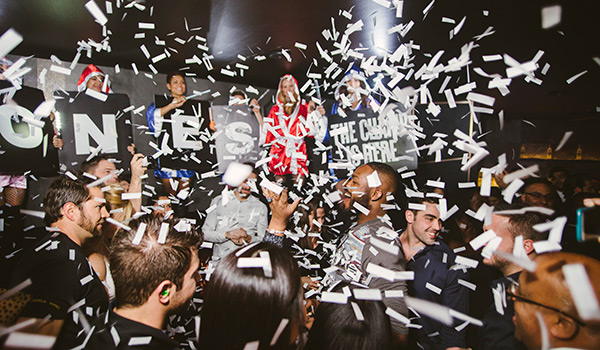 The victor was spotted high-fiving fans and posing for photos as he made his way to his VIP table located on the main stage of the nightspot’s fourth-level main room. Shortly after his arrival, Jones was surrounded by friends and fans as he was greeted by a parade of cocktail waitresses fitted in fighting robes showcasing his nickname “Bones” on giant letter cards to congratulate him on the big win. The famed fighter kicked the celebration into high gear as aerialists danced above with confetti raining from the ceiling. Jones and friends were seen sipping cocktails and talking with fellow clubgoers in good spirits as Hakkasan regular Afrojack took to the DJ booth with fan-favorite hits for an evening of musical perfection. The heightened energy became contagious and conquered the nightclub as UFC fans and partygoers alike danced and mingled into the night for an unforgettable evening of bliss. Jones celebrated into the early hours of the morning, leaving the venue around 3:30 a.m.