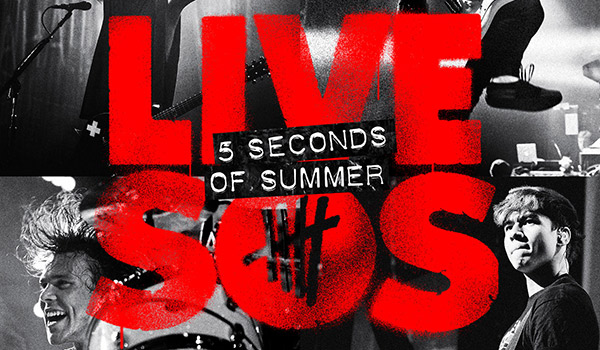 5 Seconds of Summer – who took home the New Artist of the Year award at last night’s American Music Awards – will release LIVESOS on December 15 on Capitol Records. The pre-order is underway now for the 15-track collection, which is a memento of the band’s year on the road. Recorded live at numerous shows the Australian quartet has played in the States during 2014, LIVESOS features the band performing all their fans’ favorite songs, including the hits “She Looks So Perfect,” “Amnesia” and “Good Girls” plus a cover of Green Day’s “American Idiot.” Fans will also find both a live version and a studio mix of 5 Seconds of Summer’s brand new single, “What I Like About You.” The band performed the song, which was originally recorded in 1979 by Detroit power pop band The Romantics, at the American Music Awards last night. The lyric video for “What I Like About You” premiered yesterday and can be seen on VEVO and YouTube. The single impacts Top 40 radio on December 1.

Fans who purchase LIVESOS on iTunes will also receive an exclusive bonus track, “Kiss Me Kiss Me.” The deluxe edition, which will be available only at Target, will include the bonus track “Don’t Stop.” See below for track listings.

“Playing is the thing we have been most passionate about from the beginning. All we want is for our fans to come to the shows, rock out and have one of the best times they’ve ever experienced,” says vocalist/drummer Ash. “Also, when a room is full of you guys from all different walks of life, you can let it go when you come to the shows and be free to be yourself. Anyways we love you, this is us live…You rule.”

The band will kick off its first-ever North American headline run – the “Rock Out With Your Socks Out Tour” – on July 17, 2015 at the Mandalay Bay Event Center in Las Vegas, NV. See below for itinerary.

5 Seconds of Summer played to 25,000 fans during its recent sold-out, two-night stand at the Forum in Los Angeles. The weekend performances dovetailed with Derp Con, a 5 Seconds of Summer fan convention attended by 300 contest winners who were flown in from a total of 35 countries. The festivities were held at Derp Rock City – an epic virtual world created on the Paramount Studios New York backlot. In addition to the many attractions designed especially for the event, attendees were treated to individual meet-and-greets with the band members, an intimate acoustic set and VIP access to one of The Forum shows.

The band has impressed critics across the country with its live shows. The Los Angeles Times found their fusion of “earnest, upbeat pop-rock” and “mall-punk ‘tude” unique while the Los Angeles Daily News, also reviewing one of The Forum shows, noted, “[5 Seconds of Summer] kept up the excitement throughout the set.” The New York Times praised the group’s “gleaming pop-punk” while The Detroit News observed, “5 Seconds of Summer opened the show with an energetic blast of pop-rock, punctuated by big sing-along choruses…with no shortage of big hooks to pull from, the band is on the right track.”

5 Seconds of Summer released their self-titled debut album in July 2014. It debuted at No. 1 on the Billboard 200 and logged the biggest first-week U.S. sales of any new artist debut of 2014. It has topped the iTunes charts in 76 countries and, in five short months, has sold more than two million units worldwide. In the U.S. alone, the band has sold more than 500,000 albums and over two million single tracks. 5 Seconds of Summer received five awards at the 2014 MTV European Music Awards, including Best New Artist, and took home the MTV Video Music Award for Best Lyric Video for “Don’t Stop.”