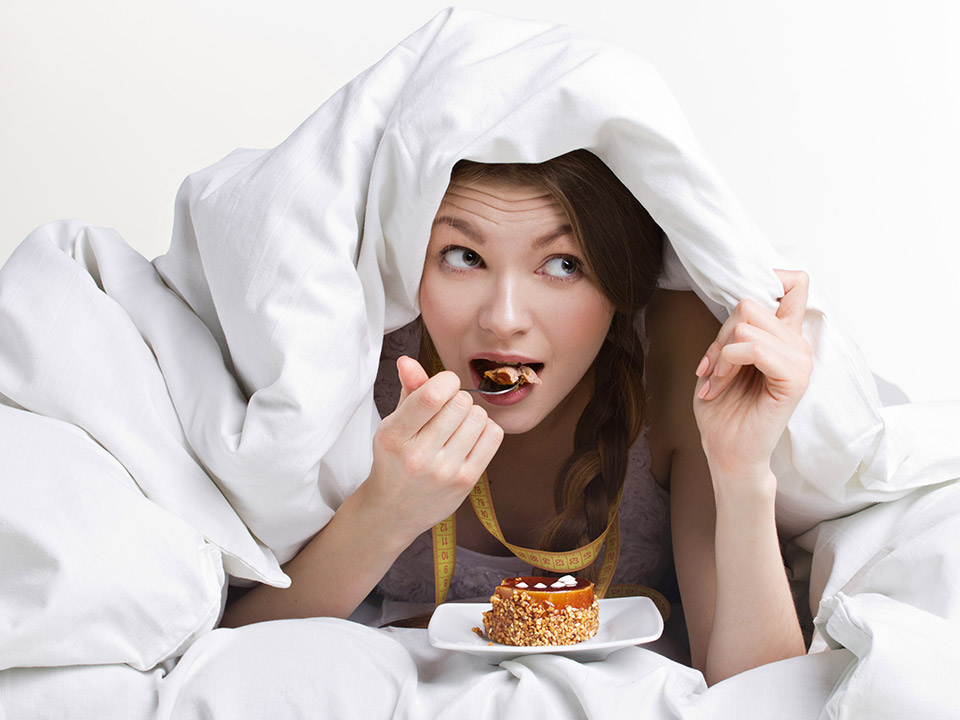 There’s a common misconception that eating before you go to bed is an absolute no-no. While it’s true that this habit can lead to acid reflux and fluctuations in weight, it’s not for the reasons most people think.

Your body is still burning energy while you sleep and your metabolism is still working at the same rate it does during the day. But making poor eating choices is what will cause you to gain weight, feel sluggish, and lose productivity the following day, not the act of eating late itself. Research shows that even sleeping too little prompts people to eat bigger portions of all types of foods.

Are you guilty of any of these six bad habits before you go to sleep? If so, you might want to consider working on breaking them for your health.

Many diets focus on intermittent fasting, not eating after a certain time, and other aspects of your day that revolve around timing. These may help force you to break bad habits, but they’re not completely necessary.

It’s certainly not the act of eating itself that is unhealthy; you need food for fuel any time of day. It’s habits that go along with eating that cause the problems. Unhealthy nighttime eaters tend to engage in at least one or more of the following bad habits.

1. Adding a bedtime snack in addition to the rest of their meals. If you’re eating dinner before bedtime, this is often your third meal. Many people use dinner as their heaviest meal when it should be the lightest. The problem comes when you have breakfast, lunch, dinner, with a few snacks in between, before tacking on a bedtime snack. It has become a common practice to grab a snack after dinner and right before you head to bed, and that snack is often something indulgent, like buttery popcorn, ice cream, or a different type of calorie-heavy dessert.

All those extra calories add up, making it highly important to keep an eye on intake and activity levels. If you’re keeping within your daily caloric intake, don’t stress the bedtime eating. But if you’re adding more calories to your day, it may be time to break the habit.

A good note to remember is that the total number of calories your metabolism burns daily is known as the total daily energy expenditure, aka TDEE. This metric is composed of three primary parts, your basal metabolic rate (BMR), physical activity and digestion. By adding up your BMR and TDEE you can better measure of how many calories you burn per day including how much your metabolism burns.

Although while sleeping your metabolic rate is at its lowest, your body does not burn as many calories as it would during the day, which is why it’s important not to excessively snack before dinner and even more so as the night falls. Till this day, scientists still don’t know why our metabolism experience a slower rate of metabolism overnight but rest assured that abstaining away from midnight snacking or in between meals, will surely keep inches off your waist.

2. What you’re doing while you’re eating can hurt, too. Nighttime is often the time when people gather in their beds or on the couch to decompress from the day. You may be watching television, scrolling through social media on your phone, playing on your laptop, or other activities to wind down for the evening. But if you’re doing this while you’re eating, you’re probably not paying attention to how much you’re taking in.

Have you ever opened a bag of chips or popcorn, sat down to watch a movie or do some work, and before you knew it the entire bag was empty? This is a bad habit that can come from other passive activities. It feels like snacking and lounging go hand-in-hand; it’s all too easy to spend several hours on social media and have much more snack food than you may have intended in the process.

Instead of accidentally eating thousands of extra calories, limit yourself by measuring out the portion size that you want into a separate dish and putting the rest up before you sit down to relax.

3. Skipping meals all day means bad choices at night. There are funny memes all over social media that joke about dieting all day and then splurging at night because you’re starving. They’re grounded in reality, however, and can be a common experience for those who want to make healthy choices but aren’t sure how to satisfy feelings of hunger while doing it.

Starving yourself all day can lead to bad choices later on when your brain is craving fuel. It makes it easier to talk yourself into that bowl of ice cream (or the entire tub) because you’ve been craving and avoiding it all day. Countless studies have shown such as one from ScienceDaily, that those who associate eating at later times, especially after 7 PM, showed to have a higher body mass index as well as greater body fat.

4. Eating three big meals instead of multiple small meals. For women especially, it’s better to eat small, healthy meals every three to four hours instead of three big meals interspersed throughout the day. If you eat healthy foods before going to bed, your stomach will feel satisfied and you’re less likely to get up to snack in the middle of the night.

5. Choosing food that is difficult to digest. Some foods are harder to digest than others, so as you sleep, your stomach is still working on breaking those ingredients into fuel. Heavy, greasy meals full of sugars and carbs are going to impact you later on as you are trying to get your rest.

6. Keeping erratic schedules. If your body is used to eating right before bed, it knows what to expect and how to handle the influx of calories. But when you have an erratic eating schedule, your body trains itself to hold onto the fats and sugars for those times when you “forget” to eat.

Keep a healthy schedule and stick to it as closely as possible. This way you train your body to expect the fuel it needs instead of always being on the alert for “feast or famine” days.

It’s Okay to Eat at Night

According to Savvysleeper, eating healthy, nutrient-dense foods at night is a good thing. The habits that surround the nighttime eating schedule tend to be where the problems lie, however.

If you’re prone to grabbing the pre-bedtime snack, analyze your habits to make sure you’re not setting yourself up for health concerns down the road.

4 Best Tips for Buying an Engagement Ring on a Budget

Greatest lies about vaping that we believe in