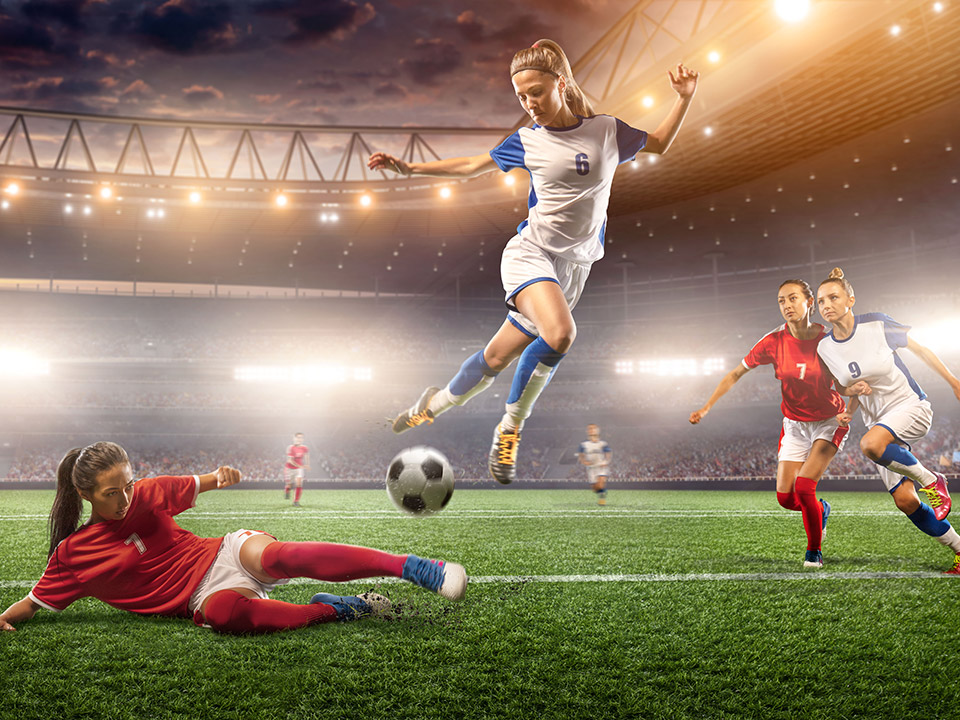 Thankfully, in the modern world in the new year of 2022, women are finally seen as powerful, competitive, and altogether just as skilled as men are in many sporting disciplines. Although there are still notable exceptions to this rule, generally, equality is certainly on the rise for women in sports, and every individual, regardless of gender, should endeavor to keep this proverbial ball rolling.
With that in mind, here, for your information and, of course, reading pleasure, is a chronological history of women in sports and sports journalism.

In around 396BC, the first recorded female sportsperson, Kynisc, became the first female sporting champion as a horse-racer, although she was banned from collecting her award in person and a male representative accepted the prize for her.

Surprisingly but wonderfully, there was a separate event in which women could compete in called the Herarean Games, which was restricted to unmarried and relatively young women. All men in the ancient Olympic games always competed naked, but the women in the Herarean Games could wear a clothing garment called a chiton, which covered their bodies’ middle and upper parts. The prizes awarded to the winners of the Herarean Games consisted of stereotypically ‘female’ items such as olive wreaths and bowls of pomegranates. Married women were banned from being audience members at the ancient Olympics, but both prostitutes and virgins were allowed to watch.

In 1896, the first Olympic games were styled on what you would recognize as the modern version of the Olympics, but still, no women were officially allowed to compete. However, a Greek woman ran the entire race the day after the Olympics were held and became an unofficial competitor, although she was not allowed to run the final lap inside the stadium, so instead ran around the outside of the stadium instead.

It is pertinent to note that, between the years 1896 when the Olympics officially began until very recently, in 1981, there had never nor never been even one single female member on the International Olympic Committee.

Throughout the last years of the 1800s, right here in the United States, groups of women began to form their own, female-exclusive sporting clubs, which usually involved croquet, archery, tennis, or bowling, and such clubs were particularly common in and around New York. At the turn of the century, men’s only clubs began to allow women to become members unofficially, but they were rarely if ever, afforded full membership status.

When the Olympic games moved to Paris in 1901, women were finally ‘allowed’ (preposterous though this is that they weren’t involved in the first place) to participate in the event, although they were only allowed to compete in certain events which were namely golf, yachting, croquet, equestrianism, and tennis.

In 1911 in Peru, a fabulously inspirational woman named Annie Peck became the first woman ever to climb the famous mountain of Coropuna and, more fabulous still, planted a large banner at the top of the mountain which read ‘Vote For Women’. Six years later, in early 1917, the Women’s Athletics committee was formed by the APEA (American Physical Education Association), which drafted standardized rules for college’s that ran women’s sports sessions in swimming and soccer. It is pertinent to note that the rules were still drastically different from those made for male students in the same sporting disciplines. Finally, in 1921, the National Women’s Athletic Association was created. Soon, women were to be seen both competing in national sporting events and given the opportunity to take classes in substantially more types of sport across the length and breadth of the United States.

One of the landmark developments in the middle of the 1900s was the establishment of the NAAf (the National Amateur and Athletic Federation), which concentrated on leveling and eventually eradicating the discrepancies between the two sexes in sport and promoted entirely ‘equal footing’ in terms of regulations, games, and standards. The development of the NAAF had a huge impact. Just two years later, over twenty-two percent of colleges and universities throughout the United States proudly possessed female varsity sports teams in various different sporting disciplines.

In 1954, an incredible lady named Louise Pound was the very first woman to be inducted into the Lincoln Journal Sports Hall of Fame for her dedication to setting new records in target practice with rifles as well as organizing the very first military company for females.

1968 saw one major ‘win’ for women in sports, when Mexican Enriquette Basilio was the highly-publicized first female to light the Olympic flame, and in the same year, the official Olympic committee began to conduct what can be only described as gender tests on each and every participant.

The Representation Of Women In Sports Today

Although there’s still room for drastic improvement, thankfully, gender equality in sport today is far better than it ever has been in previous years. Since the early 1970s, the support available for women who desire to enter the world of support has increased tenfold, and generally, members of the public are wholly accepting of women sports professionals.

Notable professional women who are excelling in their chosen sporting discipline are incredibly inspirational for young girls and adult women alike, with their tenacity, competitive nature, power, and willingness to push themselves to the maximum to achieve their goals and targets.

A History of Women In Sports Journalism

Alongside the rise and welcome balance of more and more women competing in professional sporting events, there has simultaneously finally been a shift in the ratio of men to women in sports broadcasting and reporting.

A study in 1991 conducted by none other than Sports Illustrated, found it correct to estimate that less than fifty females were working as sports journalists in the United States at that time. Wonderfully now, from a study conducted in 2018 by the producer of Fox Sports News, Bob Steinfeld, there growth in the number of females who are active in the broadcasting and reporting of sports news and events has more than doubled.

Due to the fact that women are as likely to become fanatical about a particular team or sport in general, this gives rise to demand for women sports broadcasters and reporters and means that a job as a female sports journalist is both crucial and pivotal to the growth and expansion of the medium of sports journalism in general.

Throughout the late 1930s and the entirety of the 1940s, Central States Broadcasting based in Nebraska’s sports announcer Harry Johnson encouraged his wife to provide additional commentary and double up with him during live sporting events.

The notable so-called pioneers of female sports journalists are Jeannie Morris and Donna De Varona, who both worked for the United States’ most prolific and influential news networks in the 1960’s and 1970’s.

During the NFL Chicago Bears vs. Minnesota Vikings game in 1971, Jeannie Morris, who was already a notable journalist outside of the sporting world prior, was made to stand outside the commentators’ box in a raging blizzard while commentating on the game, as the box was strictly only for men. When, finally, female sports journalists and reporters were allowed into the press and commentators’ boxes, there were still no provisions for female lavatories, and instead, the women were told to use the spectators’ public toilets instead.

Notable Female Athletes Throughout The Years

Beautifully, there are an incredible number of notable and influential female athletes that have risen to prominence due to their ambition, strength, and undeniable talent.

Afflicted with polio when she was just five years old, African American runner Wilma Rudolph was the very first American woman in just one Olympics event to win three consecutive gold medals in 1960 and earned the title of ‘world’s fastest woman’. In tennis, former world number one professional female player Billie Jean King is basically thought of in sporting circles to be the absolute best women’s tennis player that the world has ever seen and won an impressive thirty-nine Grand Slam titles in her impressive and illustrious career. In terms of modern tennis games in the Open era, Serena Williams is certainly, basically, unbeatable and is one of the biggest and most prolific inspirations, not only in the world of tennis but for women across the world and across a wide range of different ambitions.

Skiing is perhaps not the most popular or broadcasted sport of all time, but one name every fan of the sport knows is that of Lindsey Vonn, who was the first American lady to win a first in the downhill competition at the Winter Olympics in 2010.

Soccer in the United States has taken on a proverbial life of its own over the last few centuries. Now, female soccer players are finally getting the recognition they absolutely deserve. Alex Morgan, who is one of the two captains for the American Women’s Soccer Team has won two consecutive FIFA World Cups in 2018 and then again in 2019.

Wrestling, once wrongly considered to be sport that only men could partake in, has also been influenced and impacted by an incredible woman, by the name of Ronda Rousey who is both a professional wrestler and a previous mixed martial artist. Rousey was the very first woman wrestler in 2018 to be inducted into the UFC Hall of Fame.

How To Become A Sports Journalist

If you are either a retired sportsperson yourself, or an avid and passionate sports fan looking for a change in career direction, the best career choice would be to become a sports journalist.

A career as a sports journalist is one of the most exciting and simultaneously stressful job roles in the world of media, and as a result, it is important to familiarize yourself with the required skillsets and personality attributes that suit the role.

Such attributes to become a successful sports journalist include, but are categorically in no way limited to:

The Prevalence Of Digital Journalism

Digital journalism could easily be described as the future of modern journalism.

With the general public moving towards handheld tablets and smartphones to catch up on the latest sporting news and events and everything else for that matter, digital media is without doubt the preferred way of reporting and broadcasting sporting news.

There is a myriad of digital storytelling tools that a modern sports journalist can use effectively and relatively easily, and if you are committed to pursuing a career as a sports journalist, it is important to know the different types and, even more importantly, how to use them.

Some of the best examples of digital media that can produce, promote, or even create pieces of brilliant and innovative sporting journalism include:

Digital journalism is the future of the field, so it’s something that prospectus journalists need to learn to succeed.

How to Alleviate Pain at Work