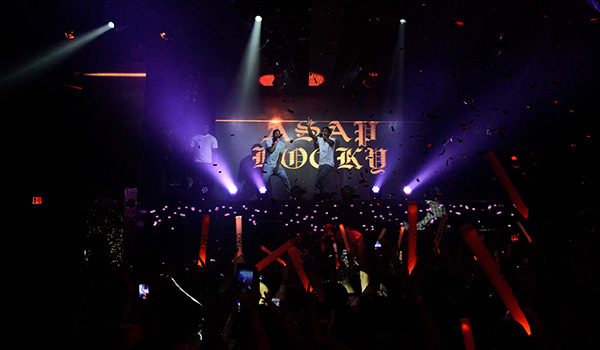 R&B crooner Miguel was spotted at TAO Beach on Sunday afternoon. Joined by his girlfriend Nazanin Mandi, he enjoyed the daytime party scene and special DJ set by DJ Khaled from a VIP cabana with a large group of friends. Sunday evening, pop singer and actress Katharine McPhee dined at TAO Asian Bistro. Joined by a group of friends, McPhee enjoyed the Mizo glazed Chilean sea bass and the crispy Snapper in the sand, making sure to mention how much she loved the food before she left. Grammy-nominated rapper A$AP Rocky dined at TAO Asian Bistro with friends. The group enjoyed several of the restaurant’s signature dishes including spicy chili chicken with pineapple and soy, roasted Thai Buddha chicken, Mizo glazed Chilean sea bass and crispy orange chicken. After dinner, the group made their way upstairs to TAO Nightclub where they took over a VIP table on the dance floor. Shortly after, A$AP Rocky took the stage to perform a roster of his biggest hits including the club anthem “Wild For The Night.”