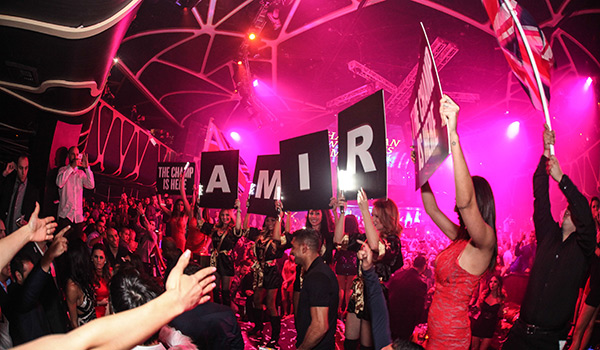 Saturday night was a knockout event at Hakkasan Nightclub inside MGM Grand Hotel & Casino as Professional Boxer Amir Khan celebrated both a victory and his birthday at the nightlife mecca among lucky clubgoers. Earlier in the evening, Khan defeated his opponent, Devon Alexander, to retain his WBC title. Excited fans greeted khan with a roaring cheer as he entered the venue. Soon after getting settled in the nightspot’s fourth-level main room, a parade of stunning cocktail waitresses appropriately fitted in boxing robes welcomed the champion with a two-tier birthday cake and custom Hakkasan champion belt to commemorate the special day. Khan was seen enjoying the evening with friends and sipping cocktails as The Bingo Players heated up the venue by providing non-stop entertainment with heart-pounding tracks.