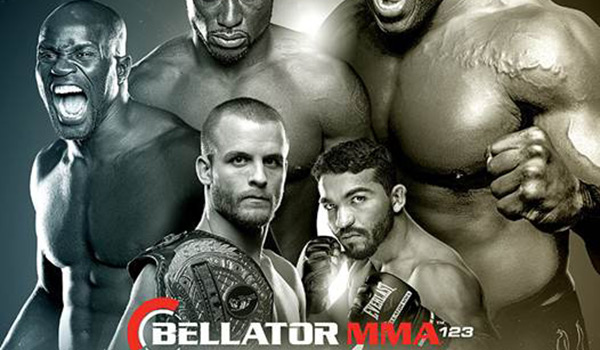 Bellator will kick-off its 11th season from Connecticut’s Mohegan Sun Casino on Friday, September 5th live on Spike TV.  The event will be headlined by the Featherweight Title fight as reigning Bellator Champion Pat Curran defends his belt against Brazilian striker Patricio Pitbull.

The night will also showcase Cheick Kongo, King Mo, the Bellator debut of Bobby Lashley and a full preliminary card.  Tickets for the event are on sale now at Ticketmaster.com, Bellator.com or by visiting the Mohegan Sun Box Office.

Kicking off the Spike.com portion of the night, will be a battle of heavy hands between Connecticut’s own Josh Diekmann and Mike Wesssel. Riding a two-fight win streak, Diekmann has recorded all 14 of his victories by finish, but will put his skills to the test against Wessel, who has recorded eight KO wins, six coming in the first round.

Season 9 Middleweight Tournament winner Brennan Ward is ready to face Tamdan McCrory in front of his home state crowd. The always exciting Ward grabbed his previous four victories with strong finishes and is anxious to step back into the cage and put on an explosive fight for the Mohegan Sun fans and end his fight with McCrory as fast as possible.

Entering the fight on a six-fight win streak, “Filthy” Perry Filkins will battle fan favorite Dan Cramer in a middleweight bout. Having not fought since March of 2013, Cramer is looking to make a statement with his return to the bright lights of Bellator but will have to hold off the powerful punching of Filkins who has won six of his eight victories by knockout.

After a pulling off an exhilarating upset win over Diego Nunes at Mohegan Sun last year, Season 10 Featherweight Semifinalist Matt Bessette returns to the Bellator cage to fight Scott Cleve. Besssette has amassed a 13-5 professional record, but will face a strong opponent in Cleve who has won six of his previous seven fights, five coming by finish.

Looking to make his mark in his Bellator debut, Kin Moy will face Steve Garcia on September 5th. Both with perfect 4-0 records, Garcia is confident heading into the fight after grabbing a 39-second knockout victory in his last fight at Bellator 121.

After a three-year hiatus from the cage, Mark Griffin will put his skills to the test against Mike Mucitelli in a light-heavyweight battle, while fellow Connecticut native Andrew Calandrelli will take on Lucas Cruz.

At only 23-years of age, Brandon Fleming will face Blair Tugman in a bantamweight battle, along with Pete Rogers Jr. vs. Phillipe Martins, and Marvin Maldonado vs. Rico Disciullo rounding out the preliminary card.

The full fight card is listed below.