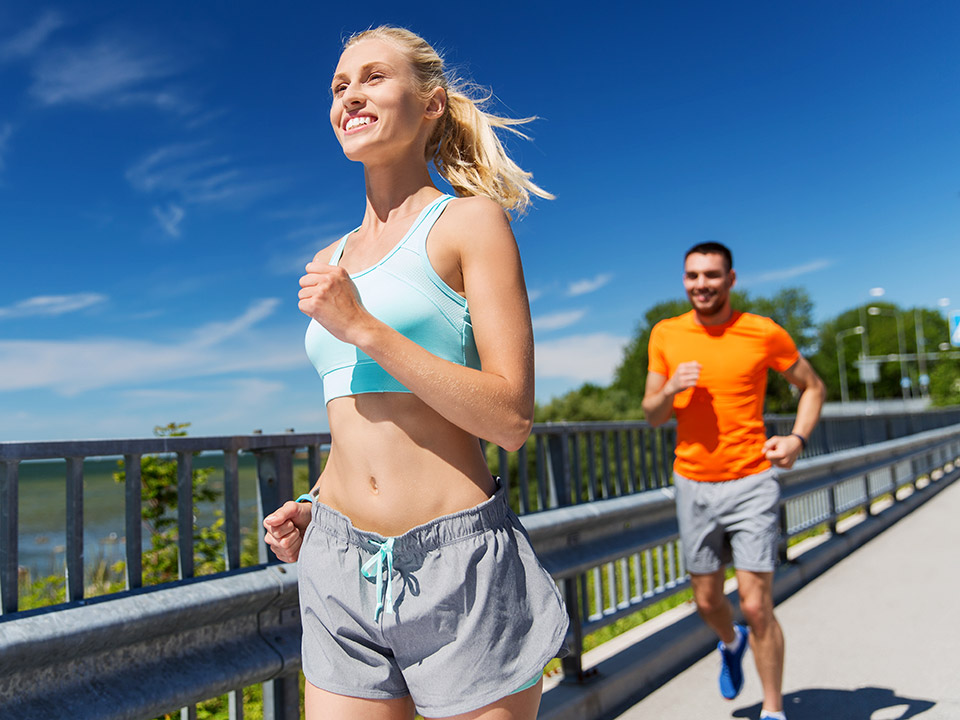 The excitement around CBD is at its peak, and nothing suggests that it will change any time soon. On the contrary, people are more into cannabis than ever because of the numerous health advantages of CBD. From lowering inflammation to treating pain and anxiety, there are many areas where contemporary people might discover solutions to their health difficulties with plant-based cannabinoids.

For many people out there, cannabis and sports may not be a meaningful pairing, but they aren’t yet aware their view is influenced by an almost hundred-year-old stigma coming from, let’s say, a mix of poor luck, prejudice, and conflict of interests. If cannabis and sports aren’t making any sense for you as well, then this one’s for you.

Well, we should start with the relationship between endocannabinoid systems and cannabinoids. The ECS is a network of cannabinoid receptors, neurotransmitters, and enzymes that exist all across your body. They are found in every organ system and regulate a variety of biological activities, including immunity, sleep-wake cycles, pain perception, and so on.

The ECS’s job is to maintain the body’s internal balance (homeostasis), which promotes harmony between the foregoing systems and guarantees a person’s health. When the ECS suffers from deficits as a result of a continuous disruption in the aforementioned balance, it may contribute to a broad variety of chronic illnesses, from chronic pain to sleeplessness, autoimmune problems, depression, and neurodegenerative disorders.

This is where CBD comes in. CBD indirectly controls their activity, guaranteeing proper functioning. CBD achieves so via the signaling of the ECS. When CBD interacts with our master regulatory network, it instructs it to generate more of its endogenous cannabinoids while decelerating their breakdown. As a consequence, the ECS can utilize endocannabinoids more efficiently because of their prolonged persistence in the bloodstream. 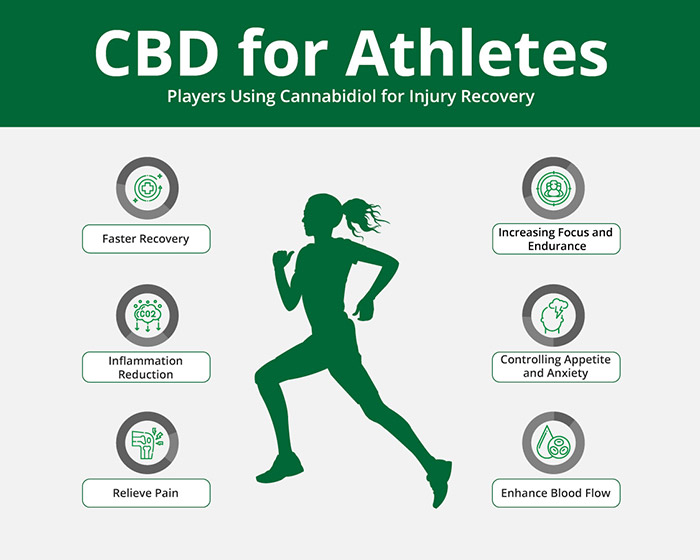 Now many of you may wonder if CBD is legal for sportsmen. The answer is YES!

CBD was removed off the list of banned drugs – in and out of competition – by the World Anti-Doping Agency (WADA) at the start of 2018. The US Anti-Doping Agency (USADA) has done the same, and they’ve created a “Marijuana FAQ” website to help people understand the laws. There is one major caveat: CBD was the only substance removed from the list of illegal substances. THC, the psychoactive component of marijuana, as well as synthetic cannabinoids, is still illegal in competition.

Research around CBD is currently limited, however, there is evidence pointing toward effective potential in the domains of pain, inflammation, and muscular stiffness. Treating situations like such may be highly vital for athletes, but notably, those in the professional sectors who might incur injury or overexertion during a sporting event.

Here are just a few reasons players might explore CBD for an extra to their sports training program,

Athletes are susceptible to sleep deprivation as a result of the high levels of stress they put themselves under during competition and while preparing for the season. Those seeking relief from sleep problems often resort to over-the-counter or prescription sleeping drugs, which may have a long-term negative impact on their sleep pattern.

CBD may help in maintaining the sleep cycle of the body by lowering stress, anxiety, and discomfort. So, next time consider CBD for sleep deprivation instead of sleeping pills.

Physical exercise may also help to lower cortisol production. The adrenal system, which generates the stress hormone, controls how the body reacts to physical stimuli like exercise. CBD inhibits cortisol secretion, lowering cortisol levels in the bloodstream. This might help athletes recuperate faster, making CBD the pinnacle of post-workout supplementation.

The innovative reservoir design of ENVEED CBD-INFUSED Pain Patch provides a barrier between the pain-relieving ingredients and the pressure-sensitive adhesive to prevent the oils and natural enhancers in the pad from mingling with adhesive materials.

A small amount of inflammation may be healthy for athletes and assist trigger favorable training adaptations. Too much inflammation inhibits recuperation and hampers performance. There are CB2 receptors in both the brain and periphery, although they are more prevalent in immunological organs. Cannabinoids binding to CB2 receptors may have an anti-inflammatory impact by lowering cytokine (cell messengers) synthesis. In other words, CBD coupled to CB2 receptors assists in turning down the reaction when your immune system shouts the alarm after intense exercises.

You can find unique anti-inflammatory CBD products from ENVEED. They have Kinesiology Therapeutic (KT) tape in their assortment, which is used to support and reduce discomfort in muscles, joints, and/or ligaments. It decreases inflammation, promotes movement, and accelerates recovery.

3. CBD Is Used For Pain Relief

Athletes are troubled by muscular aches and injuries and so they commonly turn to non-steroidal anti-inflammatory medicines (NSAIDs), such as ibuprofen or naproxen. In extreme situations, physicians may administer opioid-based pain relievers, but these treatments are dangerously addictive and may further exacerbate the disease, not to mention the significant risk for misuse and addiction.

CBD, on the other hand, provides a safer method to battle pain. Not only does it lower inflammation, but it also works on vanilloid TRPV1 receptors and opioid receptors to modulate pain signals in the brain. As a consequence, the discomfort becomes tolerable. Another receptor related to pain modulation is the 5-HT1A serotonin receptor, whose activity also happens to be altered by CBD.

ENVEED has specifically kept athletes in their minds while designing their products. Including CBD they also use other supper plants such as arnica, menthol, daikon, radish, and aloe vera.

4. CBD Can Increase Focus And Endurance

CBD, in addition to its anti-inflammatory and pain-relieving qualities, may improve the user’s energy, attention, and performance. People who use CBD before working out report the sense of being able to concentrate on the here-and-now. CBD may be beneficial if you run long distances, lift weights, or participate in activities that demand endurance.

5. CBD Can Be Used For Appetite Control And Anxiety

CBD may help athletes regulate their hunger by controlling the function of the ECS. If you wish to shed body fat more effectively, CBD will deliver emotions of peace and relaxation without creating cravings. Unlike THC, CBD is contemplated as a modest appetite suppressor. If you have difficulties with compulsive eating, CBD may moderate that behavior by acting on your GABA-A receptor, which is kind of a handbrake for the brain when it becomes over-excited.

There is a vast body of evidence, including human clinical studies, supporting CBD’s usefulness for anxiety-related diseases. Athletes, much like other persons placed under frequent stress, suffer from periodic moments of anxiety, maybe triggered by social pressure, pre-game fears, and injuries.

The scientific literature reveals how CBD oil may help lower anxiety in people with a social anxiety disorder. Furthermore, CBD may diminish the intensity of traumatic memories, a characteristic indication of Post Traumatic Stress Disorder.

Lastly, you’ll start seeing windows of opportunity to grow as a sports person both physically and mentally once you get rid of the stigma-driven presumptions that cannabis and sports don’t belong in the same sentence. As scientists pour more money into research on CBD’s health advantages, we may soon learn about new ways CBD oil might help people who lead active lives. Cannabidiol is a great supplement to add to your supplement arsenal whether you want to relieve pain, promote regeneration naturally, or push yourself to new boundaries.

7 Reasons To Create An Outdoor Kitchen

3 Things You Should Know About Hit and Run Accidents

Want to Make Ice Cream at Home? Here’s how