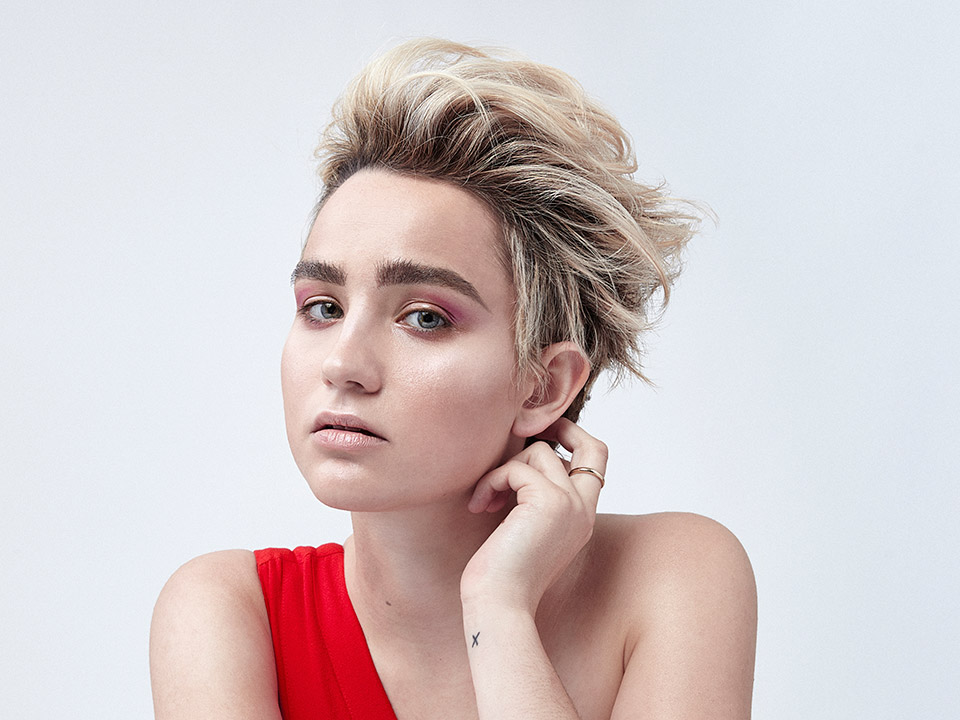 Check our interview with gorgeous and very talented actress Bex Taylor-Klaus who can be seen on the second season of popular MTV’s show “Scream” as Audrey Jensen. Also on the DreamWorks/Netflix series ‘Voltron: Legendary Defender” based on the iconic 80’s cartoon series and action figures.

The stand out actress, is best known for her role as ‘Bullet’ on AMC’s series “The Killing”.

There was a shakespeare after school program when I was in 3rd grade, and I fell in love with it.

No but I went to acting camp.

What’s the best part of being an actress?  And worst?

Best: Doing what I love everyday and getting to call it work.
Worst: Having to spend long periods of time away from the people you love.

Yes, my cousin is a producer’s assistant who wants to be a producer and another cousin is graduating this year with a degree in film.

I always thought it would be cool, but never thought it was a viable career choice, and someone told me it was but that I shouldn’t try. So I kind of wanted to show them I could. I liked the challenge of fighting for it and getting to do what i love to do.

What has it been like to be part of “Scream” cast?

Absolutely amazing. Best cast in the world, these people are amazing.

Why do you think is the success of the series? And what we can expect of season 2?

Because everyone wants a little fear, a little mania in their lives, and if it’s in a controlled way people like it even more.

The season does a good job of playing with suspense, there’s more gore and mania and  craziness, new twist and turns, always something new in the next episode.

Right now what comes to mind is waiting in noah’s closet on set, for 30 minutes and trying to scare him but then failing miserably.

And now tell us about your DreamWorks/Netflix series ‘Voltron: Legendary Defender”?

Voltron is a reimagining of the classic 80’s cartoon and it follows 5 pilots and an alien princess as they defend the universe against all scary things while in a giant mechanical lion.

And about your role as Bullet in the hit show “The Killing”?

Bullet is a tough streetwise homeless kid in AMC’s the killing and I miss her, because she was an amazing opportunity and just such a great role to be able to portray.

Sleep and a fort.

To be honest I don’t watch much TV, I mostly watch streaming sites, but I like older shows and horror movies, but I need a buddy for that since I’m a jumper when I watch scary movies. I really like Netflix’s Lady Dynamite right now.

Meryl Streep, I know it’s a cop out actress, she pumps out perfect work shes so inspiring. Also Emma Thompson because she knows how to play different characters, and how to play to her strengths its admirable.

5 years from now travelling, ideally to small places like rural europe and see the world that hasn’t been altered.

Its fun, I dont want to say it’s important because yeah, some things are helpful but it’s not necessary, it is important to be social in real life not just online so it’s fun for me more than important.

Quote: “Dont let the fear of striking out keep you from playing the game”.

Movie: Silence of the lambs.

Sport Team: I’m a fan of the game, even if it a team I love playing against someone i don’t normally love, and the other team is playing a good game I will cheer for them. I appreciate a team that plays well, not always one team.