From Barbie commercials to playing a doomed vampire slayer on hit show Buffy, Bianca Lawson’s star has certainly risen over the years.  The 34-year old actress it seems is always on our screens with roles such as Emily Bennett on The Vampire Diaries, Maya St. Germain on Pretty Little Liars, Marin Morrell on Teen Wolf and starring and co-producing House of Secrets on Lifetime.  When she’s not near a camera, Bianca who is from LA is leaving an impression in another way: by volunteering. She’s passionate about working with a variety of organizations that help causes like homeless children and animal adoption. With her good heart and outgoing personality, it’s completely understandable how she’s endeared herself to TV audiences for more than two decades.  We at Naluda were certainly charmed.   Catch Bianca now as Teen Wolf returns to MTV.

What was the very first commercial you appeared in?

Barbie when I was 9 years old!

Your great Uncle is Berry Gordy Motown founder, do you have any interest in Music in any way?

I think music is really healing. I make it with friends in a personal creative outlet kind of way.

Your first big break in acting was in hit TV series “Saved by the Bell” when you were 14 years old, how was that experience as a young adolescent?

Extraordinary. 14 years old with your face on a rice krispies box? It was heaven. Anytime you are in the midst of the manifestation of a dream, a hope; something that was merely an idea just moments before. Always blows your mind.

As as teen star yourself do you feel there is a lot of pressure as a young Hollywood actress, How did you deal with it yourself?

I put a lot of pressure on myself actually. When you’re young, everything is magnified anyways. I think the best way to deal with it is to try and keep a proper perspective, try to keep a really clear distinction between what’s actually important and what is not. The work to me was the only important thing, all the peripheral stuff I could take or leave.

How did you find the transition from child star to adult actress?

Gosh, I don’t know. I’ve never thought about it that way for myself. I didn’t view myself as a “child actor”- just an “actor”.

In your quick facts on this interview you mention the 80’s as being your best era, can you tell us why and give us highlights about the best parts of your childhood years?

Well, lets see… one of the first things that comes to mind is my aunt Gwen. She died from breast cancer when I was 12. She was my best friend and a second mother to me, so the memory of her has a great deal to do with that. Also, my parents were very supportive of my interests so I was taking violin, piano, dance, art classes, everything. It was a very creatively full, rich time. My mom would put on classical music and leave me to my easel for the rest of the day without interruption. We also had a house full of people. A really amazing band that my parents managed lived with us as well as various other friends and family members at different times. We had a pool that was drained to skateboard in. my brother always had crazy friends over. So it felt like I was living in this really inspiring, stimulating community. And no one treated me like a kid. My contribution was supported in a totally equal and enthusiastic way. There was a lot of love. So I associate the 80’s with love.

In 1998 you appeared in the The Temptations as Diana Ross, you are cousins with Rhonda Diana’s daughter, did you consult the role with Diana at all?

No. I watched a lot tapes.

My preference is good material, wherever I find it.

What would be your dream role?

What would you have liked to pursue as a career if you were not an actress?

How do you keep yourself in such good shape, do you enjoy working out? Tell us, what is your secret to looking so good?

I’m actually quite bad about keeping up any sort of routine. If I exercise, I do it more for the emotionally therapeutic benefits, which feels amazing once its over. I try to not eat crap everyday. I don’t lay out in the sun. I’ve always been a massive water drinker (even as a child). My lifestyle is pretty simple.

Any plans for Valentine’s Day?  Will you be sharing it with someone special?

Who are your biggest fans?

You have been starring in Teen Wolf since 2012 as teacher Ms Morrell, it must be amazing for an actor to be part of such a solid and popular TV series, tell us about it?

It is amazing. And with this particular series, it seems like it’s still evolving, still growing. I feel like each season gets better and better. Some shows are their best in the first season and then get stuck trying to recreate that. I think Jeff Davis has been very bold and brave with this series.

Well, it’s based on a true story. My character Julia, she divorces her abusive husband and inherits the house that he had been renovating for them. She moves in temporarily with the intention of selling it once the repairs are finished. Strange things start happening in the house and she’s not sure if it’s her imagination or if there truly is something sinister going on. Several potentially suspicious people enter her life and she spends a lot of the movie trying to decipher who is an ally and who is an enemy. Ultimately the story is about trusting yourself, your instincts and having the courage to leave the past behind and begin again. It’s a story about rebirth. Yes, this was my first time starring and producing. It was stressful and wonderful at the same time- and transformative. Now that I’ve tasted what that’s like- to really be a part of the entire creative experience from inception, beyond just being an actor- I’ve been bitten and never want to go back.

How has your career planned out in accordance to your “dream”?

Hmm… well, a lot of my goals as a child I met and then had to make new ones. I’m still in the middle of my career so it’s hard to say. There are a lot of things I still want to do, so I’ll get back to you in ten years. 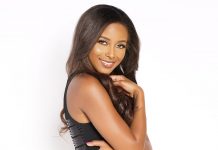 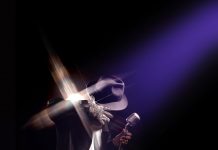 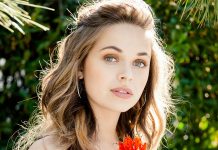