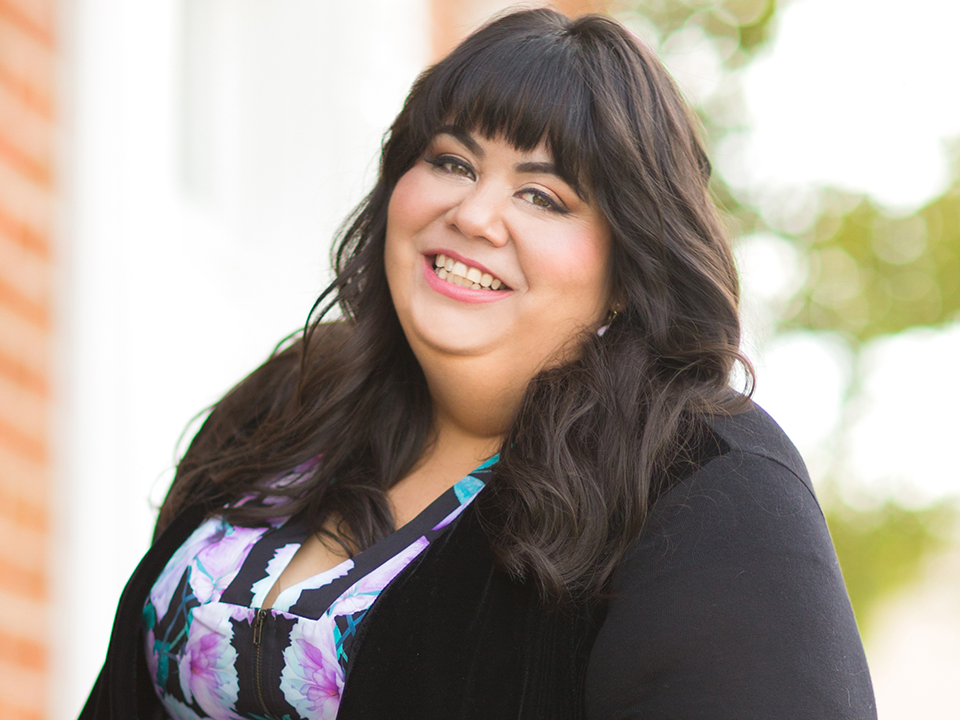 Our interview with Mexican-American actress Carla Jimenez who can be seen on Fox’s new sitcom “The Mick,” playing a housekeeper for three rich kids who are being raised by their drug-addicted ‘Aunt Mickey’ (Kaitlin Olson).

Carla Jimenez brings depth to what could have been a boring stereotype. In her acting career she has played six nurses, at least one maid, and three characters named ‘Rosa’ on sitcoms like ABC’s “Desperate Housewives,” FOX’s “Raising Hope,” NBC’s “Last Man Standing” and the comedy film NACHO LIBRE.

Hi Carla, please tell us a little about you?

Ooh not sure what you’d like to know! LOL I grew up in Simi Valley. I have 3 older sisters (the oldest 2 were born ONE year apart!) I have 2 cats I love dearly, Joey & Max.

I always loved singing so I did that growing up and when I got to high school I started doing musicals and plays. After high school I joined a community theater in Moorpark California and started doing semiprofessional theater and from there I just started finding bigger theaters and getting agents and working my way up.

Oh there is too many to name BUT if I’m being PRESSED it would be Tina Fey. But that’s if we’re talking about comedic actresses. Her writing and comedic timing has always left me so amazed and I really look up to her when it comes to being fearless while performing. I mean I could also say the same for our show’s lead Kaitlin Olson or Melissa McCarthy, Amy Schumer, Kristen Wiig, Aidy Bryant, but there’s not enough room here to list them all!!! And don’t get me started on the MEN….you’d need another magazine to print them all LOL!!

All of the above…for all the same reasons.

How did you got selected for Fox’s new sitcom “The Mick”?

Well I auditioned, was asked to come back to chemistry read, and from there I was
Chosen. It was a super fun process.

The Mick is about Kaitlin’s character MICKEY, who assumes responsibility for her sister’s children when her sister Poodle flees with her husband to avoid tax evasion.

Tell us about your character Alba?

Alba is the housekeeper & nanny to the Pemberton children, and is basically living a life as “invisible help” until Mickey comes along & shakes up her life.

Those were four different experiences and all fun in their own ways. Desperate housewives was amazing getting to work with Marc Cherry & Eva Longoria (who was great to work with). Raising Hope gave me a chance to once again work with Creator Greg Garcia after I had worked with him on MY NAME IS EARL. Greg has a tendency to hire performers he’s worked with in the past, creating this sense of family & loyalty. He’s an awesome man that way. Last Man standing was supposed to be a “one episode” deal, but it worked out great in such a way, that they kept bringing me back. It was particularly fun because its shot in front of a live audience (which feels a lot like theater, which I love). “Nacho Libre was an amazing because I got the chance to work with Jared Hess who had done NAPOLEON Dynamite (one of my favorite movies) & Jack Black who was one of the NICEST actors I’ve ever met. ”

What are your favorite TV shows?

Ooh I got ALOT! Unbreakable Kimmy Schmidt, Game of Thrones, This is Us, House of Cards, Orange Is The New Black, to name a few.

I really love MANY songs for different reasons, Green Day’s Good Riddance (Time of Your Lie) sticks out in my mind because it’s about the choices we make in our life, and sometimes we can’t always know where we’re going & life makes the choice for us.

Who has been the biggest inspiration in your life?

My dad. My mom had a stroke when I was younger. He took care of my mother, me & my 3 older sisters, while still working a full-time job. He still laughs all the time & I just think he is the strongest person I’ve ever known.

I am hoping to still be working and laughing on THE MICK …and maybe getting my own home.

EVERYTHING! I am particularly fond of 80’s music

Hmmm right now I just want go to sleep (I’m a little tired, been up since 5:00am LOL)

It’s a quote I read ” Holding onto anger, is like drinking poison & expecting the other person to die” (meaning NEVER hold onto anger. Acknowledge it, then let it go because it serves no purpose in your life)

If you had a time machine what year would you go back to and why?

I would back to the 1984, those were good times

Do it because you love it. When going into an audition, leave all the crap about who’s in the room, who’s up against you for the part, or how “important it is to book it” behind. Just go in there, give the BEST READ YOU CAN DO, then leave and know you did what’s required of you as an actor. Doing that will calm you & focus you on what’s important.

Quote: “And the day came when the risk to remain tight in a bud was more painful than the risk it took to bloom” – Anais Nin

TV Series: It was Downton Abbey, but now that it’s over….GAME OF THRONES!

Sports Team: Hmmm…not really into sports. Ask me about my Favorite Musical LOL (btw it’s IN THE HEIGHTS)