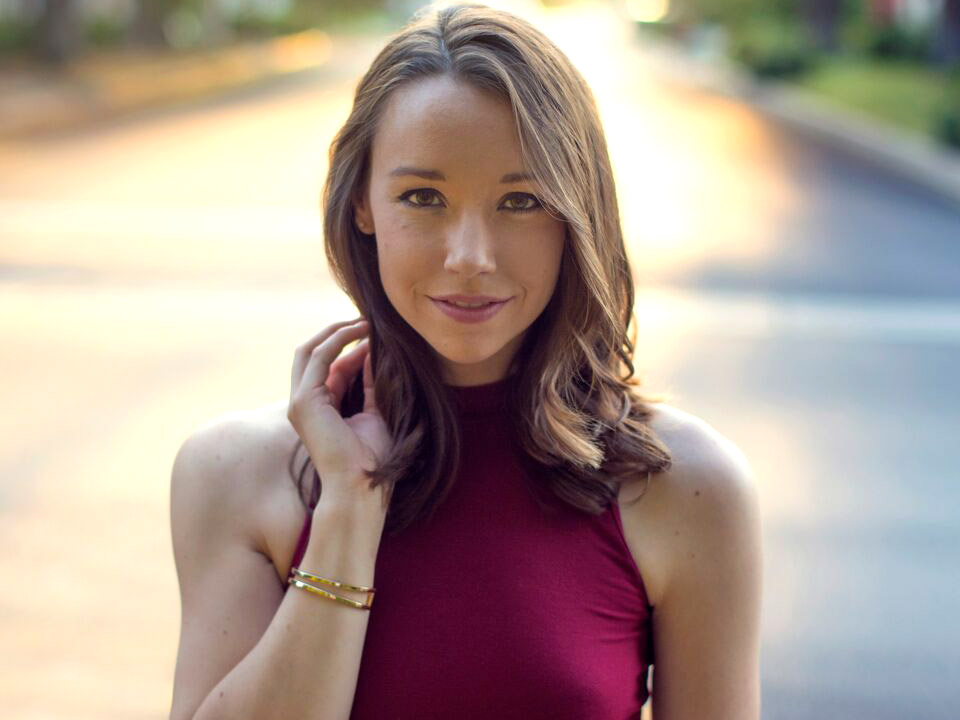 Born and raised in Colorado Springs, Caroline Barry discovered her love for performing at only three years old. Reminiscing about her childhood, Caroline recalls putting on puppet shows for her parents, directing her brother in renditions of Hansel & Gretel, and her first play at age 5 when her only line was, “Pizza!”.

Always the precocious child, Caroline started a children’s theater company at the young age of eleven. Every year for three years, she chose a musical (they sung a capella), adapted the script, and lead one week of rehearsals before the big performance. Her mom helped her to organize the event by hanging sheets around the garage to mimic a theater, setting up lawn chairs on the driveway for neighborhood guests, and getting the local newspaper to show up and support the show. It was around this time that Caroline’s family realized she was destined to be a star.

In middle school, Caroline was very active in theater, speech and debate, and pageants. At the end of 8th grade, she starred as Alice in Alice in Wonderland, which was a turning point for her. With the help of a few wonderfully supportive teachers, Caroline made the decision that she wanted to pursue acting as a career. In high school, she participated in plays and studied at the Denver Center for Performing Arts, but she also focused her energy on lacrosse.

Caroline went on to attend The University of Colorado where she received her BFA in acting. During college, she taught theater to children and fell in love with working with kids. She performed in The Tempest and Twelfth Night with the Shakespeare Touring Show, which also had an anti-bullying program. Following the performances, there were workshops that revolved around the topic of bullying and how to deal with it, using the characters from the play as examples.

After graduating college, Caroline moved to Los Angeles to pursue her dreams of becoming an actress. About a month after her re-location, Caroline found a posting for an audition by director Timothy Hines, who was searching world-wide for his next big star. Out of 8,000 hopefuls, Caroline made the biggest impression. Timothy knew that she was the one to play Nellie Bly in his film 10 Days In A Madhouse – The Nellie Bly Story. Caroline was overwhelmed, shocked and thrilled when she received the good news.

Outside of her undeniable acting talent, Caroline also loves sports. She played lacrosse for seven years and earned the title of State Champion numerous times. Caroline currently teaches karate to children several times a week, and enjoys being adventurous in the great outdoors. Having grown up in Colorado, Caroline loves hiking, rock climbing, mountain biking, river rafting, skiing and backpacking.

Hi Caroline, please tell us about you?

I’m an actor here in Los Angeles, but I grew up in Colorado. I fell in love with acting when I was young and decided to move to LA when I graduated from college. After a month in LA, I auditioned for the role of Nellie Bly in 10 Days in a Madhouse, got the role a month later and life has been non-stop ever since. I love it!

I’ve been performing for as long as I can remember – in living rooms, garages, really just any large, flat surface was my stage. Growing up in Colorado, my family always took me and my brother hiking in the mountains. Now, I love hiking, but when I was 4, it was incredibly boring…you just walk. So I would pass the time by looking for big rocks where me and my brother could perform.

Did your family support your decision to become an actress?

My family is so supportive! Like any parent would be, I think they were a little nervous for me when I first moved out to LA on my own, but they have always been my biggest fans and biggest supporters every step of the way. The second there’s any news or article about me, or a project that I’m involved with, my mom knows about it right away, usually before I do!

My first role was when I was five, I was cast in our local theatre’s production of Wizard of Oz, and I played a Munchkin.

What is some advice that you would give to someone aspiring to become an actor?

My advice to someone who wants to be become an actor would be to just act as much as you can. I always think of acting like a sport, you have to practice. And other than that, just to love it and don’t take it for granted. I think every second you get to do something you love is a blessing!

Just three? If I had to choose, I would go with Nicole Kidman, Viola Davis, and Naomi Watts. They all have very different careers, but I love the variation in their work. Each one really transforms into their characters and I would love to work with them!

Tell us about your newest project 10 Days In A Madhouse – The Nellie Bly Story?

10 Days in a Madhouse is the incredible true story about a journalist known as Nellie Bly, who went undercover in 1887 into one of the most dangerous insane asylums in New York City. She risked her life to do this, and she ended up making a huge impact that changed the course of history! I feel so fortunate to be a part of this movie. I’ve watched it with different audiences and I’ve witnessed people really be transformed and touched by Nellie Bly’s story and her bravery.

How challenging was it to play the role of Nellie Bly?

It was an extremely challenging role! It’s always tricky to play someone who really existed and really lived through these experiences. But it was fun because there were a lot of different layers to play with. First you see Nellie trying to get committed into the asylum by pretending to be crazy, and then she tries to help her fellow patients while not being found out by the doctors and nurses. It was fun for me to act in all of these very different, emotionally layered moments.

How difficult was it to get the role? How was the casting process?

For the casting of Nellie Bly, they actually did a world-wide star search. 8,000 plus actors from all around the world submitted audition videos competing for the role. When the director called me to tell me I got the part, I thought it was a hoax call, maybe one of my friends pulling my leg. When I figured out it was real, I couldn’t believe it! It was definitely a “pinch-me” moment.

What’s next for Caroline Barry?

I’m actually working on a second film with the director of 10 Days in a Madhouse, Timothy Hines. He is incredibly passionate about the stories he tells, and I have a great working relationship with him. We speak the same language on set, which is hard to find and so important for a director and actor. More details will be announced soon!

Getting to know Nellie Bly has really impacted the way I see the world, and the stories I want to tell. I really want to continue working on films with an important message and that can make an impact. Also in the next few years, I would love for my allergies to disappear so I can adopt a cute little kitten!

I’m not sure if I have a typical day. Usually I’m out and about auditioning, rehearsing, working out, being with friends, and I guess if I’m not doing that, I’m sitting at home wishing I had a kitten. I’m really stuck on the kitten right now.

My beauty inspiration changes all the time, just by the day and my mood. Lately I’ve really been loving the fun, edgy style of Cara Delevingne mixed with the classic, elegance of Audrey Hepburn. I think those two styles merged together is really cool and glamorous.

You can’t make everybody happy, you aren’t a jar of Nutella.

I love hiking, going to the movies, martial arts, working with kids, and I’m a huge nerd for puzzles.

Restaurant: Anywhere with an all day breakfast menu!

Celebrity crush: Maybe more like an actor crush, but Michael Fassbender is an amazing actor!

Food: Indian Food…or anything with chocolate, it’s a toss-up.

Movie: Lord of the Rings

Music: Anything I can sing along to!

TV Series: Survivor (yes, it’s still on). I’ve loved watching it with my whole family ever since I was 8 years old.