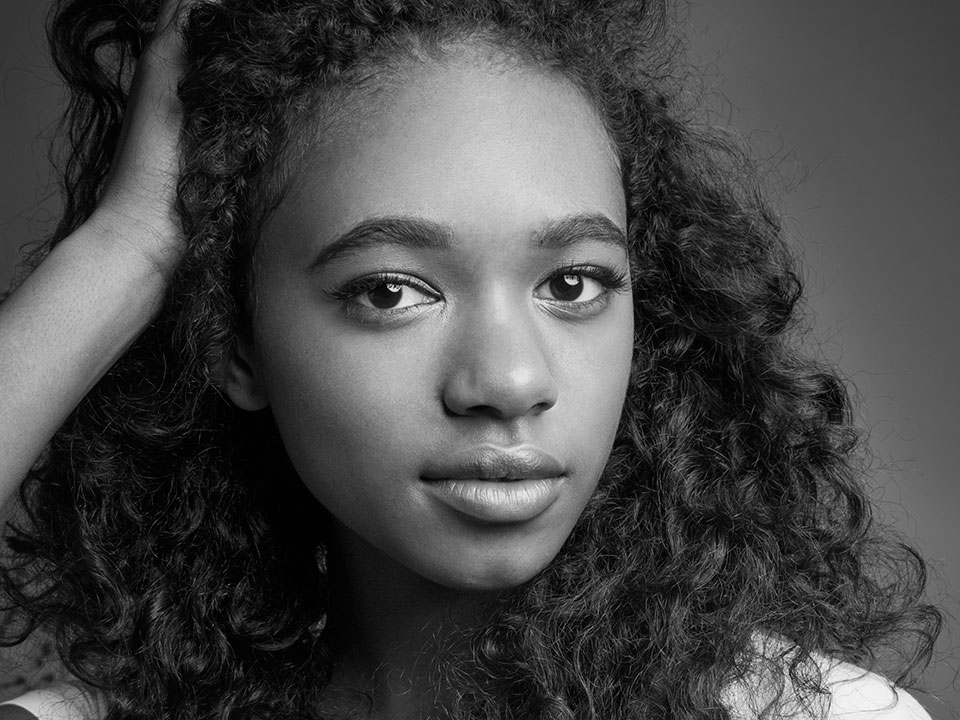 Chandler Kinney can be seen next on as ‘Catherine Dillman’ on Amazon’s “Gortimer Gibbon’s Life on Normal Street.” The show is currently shooting and will be released on Amazon in 2016.

Chandler is best known for Battlefield America and his additional television credits also include “90210”, “Haunted Hathaways”, and “American Horror Story.”

Chandler has also been dancing since the age of 3. She has trained extensively in ballet, pointe, modern, and contemporary, Horton, jazz, tap, hip-hop and flamenco.

She has won many honors and competitions along the way and has trained with the Los Angeles Ballet Academy, the Debbie Allen Dance Academy and the Kirov Academy of Ballet in Washington DC on scholarship. She began her acting career at age 9 and studies with the Marnie Cooper School of Acting.

Hi Chandler, Tell us about you?

I’m 14 years old and will be a sophomore in high school this Fall. I was born in Sacramento and moved out to LA when I was 1. I started dancing when I was three and acting at age 9. I love acting and working on projects, and when I’m not filming, I enjoy training in martial arts.

I actually started acting through dance. Through my dance studio I successfully auditioned for plays and commercials. So it seemed natural to start taking acting classes and I really enjoyed it. That’s how it all started.

Yes, I do take acting classes when my schedule permits. It very important to regularly exercise your craft.

When did you first know you wanted to become an actress?

Being an actor is a very tough job. Sometimes, things would be difficult but I’m glad I pushed through. I’m not exactly sure about when I truly knew that acting was what I wanted to do for the rest of my life. I didn’t wake up one day and say,”I’m going to be an actor.” It was an ongoing process, or journey that lead me to the final decision.

The first professional job that I had was for GAP. I filmed two national commercials and an Internet spot. I met some great dancers and actors! We filmed at Sony Studios and we had a week of rehearsal before we even filmed it! I remember being “in awe” of everything. Every morning, I was super excited to go to set. Saying that it was really fun is an understatement.

Sometimes, the scariest part of an audition is sitting in the lobby, waiting for your turn. My advice to anyone who is starting to audition is to not just sit and reread your dialogue over and over until it’s time to walk in. That’s the best way to build up your nerves which is exactly what you want to avoid. Trust me, I learned this the hard way. Get up, walk around a little, get some water and just relax. Keep your mind focused on what you’re doing, but don’t over think it.

Tell us about your character in “Gortimer Gibbon’s Life on Normal Street”?

I play the the role of Catherine Dillman on Gortimer Gibbon’s Life on Normal Street. She’s very passionate about her education. She’s the girl who is extremely excited for the first day of school. She takes pride in the fact that people take her very seriously. Although Catherine is focused, she has a fun side that develops more throughout Season 2.

How did you got involved in this project?

My manager sent over the audition for the role of Catherine, so I watched the pilot which had been released on Amazon Instant Video. I immediately was intrigued by the project. I really liked the acting style and thought it was close to my own style. When I watched the pilot, I remember thinking about how fresh and natural it was. So I auditioned, got a callback, and booked the role. I started filming the next week!

And how your life changed after the success of “Battlefield America”?

After the release of Battlefield America, I wanted to be on set again. Once you finish filming a movie, it feels weird to have time off. Seeing the movie in theaters gave me confidence in myself. Having that experience made me stronger in a lot of ways and I am very grateful for it.

Three actors I would really like to work with one day are Julia Roberts, Meryl Streep, Halle Berry. They are extremely talented and intelligent women.

How do they memorize so many lines?

Line memorization is much easier said than done. You need to memorize what to say but have it sound like it’s the first time you’re saying it. Reading through scripts several times helps me pick up lines. Sometimes I will write out my dialogue and that helps a lot too. I always read my lines out loud before going to sleep. That is “a must” for me! It’s a small thing that only takes a few minutes but it makes a big difference.

We know you are also a professional dancer, tell us about that?

Yes, I also dance professionally. I have done many national dance commercials. When I’m not filming, I dance almost 30 hours a week! I do ballet, pointe, jazz, contemporary, and hip hop. In April of this year, my team and I qualified to compete in YAGP, or Youth America Grand Prix, finals in New York. We had so much fun and we placed in the top 12! My dance team supports me in what I do and I love them so much!

Do you prefer acting or dancing?

I love both acting and dancing! They’re both so different that it’s hard to compare them! I have been dancing much longer, but I want my main career to be in acting.

Also you did a campaign with Gap, do you still modeling?

I did some modeling when I was younger but stopped for a while to focus on dance and acting. Now I am working on getting back into modeling! It’s a whole other world that I’m excited to re-enter!

What else may fans look forward to from you next?

Right now, most of my time and focus is on Gortimer. Fans can look forward to new episodes from Season 2 soon!

Some of the best advice I have received is to just be confident in myself. Confidence is key.

When I’m not acting, dancing, of training in martial arts, I enjoy painting, cooking, reading, and writing. Though I’ve been too busy to go recently, I love archery! One day, I would love to shoot from horseback, but that is just another dream of mine!

If I was to turn on your iPod right now, what five artists/songs would I see on your recently played list?

Bad Blood by Taylor Swift, Shut up and Dance by Walk the Moon, Listen by Beyoncé, See you Again by Wiz Khalifa, And Sugar by Maroon 5.

I’m working on a few things. I’ll keep you posted!

Where do you see yourself 5 years from now?

In 5 years, I can see myself as a regular on a TV series or filming an action movie! If not, then I will be in college!

Social Media is an interesting thing. I enjoy being a part of Social Media because you can express yourself and share about what you have going on in your life. It is great for spreading the word of upcoming projects and getting people to know and talk about them. However, I think people should be careful about what they post. If you put something online, it is out of your hands, and I believe some people can forget this at times. Overall, I do enjoy the benefits of Social Media and keeping fans updated!

Quote: Shoot for the moon and if you fall short, you’ll land among the stars.