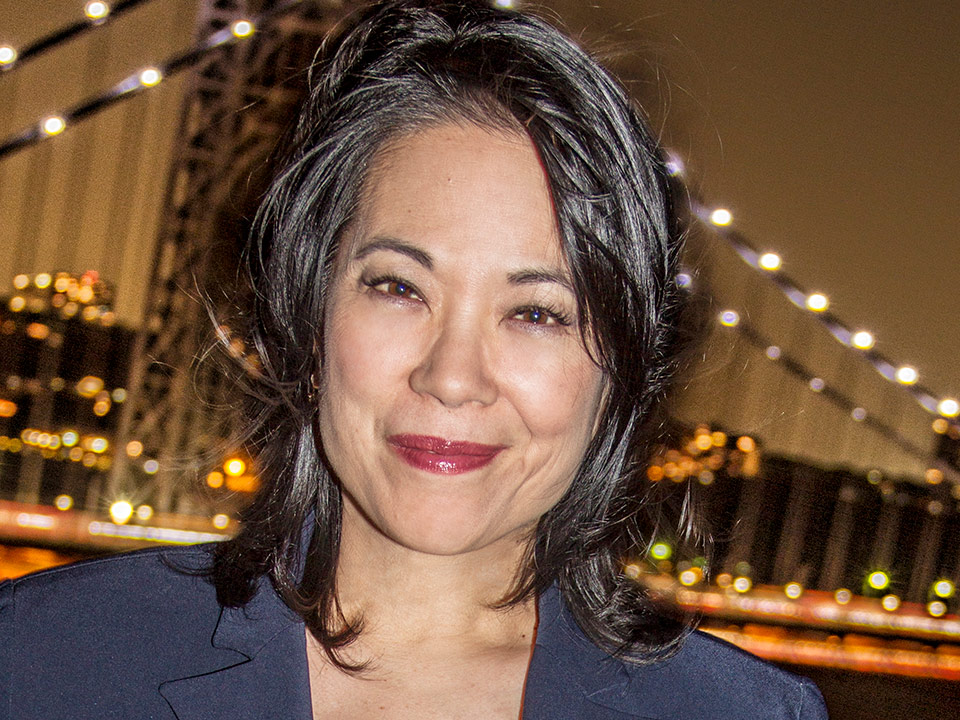 Our interview with multi-talented, award-winning actress, playwright, director and an advocate for inclusion, Christine Toy Johnson (FX’s “The Americans”) who recently returned to the stage for the national tour of the award-winning musical COME FROM AWAY. Starring as ‘Diane,’ the highly-acclaimed show also stars Kevin Carolan (Newsies) and James Earl Jones II and recently launched their Northern American tour in Seattle at the 5th Avenue Theatre. The musical tells the true story of 7,000 stranded passengers and the small town in Newfoundland that welcomed them. The show began performances on Broadway in February 2017, and officially opened to critical acclaim on March 12th at the Gerald Schoenfeld Theatre in NYC. The musical will be touring in Seattle, Salt Lake City, Denver, Los Angeles and more.

On the small screen, Christine currently can be seen in the sophomore season of Netflix’s hit Marvel series “Iron Fist” in which she plays the role of “Sherry Yang,” the wife of Hai-Qing Yang, leader of Yangsi Gonshi – also known as the Hatchets. Iron Fist is currently available to view on Netflix.

Name one your strengths.

Best advice ever given.

When you were a kid, what did you want to be when you grew up?

An actor in Broadway musicals and television shows.

Who has been the biggest influence on your life so far?

My parents and my husband. My parents gave me every opportunity I needed to pursue my dreams, and show me every day what it is to overcome any and every obstacle. My husband has taught me to dream bigger than I ever think is possible.

What did you learn from your biggest failure? (If any)

To embrace the knowledge gained from the mistakes made, forgive myself and move forward.

Being my best self and living up to my fullest potential while showing the people I love how much I love them in all the best ways possible.

Tell us about Netflix’s hit Marvel series “Iron Fist,” and your role as Sherry Yang?

“Iron Fist” tells the story of Danny Rand and Colleen Wing and the various ways they try to use their powers for good. In Season 2, I played Sherry Yang, fierce community leader and (eventual) head of the Hatchet Triad. I loved getting to play this powerful, elegant and complicated woman, and have such respect for everyone who worked so hard to make the show great! I’m very sad and disappointed that there won’t be a Season 3, but I (not so) secretly hope that Sherry Yang pops up somewhere else in the Marvel Universe. Hey, you never know! (See above in the *dream bigger category).

Tell us about Lifetime’s drama series “You?”

Based on Caroline Kepnes’ best selling novel of the same name, it’s a fascinating series about the lengths people will go to connect with one another. I had a blast working with the team there and think the show is so well done! I look forward to seeing how the story continues in Season 2.

Written by husband and wife team Irene Sankoff and David Hein and directed by Christopher Ashley, COME FROM AWAY is based on true stories that occurred in Gander, Newfoundland when the American airspace was closed on 9/11 and the people of Gander (and the surrounding towns) opened their hearts and homes to the 7,000 strangers who were stranded there. I’m currently on tour across North America with this beautiful show (which is still playing to sold out crowds on Broadway) and love how it illuminates the healing power of kindness and compassion. Such an important story to spread, especially these days! I play “Diane”, a Texan woman who falls in love with a British guy that she meets in Gander – based on the real life Diane (and Nick) Marson’s story. We had the great joy of getting to meet them – and so many of the Ganderites and “Plane People” whose stories are included in the play. They couldn’t be more delightful, wonderful and generous people! I feel so incredibly lucky to be a part of the COME FROM AWAY extended family!

Do you prefer doing a musical or acting behind the cameras?

I truly love both. The unique and ephemeral moments of a live performance are exhilarating. But so is on-camera storytelling, which is so up close, every breath conveys a different thought.

What is the biggest highlight of your career so far?

Though I have had many amazing experiences throughout my career, this year has truly included two of my biggest, most exciting highlights! Working on “Iron Fist” and being part of the Marvel Universe – and sharing the story of COME FROM AWAY with this company across the country are both dream jobs come true.

There are so many! Michelle Obama, Antoni Gaudi, Oscar Hammerstein II come to mind immediately. All three are inspirational in different ways but I’m especially drawn to their perseverance, genius, and lasting impact on society and/or the arts.

I consider myself a sort of “paleo foodie” – so there’s a lot that I love! I’m a little obsessed right now with the almond flour-potato-based pastas made by Cappellos, tossed with some roast chicken, zucchini, sea salt and avocado oil.

Having a play or musical that I’ve written be produced on Broadway or Off-Broadway. My musical TILL SOON, ANNE (for which I wrote book and lyrics with composer Bobby Cronin) is in the forefront of my mind! I also wrote a play called THE SECRET WISDOM OF TREES for actress Lynn Cohen (“The Hunger Games”) and a play called GUILTY UNTIL PROVEN INNOCENT for my best friend, Reggie Lee (NBC’s “Grimm” and more – see below!) that I really would love to see on the stage in NYC or LA!

At the top of my list is my (aforementioned) best friend, Reggie Lee, one of the stars of the NBC series Grimm (and so many other great shows/films). I’ve seen him work his tail off for over 20 years, while also advocating for other Asian American actors, being steadfastly dedicated to his craft, and throughout it all – always unfailingly kind. Plus he’s an amazing foodie buddy!

I’d love to go to Tuscany and the Amalfi Coast with my husband Bruce.

I’m a real musical theatre nerd, and go especially crazy for anything by Rodgers and Hammerstein and Stephen Sondheim. But also – my other musical tastes are pretty eclectic: Seal, Debussy, Sara Bareilles, Fauré…

Yes. Broadway Cares/Equity Fights AIDS has been a charitable organization I’ve been actively supporting for years. They provide relief for people living with AIDS/HIV and other debilitating diseases, as well as giving grants to provide hurricane relief, help in food banks, the Phyllis Newman Women’s Health Initiative and most recently to aid first responders and animal rescue groups effected in the November Los Angeles fires.

Waking up slowly and cooking a great breakfast at home with my husband Bruce and our Westie, Joey, taking a walk along the water, maybe a little shopping or reading and an afternoon nap, then a relaxed, delicious dinner with hubby and friends at a favorite restaurant. (I also really love my job, so I would probably also throw in getting to do a matinee of a Broadway show.)

It can be such a wonderful connector, but also can be a terrible divider. I hope to always post responsibly, asking myself “is it true? Is it kind? Is it necessary?” before I put anything out there.

Quote: “I dwell in Possibility”

Favorite song? Why? Music is such a huge part of my life, it would be hard to pick just one – but I do love a song by Stephen Sondheim called “Move on” from SUNDAY IN THE PARK WITH GEORGE. This lyric particularly resounds with me: “Anything you do, let it come from you, then it will be new.” Such an anthem/call to action for artists who want to keep being their best creative selves without judgement!

Sports Team: I have a soft spot in my heart for the New York Mets, being a native New Yorker — but also because when I was a child, our family lived next door to a pitcher from the team and we got to go to a lot of great games.

Movie: “The Sound of Music” (I told you I was a musical theatre nerd!) I also love “White Christmas”.