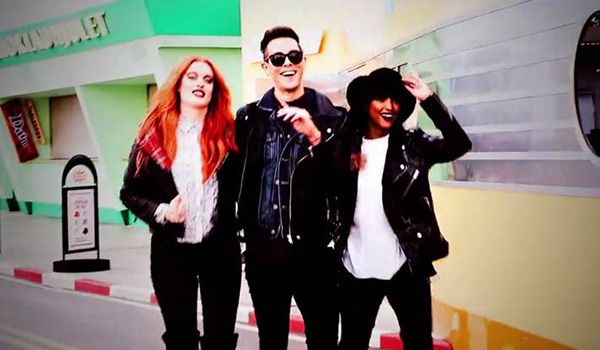 COBRA STARSHIP TEAMS UP WITH ICONA POP AND DIRECTOR/PHOTOGRAPHER ELLEN VON UNWERTH FOR OFFICIAL “NEVER BEEN IN LOVE” VIDEO, OUT NOW!

WATCH “NEVER BEEN IN LOVE” HERE!

“NEVER BEEN IN LOVE” CURRENTLY CLIMBING AT POP RADIO Last month, Cobra Starship’s Gabe Saporta visited Sweden for the first time in order to meet up with his “Never Been In Love” collaborators, Icona Pop. Joining him on the voyage was renowned fashion photographer and director Ellen von Unwerth, who documented the artists’ first joint performance and captured their random nights throughout Sweden.

“Never Been In Love” was heavily influenced by the pop sound of early 90’s UK artists like Jesus Jones, EMF  and George Michael. With the help of Wallpaper.  and a sample of Fatboy Slim’s “Praise You,” Cobra Starship created “Never Been In Love,” the DCD2/Fueled By Ramen band’s first single since 2011’s Night Shades.

Unlike the name implies, “Never Been In Love” is actually a positive and carefree song. Idolator called it, “…a punchy party anthem, full of infectious piano melodies, hand clap, na-na-na’s aplenty and a soaring hook of a chorus.”

To capture the song’s feeling in a video, Cobra Starship turned to renowned photographer and director, Ellen von Unwerth to create a documentary style video showing Cobra Starship finishing the song at home in New York City and following Gabe Saporta on his first visit to Sweden to hangout and perform “Never Been In Love” with Icona Pop for the first time. Ellen von Unwerth is known worldwide for her fashion editorial photographs and has previously worked with musicians like Duran Duran, Britney Spears, Christina Aguilera, Janet Jackson and Rihanna.

The video premiered this week on MTV and can be seen here.

For more on Cobra Starship, visit: