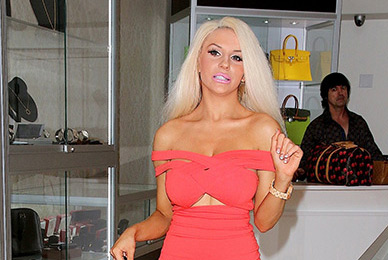 At LXR & Co., located in Beverly Hills, you can find the vintage bag of your dreams. Known for their discounted luxury vintage products, LXR & Co. has a wide selection of designer purses to choose from. On March 14th, Courtney Stodden was spotted out and about shopping at LXR & Co. hoping to find her perfect handbag. Stodden, most known for her controversial marriage with Doug Hutchinson, is an American television personality, model, and singer. Stodden has appeared on VH1’s “Couples Therapy,” as well as the British version of “Celebrity Big Brother.” She has many songs on YouTube, including “Don’t Put It On Me,” which has accumulated over 6,500,000 views. Newly single Stodden seems happy shopping around Brighton Way in Beverly Hills. At the young age of 19, Stodden seems to want what every girl ultimately wants: to have a great shopping day and hopefully leave happy with a new Balenciaga or Fendi purse.

Kathy Griffin & Chef Robert Irvine, Plus Huge Giveaway on The...