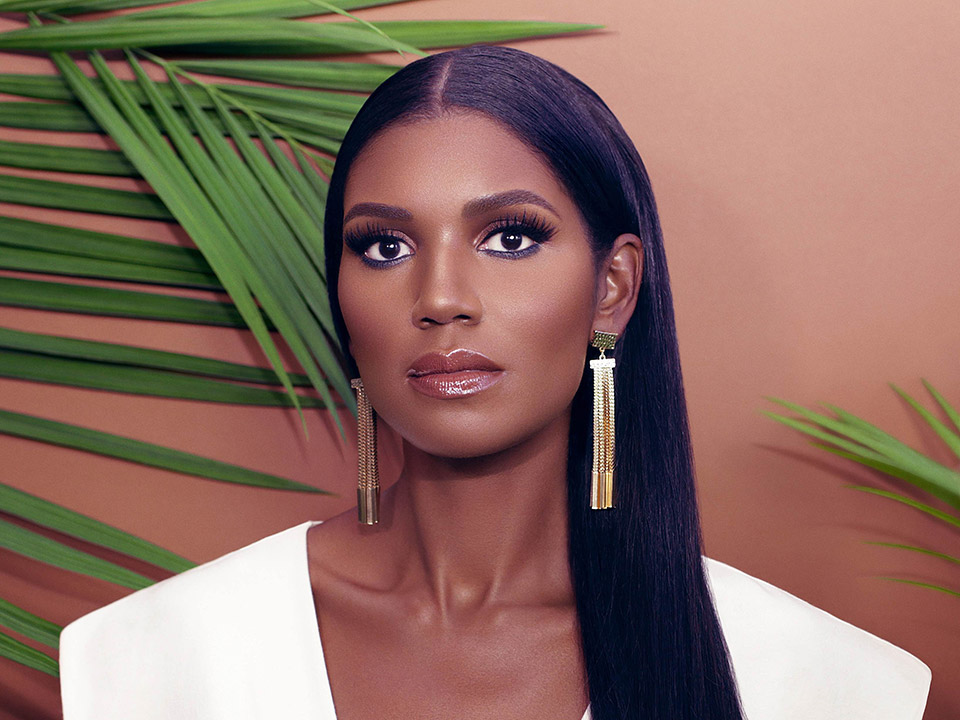 Interview with talented actress Denise Boutte, who can be seen on “The Bounce Back”, which is in theaters now.

Denise is best known for her role as Sasha Brown on the hit Tyler Perry series Meet The Browns, which is now airing in syndication on BET. She re-teamed with Perry for her role as Trina in Why Did I Get Married alongside Janet Jackson, Jill Scott, Malik Yoba, and a star-studded cast.

Hi Denise, please tell us a little about you?

Well hello there Naluda! I would say, “California Dreamin’ with Louisiana Roots,” about sums it up!

So, how did it all begin?

Well, while working in the Dallas, TX world of advertising, overseeing commercial and photo shoots for a range of clients’ campaigns, I was introduced to life on set and on several occasions, and finally was asked to step in front of the camera. My initial resistance didn’t last long and after being approached by a local talent agent, I found myself in front of the lens for a variety of print and commercial campaigns. A chance introduction landed me a talent manager (who I’m still with, til this day) in Hollywood and shortly after, I decided to take a leap of faith, packed my bags and headed West.

I call Tyler my “Brother from another Mother,” does that count?

Trust, no one is more surprised by my career choice than me. I mean, I started out as a Pre-Med major at LSU! I believe I was inspired by the artistry of acting and have loved it ever since my first role.

I’m a “cross every T, dot every I” kind of chick so being able to free-fall into character is one of the most liberating feelings, ever! There is absolutely nothing like it.

What roles do you like to play, and why?

I recently wrapped a romantic comedy in DC, called “Couples Night” (shout out to Reagan Gomez-Preston, Malik Whitfield, Tony Rock and Tri-Destined) and was reminded how much I love and miss comedy! Prior to that, my roster has been filled with a slew of “bad girls,” which can be quite fun because you get to vicariously live life on the wild side, without the repercussions.

In my book, you can’t beat Denzel. He is one of the most extraordinary artists, ever! On the actress front, I’ll have to go with Diahann Carroll for nostalgic purposes. As a kid, no one was more regal than Dominique Deveraux.

What is the best advice you’ve ever gotten?

I’ve gotten so much amazing advice, as I’ve been blessed with a beautiful village of people. At the moment, I’d have to go with, “When someone shows you who they are, believe them the first time.”

Can you tell us about your film and your role in The Bounce Back that is hitting theaters December 9th?

To say that it was a fun set, would certainly be an understatement! I portray Matthew Taylor’s (Shemar Moore’s) ex-wife, Julie. Something ironic about the script is that my character leaves his. First-read of the script, I was like, “so did the girl not like 6-packs, or what?”

Now tell us your time on “Meet The Browns” and your role as Sasha? How did you land the role?

Meet The Browns was truly an amazing experience. We became a family. We began the series a few years after my move to California, so it was also a safe place for me to learn and grow. I booked the role by simply walking into an audition. The next day during call-back, Tyler Perry himself shook my hand and offered me the role. Just thinking about that moment still makes me smile.

Tell us about “Why Did I Get Married?”

The opportunity was so amazing! How would you feel, just starting out in the biz, walking onto a star-studded set that includes Tyler Perry, Jill Scott and can you say Janet Jackson? Pinch me, please! Til this day, Sharon Leal is one of the finest, most underrated actresses I’ve ever had the pleasure of meeting/working alongside.

How is it working with Tyler Perry?

Truly an honor. He is one of the most beautiful people I’ve ever met.

What is your favorite healthy meal?

My newest addiction is savory sweet potatoes. My PawPaw (what we Louisiana folks often call our grand fathers) had folks coming from miles around, because he was known for growing the best sweet potatoes in the South. I’m not sure if it was because I’d help with the planting/harvest, but at the time I couldn’t stand them! Now, thanks to my cousin Chan’s savory spin, I’m In love.

What is your favorite cheat food?

What are three things you can’t leave home without?

My cell phone, a bottle of H20, and my calendar. Yes, I’m talking about the old-school, hard-copy calendar.

Any other exciting news you want to share with us?

Yaaaaas hunty (in my Wendy Williams voice!) Don’t miss Radio One Founder and Chair, Cathy Hughes’s Media coming at you February 2017 on TV-One! I am so honored to be a part of this star-studded cast, there are too many folks to name, but I have no choice than to mention Brian White, who effortlessly portrays my husband, Michael Jones. In a nutshell, it focuses on the Jones family, who owns and operates JUMP, Jones Universal Media Productions. Between affairs, conspiracies, backdoor deals, fierce rivalries, mix in a little murder, you’ve got the perfect recipe for drama. Also be on the lookout for the films Secrets and Couples Night hitting theaters in 2017!

Well, diversity is key. In addition to producing my own film and television concepts, I’m in the thick of creating a cooking empire! From pecan praline gift-sets, to cookbooks, to heat-&-eat sides, desserts and seafood…it’s all on deck baby!

I enjoy a variety, but nothing tops my love for neo-soul. I’m currently loving “Permission” by Ro James and Solange’s new album “A Seat at the Table.” She really did an amazing job!

A very coordinated, carefully prioritized juggling act of family and career. No different than most.

Your soon-to-be favorite, my cookbook, “Cook’in in California with Louisiana Roots”.

It’s a toss between Jill Scott and Erykah Badu!

The nostalgia of The Wizard of Oz will never be replaced.

At the moment, I’m really enjoying a Moscow Mule, with a twist of Pomegranate. So refreshing!

Shout out to Issa Rae for Insecure. The show is so unexpected and laugh-out-loud funny!

I really need another visit to Paris in order to eat my way through the city. Next up would be a remote island. Any suggestions?