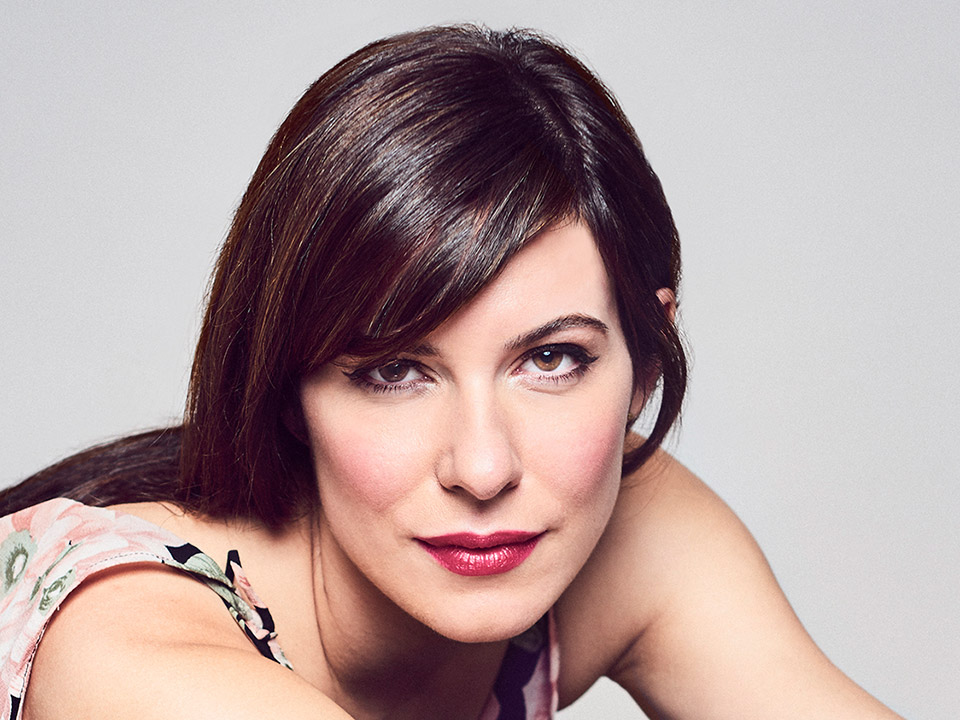 Our interview with gorgeous Scottish actress Gemma Forbes who can be seen opposite Odette Annable and Fran Kranz in the award-winning independent comedy, “The Truth About Lies,” directed by Phil Allocco.

The Truth About Lies is out on October 27th.

Hi Gemma please, tell us a little about you?

I’m a Scottish lass from the Highlands living in NYC

My parents & my husband

I can’t say there is any defining moment. I didn’t come from a theatrical family and grew up in the Highlands of Scotland where there isn’t exactly an abundance of actors. I’m not sure what possessed me to take such a path to be totally honest. When I left high school, I began exploring and took a college course in acting & performance and then it was a gradual progression from there, taking classes and getting experience. It wasn’t until a few years later that I made the decision that this was something I was going to be totally committed to and pursue.

I think it was in the school pantomime when I was about 7, I was a dolphin. My mum made me the most spectacular costume!
She also claims, “it was the best bloody costume in the whole place!”

Best part is – When you’re given the opportunity to perform and bring a character to life. Everything from the creation of that to the performance itself brings me so much joy and purpose. Worst part – everything from not knowing if you will ever book another job to bombing at an audition. To be honest there are a quite lot of negatives. Sometimes I do laugh at the torture I put myself through!

Best advice EVER? Yikes! I’ve had some very good advice although I think I wasn’t always wise enough to take a lot of it. Some good advice when I was very young was to travel and I did. I went on a high school exchange when I was 16 and that was the beginning of my escapades…there are still so many places I’d like to visit. I think it’s a good thing though- to travel. You learn a lot about yourself, the world and people.

Tell us about “The Truth About Lies”?

The Truth About Lies is a comedy that tells the story
about a guy who finds out he is more honest when he’s lying. There’s a host of fun characters and actually they are all lying either to themselves or to each other. I play Ann who does both.

What was your most memorable experience from the set so far?

The sweat lodge scene in The Truth About Lies was pretty memorable. It was winter and absolutely freezing while we were shooting in upstate New York in a little tent which was our sweat lodge. There was heat & smoke being pumped in for the scene and we were also getting sprayed with something that would look like sweat. By the end of it we were all becoming delirious!

And now about the comedy Middle School: The Worst Years of My Life?

Middle School is a fun family comedy adapted from James Paterson’s children’s book. It’s a story about a rebellious boy named ‘Rafe’ who uses his drawing to express himself during his troubled time in middle school. I play a waitress in a scene with Rob Riggle who is hilarious! His character is hitting on me while he is taking his girlfriends’ kids out to lunch. My character also becomes an animated cartoon too which was fun to see.

I worked with the Living Theatre when I first came to NYC. The Living Theatre, is one of the oldest experimental theatre companies in the US with a rich and colorful history. It was particularly pioneering in the 60’s. Anyway, I had just arrived in NYC and was invited to be part of a play directed by Judith Malina, one of the founders. It was really an amazing experience and very different to anything I had ever done. Judith was in her 90’s at the time and would be there at every rehearsal. Her passion and dedication to her art was pretty incredible. I learned a lot there and have some good memories. I remember one day we were rehearsing on the roof of the theatre, there were about 20 of us and our vocal director Shelia who was amazing kept telling us ‘it’s not loud enough, project, project!’ and she still wasn’t getting the results from us. She had us all stop and was like ‘grab your hoo ha and sing it from there, loud and proud!’. She got the results she wanted, like I said, they were experimental!

I’m really bad at answering favorite anything questions. There are so many actors that I love for different reasons, so to pin it down to one is tricky. I think Tilda Swinton is a wonderful actor, no bias because she’s from my neck of the woods. I think she’s a really interesting and a very intelligent person. She seems to have this amazing imagination and I think that’s why she is so compelling to watch. I love how diverse she is in playing widely varied roles…so unique and no one else is quite like her.

I saw Oscar Issac in Hamlet at the Public this summer and was blown away. I love watching him perform, he is a very gifted actor and Ive been a fan of his since “Inside Lewyn Davis”.

Brushing my teeth, nice undies, and my tinted lip balm.

Depends on my mood. Right now, I am really loving Father John Misty, he’s an impressive guy. I have the “Pure Comedy” record and I will play it over and over again and finding new stuff about it I love. The song “Leaving LA” is just beautiful.

Totally chilled. I’d be with my family and some close friends having a BBQ or a picnic, eating drinking and playing games, I love a good game! We always play games at Christmas in my family. The cornflakes game is a favorite! So just like that, but in a summer setting would be perfect!

Every day is always very different for me, depends on whether I am working on something or if I have an audition. Recently I have been waking up early and doing morning pages for half an hour before I get on with the rest of my day. I like to get all the BS out of the way, it allows you up to focus on what’s important. I also try to do yoga, maybe not every day, but a good few times a week.

I actually like most healthy foods! Give me a bowl of greens any day!

Mac n Cheese is my weakness

Hopefully employed! I really have no idea. In many ways, probably not that different from my life now. I just hope my career is a bit more sustainable.

I try and do my bit! I’m a supporter of Amnesty International and the work that they do – I donate when I can. Thank goodness for organizations like these! I also volunteer for Book Pals, a program through SAG/AFTRA that promotes literacy in schools. This entails story telling sessions in schools! The classes I read to are Pre-K and such a delight. it’s a beautiful thing to witness the transformational effect of a story.

Holiday Destination: I love the South of France and Thailand has been on top of my list for a while too, I really want to go there.

Restaurant: I love Cafe Mogador in NYC, it’s down the road from where I live. Can’t beat a good brunch there.

Celebrity Crush: I’m always crushing over someone, maybe Tom Hardy this week. I had a crush on Sir Jorah from Game of Thrones for a while – this was pre-grey scale.

Song: Oh gosh, it’s hard to define a single song! There are so many that touch you for different reasons. Anything sung by Freddy Mercury though – epic! Reminds me of my childhood and good times! It just makes me want to sing along and dance every time!

Sports Team: I don’t really have any. It’s funny because I love playing sports! It just bores me to watch them on TV!