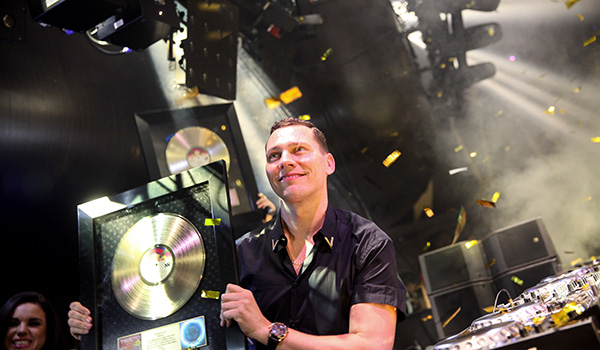 This past weekend (Friday, Sept. 12) Hakkasan Las Vegas resident DJ Tiësto took over the nightlife complex for a special Gold Party edition of his “Club Life” affair as he celebrated not one but two of his 2014 singles going Gold as certified by the RIAA. The two singles, “Wasted” featuring Matthew Koma and “Red Lights” have both reached over 500,000 digital sales making this Tiësto’s first Gold plaques in the US. The turntable sensation transformed the fourth level of the destination into the ultimate celebration as thousands of electronic music fans and partygoers alike flocked to the hot spot. Taking the stage around 1 a.m., Tiësto began his heart-pumping set while the energy of the main room erupted with excitement. Kicking the celebration into full party mode the DJ icon was surrounded by Hakkasan’s stunning model cocktail servers as he was presented with two commemorative gold plaques by representatives of Casablanca Records. As gold confetti burst into the air, Tiësto held his trophy high above his head for all of his fans to see and cheers took over the hot spot. Adding to the excitement, fellow DJ and Hakkasan featured artist Afrojack made a surprise appearance in the DJ booth to celebrate with his good friend. It was truly a night to remember as Tiësto spun his hits into the early hours of the morning and closed down the party around 4 a.m.