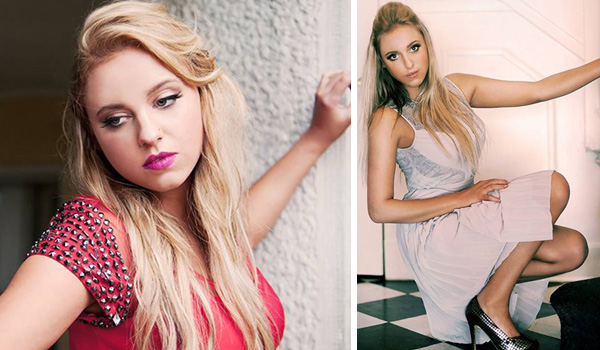 Emmy Bachmann is a Pop/Alternative artist from Nashville, Tennessee. She recently released her debut EP, Stranger, along with her first official music video for the single in July 2014!. It was in her small town where she taught herself how to play acoustic guitar at age fifteen and piano at age five. Emmy said that each one of her songs tells a different part of her story. They are honest, personal and versatile similar to the music styles of Adele, Alanis Morissette and Lana Del Rey. The album itself was inspired by the lessons she learned and the strength she have found over the past few years. When did you first start singing?

I’ve been singing all of my life. It started with church choirs and led to teaching myself various instruments and writing my own songs. I’ve always been involved in music in one way or another but I started taking steps to make a living out of it when I was about 16.

My dad played a little guitar when he was younger so he would make up funny songs and sing me to sleep. My mom cant carry a tune but she would sing to me anyway. My parents taught me to find joy in music. My little sister, Hannah and I would write musicals and perform them together. She has an amazing voice for broadway and she still writes songs as a hobby.

Who are your musical inspirations?

I love the emotion and authenticity of Adele and Lana Del Rey’s music. A lot of my inspiration comes from undiscovered artists from different countries and even different genres.

What kind of music do you listen to today?

I listen to a broad range of music. My favorite type right now is probably alternative and singer-songwriter although I have been listening to more country music since I moved to Nashville. What I listen to depends on my mood. Too many to list. I’ve got everything on my iPod from 80’s pop songs to Hannah Montana. My sister is obsessed with spanish soap operas so she downloaded some spanish love songs on there. I can’t understand the words but they’re pretty catchy.

What was the title of your first song? What do you think of that song now?

I wrote a song called “pond” about a pond behind my church when I was little. I don’t know if it counts but I still remember it word for word. It was terrible but I was only eight years old. “Fairytales” was my first real song I recorded in a studio when I was fifteen.

I’m recording another album and music video in the next few months. Hopefully, in 2015 I’ll get to travel and perform more.

What genre of music can’t you stand to listen to?

Lyrics are very important to me so I can’t stand songs that are either too repetitive or ones where you can’t understand what the artist is saying such as in some heavy metal music.

What would you be doing if you weren’t making music?

I can’t even imagine my life without music. I make music to help and relate to people so I would probably be pursuing a career in nursing or psychology but I truly believe that the best way I can help others is through the songs I write.

I was pursuing acting before I decided to solely focus on music. I’d love to get back into it in the future. I also love writing. I’ve been writing a book for the past year. I don’t know if I’ll ever try to get it published. It’s just a hobby for now.

It’s kind of embarrassing, but I’m really good at Mario Kart. I can play it with my toes. I can also juggle and I used to be a gymnast so I can do backflips. Maybe I was in the circus in another life.

What else can we expect from you in the future?

You can expect a little more edge to my music. I’ve been writing more uptempo songs with abstract thoughts and “supernatural” themes.

It’s hard being a new artist, especially these days. What are the keys to getting noticed?

I feel like people like originality. Its important to find different ways to say a common thought or idea in a song. It’s also important to be vulnerable and honest because that is what makes music relatable.

Its a necessary tool for music promotion and it significantly broadens my fan base.

I met a women at a talent convention years ago who told me “protection not rejection.” It’s stuck with me ever since. It’s helped me not to be discouraged when things don’t work out the way I expect because it means something better is planned for me. This advice has helped me in all areas of my life, not just music. Food: Apples
Book: “The Giver” by Lois Lowry. It’s one of those books you can read over and over at different points in life and always get something new out of it.
Quote: “not all those who wander are lost”

Make sure you go to iTunes and purchase her EP Stranger.