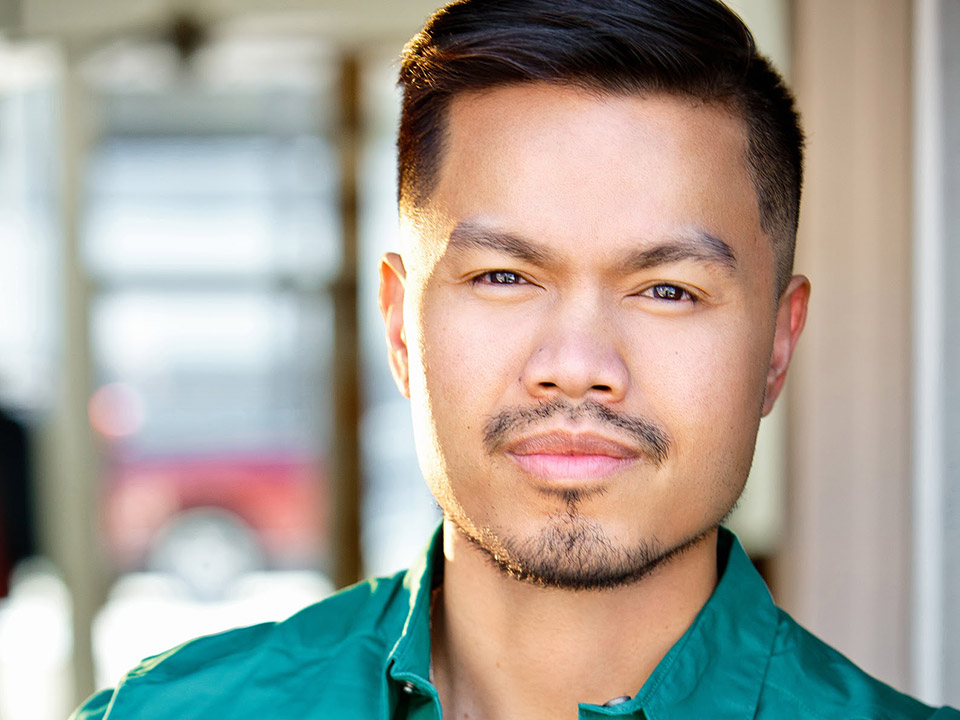 Check our interview with actor, producer and writer Mark Labella who is an alumni of the famous Second City, Chicago. A doctor, turned actor, he is best known for his roles on NCIS Los Angeles, Chicago Fire and Date Night Chicago.

My name is Mark Labella. SAG/AFTRA actor – writer -producer. I was born in Cebu, Philippines and raised in San Diego, CA. I’m a very hospital corpsman of the US Navy. Though I graduated with a degree in medicine, saved some lives along the way, the calling to be a story teller has never escaped me.

I love to write and acting is one of the most exciting parts of storytelling because you get to truly live in the world of the story that you’re telling.

Work ethic. I apply as much self-drive and gusto to a project as I did with any other job I have ever done. Whether it was the military, med school, or an acting gig, I put my heart and soul in to my work.

I get up early every morning. I love the mornings and I have to start it right. I usually work out and I write. An actor’s life is filled with unpredictability so my whole schedule revolves around that. I just wrapped a project that I had the privilege to write and produced and that was taking a lot of my time. UNCONDITIONAL is the title of the new project. It’s one that is very near and dear to my heart. The entire cast and crew put their heart and soul into the project so I’ve been working hard to make sure we have something that we can ALL be proud of.

My mom is the best human being I have ever known. My friends and family are everything to me. Without the people that have helped me and supported me through all this, I would be nowhere.

I was in Chicago taking my USMLE board exam review at Kaplan University and all of my items were stolen out of my gym locker. A roommate of mine suggested that I do some background work for the tv shows filming in Chicago. They gave me lines on day one on my very first scene in Chicago Fire and I was hooked ever since. One thing that made me stick with acting was breaking up with my then girlfriend. She was at the review course with me and acting helped me out of a rut. She continued on the medicine route while I diverged to a path that’s always been in my blood.

I found out later that my grandfather, who passed before I could meet him, was one of the pioneering directors of Cebu film making. My uncle is an award winning writer in Philippines so there’s a whole crop of storytellers in my family.

I remember being the lead in my middle school musical called “A Technicolor Promise”. It was about Noah’s Arc and I played Noah. That’s when I knew acting was in my bones. When I was young, I wanted to try every sport, every academic competition, and every single activity my school offered. I tried it all from yearbook to newspaper to basketball to volleyball. I’m an only child so school activities kept me from staying home and alone. My very first audition for my very first play was a lead role! I was lucky to have gotten that part. I’d like to say that acting was innate, but it’s not. It was a lot of hard work. I think I got that “gig” because everyone else that auditioned was tone deaf. I had the opportunity to learn how to sing through the numerous karaoke parties my family held when I was growing up. It’s a Filipino thing.

I’m still taking acting classes to this day. It’s an attitude I wish I had when I started. I was lucky enough to have booked a principal role after my very second professional audition. My first one, as expected was an utter disaster- so on my second audition, I said, “F*** IT. I’m gonna go in there and kill it.” I down two sugar free red bulls and killed that audition. With no training and no experience, I booked my first principal role and it was a SAG/AFTRA project!

Nevertheless, I was so green to acting that I had absolutely no idea what I was doing. I showed up on set having no idea what to do. The other actors were acting circles around me. I was so inspired to be on their level that I signed myself up to Second City right after the project wrapped. I studied acting and improv at second city then moved on to other acting schools. I must recommend training for anyone and everyone who want to act. You will burn bridges if you show up unprepared and untrained to a casting director. They won’t want you to waste their time again.

Unpredictability. You never know when work will come so you have to keep on pushing. I am a male Asian actor. There aren’t a lot of roles for me. I work my butt off and I have to count my blessings because there are actors out there with a two year droughts.

Still, I love to tell stories. Being an actor is the best part of being a storyteller because you get to live in that story and actualize the life of that character m.

Because there aren’t a lot of roles for “my type”, I write! Being storyteller is my passion so I write almost daily especially with stories that inspire me. If I’m lucky, I get to act in it like UNCONDITIONAL (my latest project).

Best advice about acting- Don’t become an actor to get famous.

I internalize the heart of the character first and foremost. The best part about being an actor is being able to live in someone else’s skin. I get to give my heart and soul to the character. It’s an incredible feeling.

It’s fast paced. Network shows will destroy you if you don’t keep up. You have to show up to set knowing your lines so that you don’t mess up the production. Professionalism is everything.

I’ve done quite a number of commercials. The latest one was the superbowl commercial with John Legend and Adam Levine. It was an incredible experience. I got to sing with John Legend. That’s actually my voice amongst others. John Legend is one of the most humble human beings in this world. He is a true hero.

Give me anything that Jon M. Chu is directing! He has put modern Asian culture on the map. I want to play roles with a lot of heart. I’m an average Asian male with average looks, but I have a lot of heart. I’d like to offer that to any and all projects I’m attached to.

As I mentioned, UNCONDITIONAL (directed by George F. Gutierrez) is one to look out for. I think we may have the start of something GREAT with this project. I am incredibly excited to tell the world about the heart of this Filipino Man. I’m still glowing about it even after we’ve wrapped.

I love Ken Jeong obviously because, like me, he has a medical background. My favorite actors and actresses are the ones who remain humble even after all their successes. You hear of people like Keanu Reeves who come with no air of arrogance when it comes to the people they work with. Those are the actors and actresses I favor.

I love hip hop and R&B. I’ve got to be honest here, I am a fan of anything and everything that I can sing Karaoke to.

Many of my acting friends don’t know that I have a doctorate in medicine. Best thing I’ve ever done in my life was to deliver babies in the middle of an earthquake.

Many of my doctor friends don’t know – that I have loved to act and write since I was a kid. Acting or writing isn’t some whim. It’s what I love. It’s what I’ve always loved.

I also want to tell them that it’s also possible to love both medicine and artistry. I love being creative, but I also love the sciences. I’ve made peace with myself on what I’m prioritizing right now. I hope they can too.

Corazon Aquino. I want to know what it was like to be the first female president in Asia. We’re talking about a female president of a highly patriarchal country at a time of incredible turmoil. She succeeded a dictatorship. I am encouraged by strong women. I was raised by one.

Everything from Anime to GOT to Star Trek. I love TV! I’ve been into binging lately but my all time favorite show is LOST.

Poke. I was in the USN stationed in Pearl Harbor, Hawaii. POKE is raw fish and it’s tasty yet on the healthy side.

Flamin’ Hot Cheetos. I could have this for breakfast every morning if it wasn’t so bad for me.

I actually volunteer once or twice a week at MPTF (The Motion Picture & Television Fund) campus on Mulholland Drive where I get to work with a lot of industry veterans and retirees. It’s helping people live and age well with dignity and purpose. Being able to hear their stories makes me feel a strong connection with the rich history of this business we call Hollywood. I get to be a part of that!

Quote: Success is no accident. It’s humility and hardwork. It’s studying and sacrifice. Most importantly, it’s loving what you do.

Holiday Destination: My favorite place in the world is Seoul. But I’d really like to go to Europe. I have some doctor friends that I did externships with from the University of Oxford. I’d like to visit them.