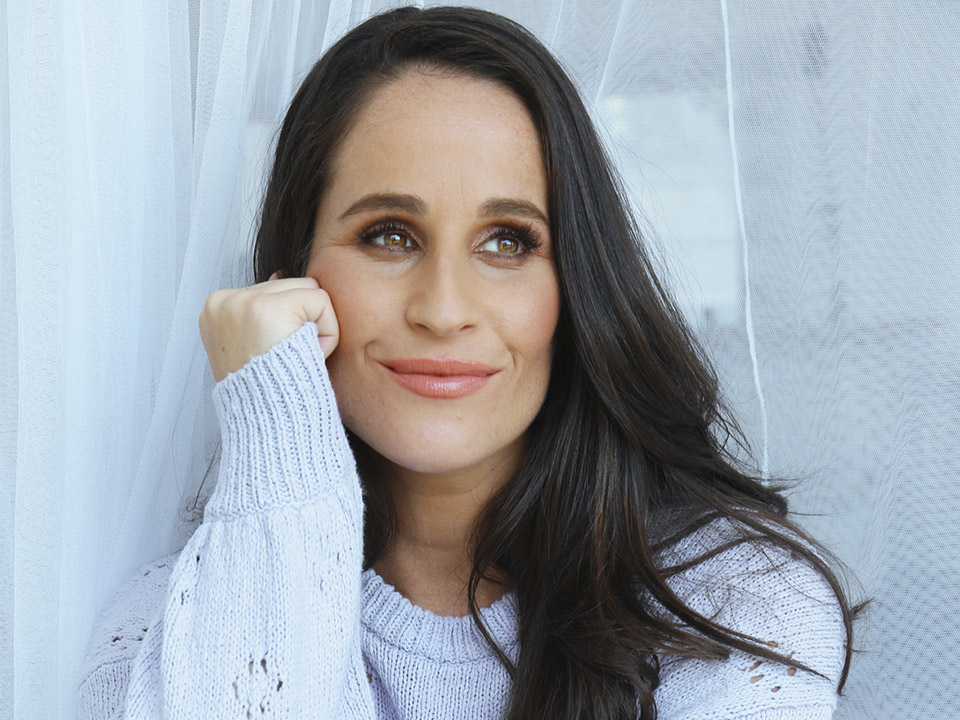 Davis is set to star in the upcoming Warner Bros film Motherless Brooklyn alongside an all-star cast including Edward Norton, Bruce Willis, Alec Baldwin, and Leslie Mann. The film is set in 1950’s New York City and Davis’ character plays a “fresh off the boat” young Irish girl. She works the front desk at an office where Edward Norton’s character encounters her on his journey to solve the mystery. The film is set to be released in theaters November 1st.

Outside of her work on the big screen, Davis also played the lead role and fan favorite, Valkyrian Prime, in the CollegeHumor series Troopers, the ultimate Star Wars parody series that gained a cult following. Davis’ character is known as a force of raw evil known as “The Mistress of Management” and “The Iron Consultant” being confident, deadly and ruthless. 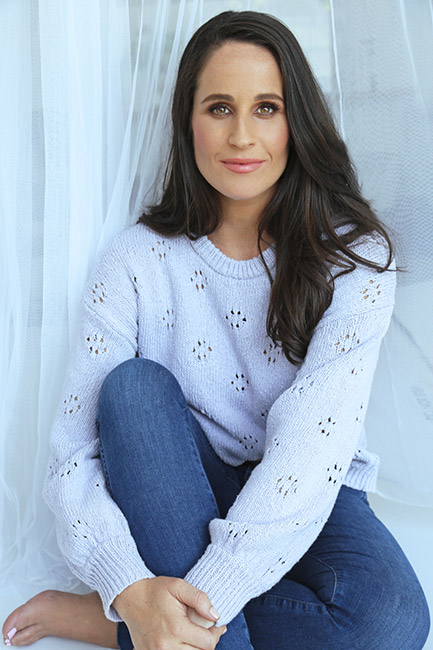 Hi Katy, please tell us a little about you?

I was in born in Dublin, the capital of Ireland and have only ever lived there or in LA. I’m married to a freelance tv producer with one son who’s 2 and I’m expecting my next baby in late February next year!

My ability to make tough decisions for myself without worrying what other people think. I moved to the other side of the world (Dublin to LA) without knowing a single person and didn’t care what anyone had to say to try and stop me!

Oooof how long is a piece of string?!? If I’m in full Mum mode then it’s toddler breakfast followed by a toddler class like music or My Gym. Nap time (the best time!) then maybe a walk, errands or swimming in the pool. Then it’s toddler dinner time, bath and bed. If I have an audition or script to work on I’ll usually take a couple of hours during my sons 3 hour nap to tackle that and if I’m on set then it’s like a paid holiday in comparison!

My husband Phil. I’d be lost without him. We’re true partners in every sense of the word.

When I was 12 I started taking speech & drama classes at The Betty Ann Norton Theatre School that also acted as a children’s agency in Dublin. They got me my first audition (which I booked!) and the rest is history!

The role of “Aileen” in the Irish children’s film “My Friend Joe” opposite Schuyler Fisk and Joel Grey.

Oh yes! I’m a graduate of The Gaiety School of Acting Full Time Professional Programme in Dublin and whenever I feel myself getting a little rusty or scared I jump straight back in! Currently I’m taking class at Lesly Kahn in Hollywood.

The best part for me is the actual work on set or stage. Most times it doesn’t feel like a job it just feels like fun.

The worst part is the uncertainty and not knowing what might be next.

Hmmmm does anyone do that?!? Seriuosly?!? When I’m crushing my career I’m missing my son and when I’m all in on the Mum game I feel guilty for neglecting my career. I think since having my son I’ve come to the realisation that I absolutely can do everything just not at the same time and there’s no shame in that.

It really depends on the role. The main preparation I did for my role in “Motherless Brooklyn” was to read the original novel of the same name that Edward Norton adapted the film from. Written by Jonathan Lethem it’s a wonderful read that kept me guessing and turning the pages right to the very end. The only difference being that the book is set in contemporary times whilst Edward chose to re-set the drama in the 1950s – a time of great change in New York City.

Now tell us about your work in upcoming Warner Bros film “Motherless Brooklyn?”

Welllll I can’t give too much away as the entire plot of the film is one long who dunnit. Set against the backdrop of 1950’s New York I play a “fresh off the boat” young Irish girl. She works the front desk at an office where Lionel (Edward Norton’s character) encounters her on his journey to solve the mystery…

How was working with such a talented cast like Edward Norton, Bruce Willis, Alec Baldwin and Leslie Mann?

I only worked opposite Edward Norton but it was incredible. He’s a fiercely talented and generous actor as well as director, writer, producer and screenwriter (he wears all those hats on this particular film). There was room for some improv within the written scene and the whole experience felt very collaborative. My wardrobe, hair and makeup were also so much fun as they stayed true to the classic noir style. 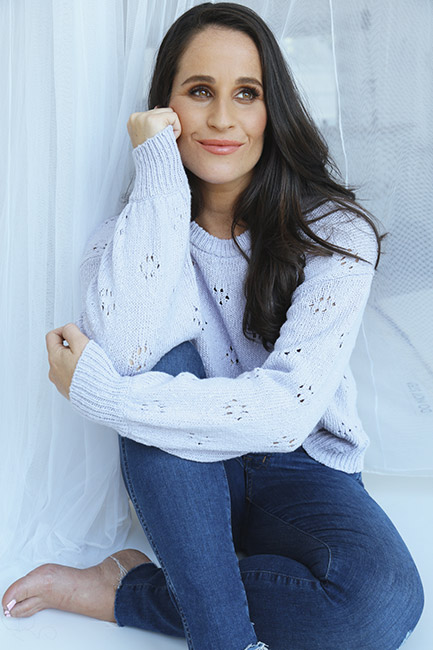 Now tell us about your work as fan favorite Valkyrian Prime in the College Humor series Troopers?

Well Valkyrian Prime is described as “A sleek, uniformed trooper. She is a force of raw evil known as “The Mistress of Management” and “The Iron Consultant.” She is confident, deadly & ruthless.”

Honestly she was a dream role to play. Someone who gives zero f*cks about what anyone thinks of her and has all the power in almost every situation.

The tone of Troopers is definitely a combination of Sci Fi and wacky comedy. My job was very much to be the straight man to the College Humor cast members with all the jokes and one-liners but I’ll take it!

I was cast straight out of drama school as a lead in the Irish thriller “Dead Bodies” opposite Andrew Scott and Kelly Reilly. It was nominated for Best Film at the Irish Film and Television Awards. (IFTAs)

I was a series regular on the Irish sketch show “Stew” for both seasons and played everything from a gun running nun to a ditzy model! The first season was Winner of Best Entertainment Programme at the IFTA Awards in 2005.

I’ve performed in all the major theatres in Dublin including The National Theatre of Ireland (The Abbey), The Gate, Project Arts Centre, The Olympia & Samuel Beckett Centre as well as touring Nationally across Ireland.

Stateside I was cast in the LA Premiere of “The Hairy Ape”, directed by English Theatre legend Steven Berkoff at The Odyssey Theatre, Los Angeles.

I have a lot of fun playing really strong women. As an actor one of the gifts I find in my work is the permission to say and do things in character that I might never do myself.

How is the life of a Voice Over Artist in Hollywood? Is it a very competitive market as the acting business?

The market for voice overs in Hollywood is definitely much larger and more difficult to break into than the one I was used to in Dublin. There’s also the added element of big celebrities doing massive campaigns which wouldn’t be as prevalent in Ireland.

On the acting front stay tuned… On the personal front Baby #2 coming February 2020!

Sharon Horgan is an Irish actor/writer/producer who’s currently on fire! Her Amazon show ‘Catastrophe’ is side splittingly funny whilst appealing to my Irish sense of humour and her US show “Divorce” is painful in its accuracy and vulnerability. She’s a mother who is creative and manages to combine the two flawlessly. I aspire to do the same myself and would love the opportunity to work and learn from her.

I have sporadic taste in music – I went to see Neil Diamond at the Hollywood Bowl a few years ago and will be seeing Lizzo in concert in a few weeks!

A hike in the sunshine with my husband, son and dog at the trails near our home followed by a delicious brunch at one of our favourite restaurants. Then a nap for everyone! After that a dip in our pool and finishing off the evening with some delicious Italian food and red wine – heaven!

I’m a Champion Irish Dancer as well as being double jointed!

At home, healthy with my family around me. Bliss.

I’d love to meet Michelle Obama. I recently finished her book “Becoming” and fell for her hard. I find her so inspirational as a professional, mother and wife and would love the chance to pick her brain.

I adore my morning smoothie that I make at home – Protein powder, water, ice, non dairy milk, nut butter, flaxseed meal, as much spinach as I can fit in the blender & frozen berries!!!

Anything Italian with a big glass of red wine on the side!

Bark n Bitches – this is where we rescued our beloved pup “Lady” from. It is a beautiful upscale dog boutique that is also one of Los Angeles’s premier humane pet shops. They rescue all their dogs from high kill shelters around the city and make them accessible in one place for anyone to adopt.

Unicef – my son was born in a Unicef certified “Baby Friendly” hospital. A maternity facility can be designated ‘baby-friendly’ when it does not accept free or low-cost breastmilk substitutes, feeding bottles or teats, and has implemented 10 specific steps to support successful breastfeeding. My experience there was phenomenal and the level of support I received around nursing and taking care of my baby myself meant so much to me.

Planned Parenthood – when I first moved to the States I didn’t know a single person let alone have health insurance. Planned Parenthood provided a place I could go to responsibly look after my health on a sliding scale. The ability for a woman to make informed decisions and have autonomy over her body is an essential right that I will never take for granted.

Quote: ‘What’s for you won’t pass you”

Drink: A filthy Tito’s martini with extra blue cheese olives on the side

Song: “You’ve Got The Love’ the Florence & the Machine cover

Movie: “Four Weddings and a Funeral”