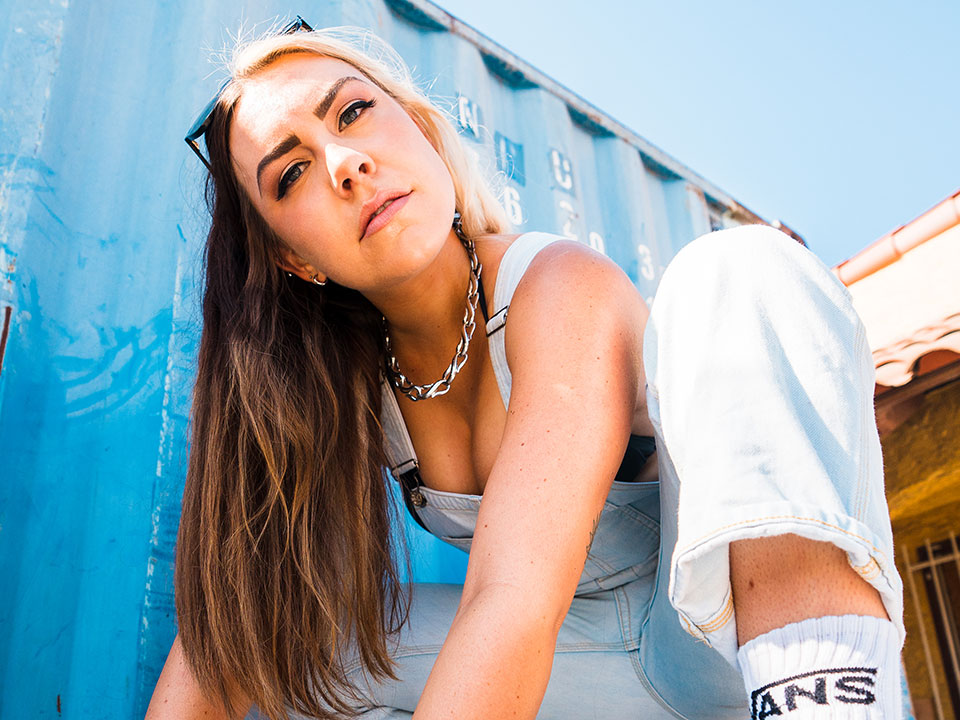 Speaking on the new single MEGG shares, “Met a guy, started dating, did a lot of drugs together, drank a lot – it was the epitome of a toxic relationship: high highs, low lows and I couldn’t stay away from nicotine. We were just fuckin chaotic together. The song goes hard, it’s fun & makes you wanna scream along.”

LA’s South Bay born & raised Alt/Pop artist, MEGG is the life of the party, a rowdy beach rat and can’t help but become your best friend. With a voice that sounds like the lovechild of Hayley Williams and Gwen Stefani, you can’t help but be captivated by the strength and grit of her vocals and her attention commanding stage presence. Recently signing a publishing deal with Reel Muzik Werks, fans can expect new music from MEGG coming soon.

I’ve been on stage since I was 6, starting writing songs when I was 10 and was one of the founding members of a girl group when I was 16 working with Mel B (my favorite spice girl – life changing), Alex Cantrall and Stevie Mackey while attending the LA County High School for the Arts – that was the start of my “professional” career. After that, I was 1 of 5 vocalists to be accepted into and graduate from the first year of the Popular Music Performance Major out of USC where I started writing songs, releasing music and playing shows as MEGG. Haven’t stopped since!

It hasn’t really? I was one of those kids who knew exactly what I wanted to do from a young age so this has always been my life.

My parents and Britney Spears. I gravitated towards music as a baby and my parents always played loud music through the house speakers growing up so it’s always been a part of my life. I was a very opinionated kid who LOVED to entertain so writing music and performing just kinda came naturally. When Britney first hit the scene, I would watch her performances and music videos for houurrssss, she really sealed the deal for me. Watching her was like “Oh, THIS is what I want to do”. I’ve always known my path was music, I fucking love to entertain.

Definitely. I get more nervous about putting music out and all the outside factors I can’t control than I do about performing or being in the studio – those places feel like home to me. I just get antsy before getting on stage, like I just wanna be up there and doing it. The waiting period kills me. 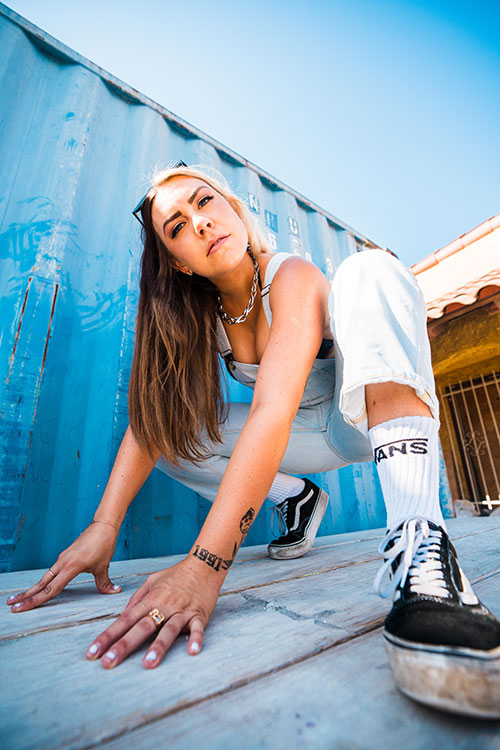 Tell us about your new single “Hitting Nicotine?”

I wrote it with my long time friend Matias Mora, who also produced it. It’s definitely my favorite song I’ve put out so far, feels like a new chapter and I think some of my best work. I love working with Matias, he’s such a musical genius and just knows exactly what I want to make. He gets me as a human and as an artist and I’m so lucky for that, I feel like you can hear our chemistry on the track. When we were writing it, I came into the studio high on a guy, showed him a few songs I had been playing on repeat, he started laying down drums and guitars, I heard the chorus melody right away and then he threw me into the booth for the verses – they were almost like a freestyle, totally off the cuff. “Hitting Nicotine” is a party – it’s raw, its fun and heavy in all the right places, I love it.

The story is a tale as old as time – it’s about being addicted to a relationship that isn’t good for you. The high highs and low lows of a toxic relationship that feel like a punch to the face and a hot make out at the same time. This guy and I were CHAOTIC together in the best way, we got each other and had the best time together but it just wasn’t sustainable. I knew it wouldn’t and shouldn’t last but it was fun as fuck and I couldn’t stay away. It was like butterflies in your gut and a blaring alarm in your head – it was a wild ride and it threw me back on nicotine real quick.

Making it. Making music and creating visuals is so fun for me. I’ve always seen the visual for songs when I’m writing them, the music and the visual go hand in hand in my brain. Sharing the finished product is such a high but collaborating with my friends on these projects is definitely the most rewarding part.

The War of Art.

Oh man… I’d say to make music and create art that YOU like, that YOU want to make. I feel like I spent so many years creating and writing songs I though people wanted from me and being this “digestible” artist that I was told I needed to be in order to “succeed” and it was all crap. Once I started writing songs and making shit for me, it changed the game. The music just has to feel good and it always does when you the creator are obsessed with what you’re making. 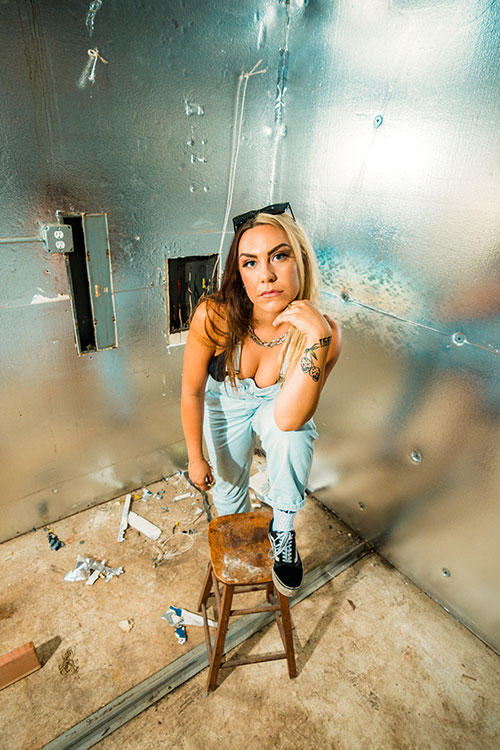 To lean all the way into yourself, the real you and not care what other people think. The reality is, people care way more about themselves than they ever will you so you just gotta do you and be you. Who cares about the rest.

So I texted 2 of my best friends and asked them this, here is a snippet from each:
“Meg is the most genuine person you will ever find. She knows who she is and she is unabashedly herself 100% of the time. This side of her makes everyone more comfortable to be themselves when they’re around her. Meg makes life so much more fun with her positive attitude and hilarious sense of humor but she’s also the one who will have your back no matter what. “While she is kind, genuine and the biggest cuddle bug she is also incredibly strong, driven with a take-no-shit attitude and will beat the shit out of you if you’re in a laughing fit with her! Her openness is admirable – always willing to listen, love and learn in any situation.”

Their responses made me cry so I’m gonna save the full versions for myself.

I really want to release some of the new music I’ve been sitting on but feeling like I should wait until the new year. I’m sure I’ll put out some type of Christmas song or something, I love Christmas music. Definitely play some shows, make some more content and get ready to release a whole bunch of shit in the new year.

Veggies! I love ‘em all.

Being happy is being grateful for what you already have and making time for the people and things you love.It’s letting go of the things you can’t control and executing what you can with 110%. It’s showing up everyday as your best self and when you can’t, trying again the next day. It’s being alive and present in each moment that we are blessed to have.

God. I have so many questions.

Someone once told me: “No one can be the artist you are, tell your stories from your perspective or write the music you do… only you can.” That took so much pressure off to be anything other than who I already am. It gave me permission to lean into myself cuz we can only really be ourselves.

Love Like Lexi! I was informed of baby angel Lexi’s story by a good friend of mine and became instantly attached to helping this cause. Please consider donating to the Love Like Lexi foundation and learn how you can help support Dr. A’s research in alternate, non-toxic based chemo for children. lovelikelexi.org

Massive tours, albums, collaborations with artists and bands I look up to, synchs and song placements, traveling the world to make and play music, connecting with new people and audiences – a bigger and more leveled up version of what I do now. I just wanna create and play music, share it with as many people as I can, connect with new audiences and make a living doing it.

You Are So Beautiful – Joe Cocker’s version. My parents used to sing this to me every night as a kid.

Ugh. It’s a bad drug. I hate the mindless scrolling, love the connection with far away friends/family, hate the comparative nature, love sharing good news/projects, hate that it’s become a “worth or talent definer” and honestly it gives me major anxiety. It’s fun when it’s fun and pretty shitty otherwise – great platform to share art but at times feels like it simultaneously takes the joy out of it.

Book: The War of Art