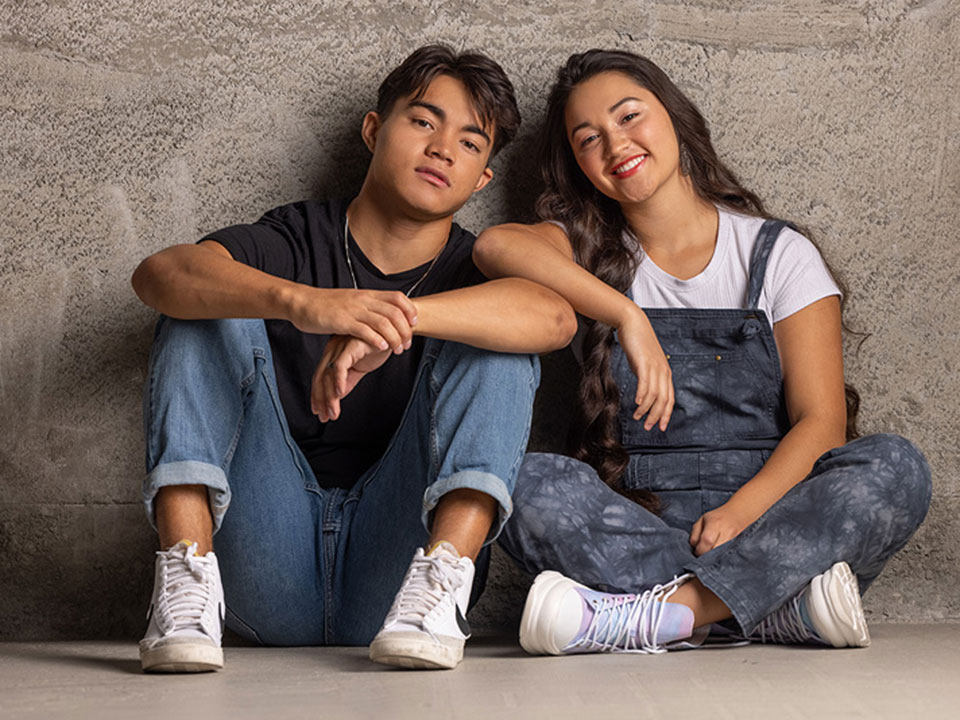 Check out our interview with American Idol alums, and sensational singer and songwriters – Ammon and Liahona Olayan who are thrilled about their upcoming American Idol Tour in 2023. Ammon and Liahona will be on the bill with these other American Idol Alums; Sheena, Max Muscato, Nico Annello, Raine Stern, Marissa Mckaye and Katie Belle, performing at five different venues, in four different cities. Ammon and Liahona are coming off of a hugely successful three-city tour, starting in Bluffdale, Utah, then Pueblo, Colorado, and finally they’re hometown Honolulu, Hawaii.

Ammon and Liahona will be performing songs from their highly anticipated album of self-penned original songs entitled, “Gotta Move On.” Ammon and Liahona, released their recent Pop/Christian cross over music video “All For You”, on YouTube on July 19 gaining over 4.5 million views in one month.

Ammon, please tell us a little about you?

Ammon: Music has always been a part of my life, but it wasn’t until I moved to Hawaii and lived in a tent and discovered I could write music. When I was 13 that I started getting into the music industry.

Liahona: When we lived in a tent on the big Island, we discovered we could write music. American Idol was a great opportunity to show our talents and to enter the music industry and ever since then, we’ve been doing music full time.

Ammon: I’ve been able to meet some amazing people, been performing at some awesome places, and still writing music that I hope to release soon.

Liahona: It has given me the opportunity to show the world what I love to do.

Ammon: My parents have been a big part in supporting me and encouraging me to make music. I also have an uncle who writes music and it was actually because of him I started having the desire to try and be like him and write my own songs.

Liahona: Yes, I play the piano.

Ammon: Yes I do, but I am learning new things and getting better everyday.

Liahona: I used to get nervous all the time. But after performing so much, I hardly ever do. I just get excited. 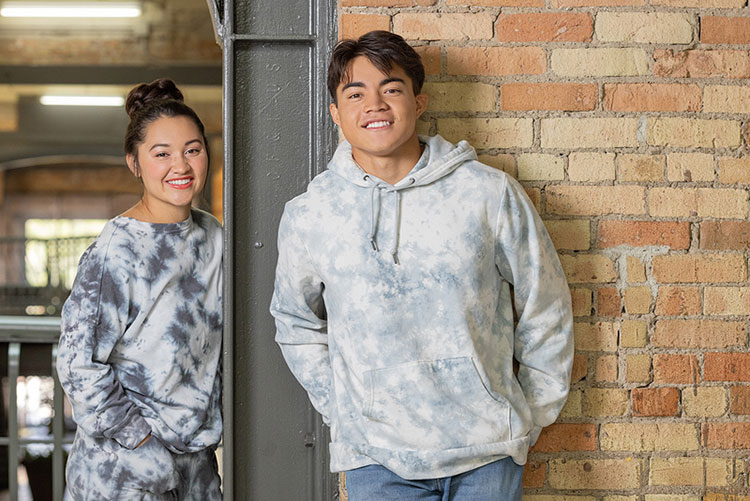 Tell us about your single “Gotta Move On?”

Ammon: “Gotta Move On” is more of a smooth pop song that I wrote with my sister and it’s also the name of our first album. We kind of wanted the beat to carry you and make you feel like you were going with the flow of life.

Liahona: It was such an amazing opportunity to be able to write this song. When you grow up or start a new path in your journey, there are certain things you must leave behind in order to move on, hence the name of this song. There’s a beauty in growing and I feel like our entire album has reflected that.

Ammon: Since Lia and I are growing up it’s a message to ourselves that even though it may be a little intimidating taking on new responsibilities and letting go of certain things. In the end it’s okay to move on and take on new adventures.

Liahona: I just recently graduated from high school and I knew that my journey in school was coming to an end. I felt scared, unprepared, and uncertain of the future. There were many things I was comfortable with in my life and I feared that I wouldn’t be able to have a lot of those things being on my own. But I know those feelings are part of growing up.

And about the huge success on YouTube of your Pop/Christian cross over music video “All For You?”

Ammon: It’s pretty awesome to be able to see the music and vision in our head come to life and people loving it!

Liahona: I can’t tell you how awesome it was to shoot the video for it. Such a spiritual moment for all those that participated and it came out amazing thanks to the producer of the video Nigel Dick. It has over 4.5 million views now and is still growing.

Ammon: To me the most rewarding part is the creating part of this job. Being able to create a song and a beat from scratch and seeing it come together has always been one of my favorite things about the music industry.

Liahona: Creating something people relate to. Writing music is so amazing and I don’t know what I’d do without it. So to be able to share my feelings in a way that people can relate to, that’s the most rewarding to me.

Ammon: “As a Man Thinketh,” by James Allen

Liahona: “No Excuses,” by Kyle Maynard. It doesn’t give financial advice. But it’s a book about how much determination, faith and belief can take you to your dreams and new levels in life, such an inspiring book.

Ammon: The best lessons I’ve learned so far is to learn to be kind and respectful. Don’t be afraid to take chances because it builds character. It is okay to make mistakes and learn to stand for something and believe.

Liahona: Believe in yourself. You don’t need other’s faith or permission to believe that what you do is great. If you believe in yourself, wherever you want to go, that’s where you’re going without a doubt.

Ammon: I would tell my younger self to remember that life was never meant to be easy. But we can receive the help and tools necessary to conquers and accomplish the things we do.

Liahona: To be kind to yourself. I used to be so hard on myself, especially in music that I began to lose my love for something I never thought I would. We need to be kind to ourselves as people because it’s important for our happiness and our progression.

Ammon: I’d probably say they would describe me as a fun, shy, nice person, who likes food.

Liahona: She would say that I am independent, strong, and funny. Those are probably the three words she would use since she knows me so well.

Ammon: I’d say the title of my book would be, “Your weakness leads to a trophy of power.”

Liahona: I’ve never thought of this before. Maybe something like, “Destined for Greatness.”

What’s next for Ammon & Liahona Olayan in the last months of 2022?

Ammon: Right now, we are writing a Christmas EP that we are going to release in November and our full new album will be dropping too!

Liahona: We are writing our Christmas EP and will be releasing that in November along with our new full album, “Gotta Move On”.

Ammon: I like Caesar salad sometimes when it has little cherry tomatoes with ranch and croutons.

Liahona: Watermelon, literally the best fruit in the world.

Liahona: Street wear, modern, modest, and sporty. I feel like that’s always been my fashion style.

Ammon: My definition of happiness would be “happiness exists in a mind full of hope and faith, not fear.”

Liahona: My definition of happiness would be God, music and my family.
Being with the people you love and doing what you love.

Ammon: If I could meet someone I’d probably want to meet either Elvis Presley, because my grandma loved him a lot, Bruno Mars, or Muhammad Ali.

Liahona: Michael Jackson, because he was the King of Pop!

Ammon: My dream holiday would be on the beach with food and I’d either go with my family, myself, or someday my future wife.

Liahona: Hawaii with all my family.

Ammon: What if you could do it, you just never wanted it enough.

Liahona: If you can’t stay motivated, stay consistent. Consistency brings back your motivation.

Ammon: Yes, we have been able to be a part of a few suicide prevention performances, and I hope to be able to start my own someday to help children and single mothers.

Ammon: In 5 years I see myself performing around the world with at least 3 number one hit songs, and performing in front of thousands.

Liahona: Singing on stage in front of sold out stadiums, having 5 or more hits songs, touring all over the world and creating music that goes worldwide.

Ammon: A song that has always been one of my favorites is “Just the way you are”. I think Bruno mars is one of the best singers and songwriters.

Liahona: I have a lot of favorite songs but right now my favorite song is my own “All For You.” Because it’s such a personal song about learning to endure thru the trials for someone you love and never giving up.

Ammon: I think social media can be a good thing, but if you build your life and confidence into it then it can be dangerous and bad.

Liahona: It’s a good place for marketing but a bad place for mental health. So I try to stay away from it when I can.

I also wanted to add that we have moved our American Idol tour to next year as we focus on the last quarter of this year and getting our Christmas music and album out. Look out 2023!!!