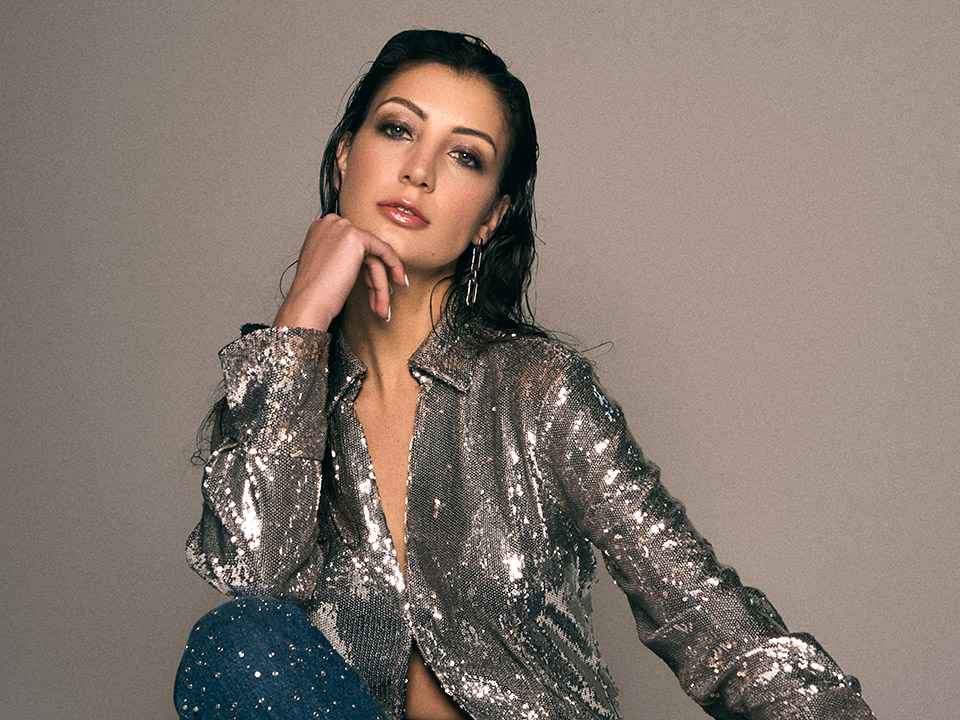 The series tells the story of a young neurosurgeon, ‘Rowan,’ who discovers that she is the unlikely heir to a family of witches and must contend with a sinister presence that has haunted her family for generations. Inman navigated filming her first sex scene while playing ‘Young Deidre’ alongside actor Sam Evans in the series. Fans may recognize her from her recent roles including ‘Lena’ in the horror film “Room 223” and ‘Inga’ in BET’s series “Sacrifice.” 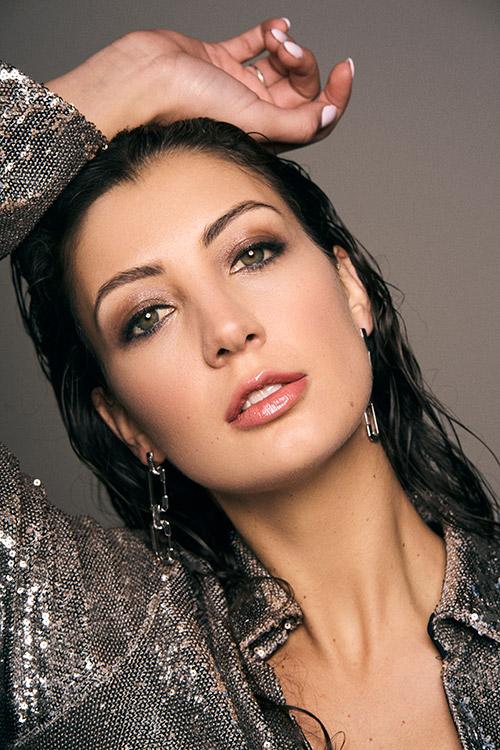 Hi Cameron, please tell us a little about you.

Hi!!! I recently graduated from dental hygiene school and got married in December to the love of my life, Ian. My hubby and I live in Frisco, TX with our two dogs, Tyrion and Bo.

I found my acting studio, DTV, when I was 12 years old. I have been fortunate enough to still be with the same studio and acting coach/manager, Antonia Denardo. She has truly been my guiding light in this industry. She introduced me to my agents and to the casting director who gave me my big break, Ryan Gloriso.

My everyday life has not changed much yet on the outside but on the inside, it has changed immensely. I have been working extremely hard since I was 15 to achieve all my dreams and here I am… years later… achieving them. Acting is a tough industry to break into and people will tend to remind you of that or put your dreams down. I never let that affect my journey and this booking has really validated that I’m following the right path. This most recent project turned my dreams into reality and I am so excited and determined to keep going.

It started when I auditioned for and got the lead role in my 5th-grade musical! It was a musical about Santa University and only boys were allowed to attend. My character, Holli Day, wanted to break the barriers and be the first girl to attend Santa University. I absolutely fell in love with acting because of that.

The best part is discovering new aspects about yourself when digging into a character. I will feel all these emotions I had suppressed and tapping into those feelings is very therapeutic for me. The worst part of being an actress is the judgment and rejection that every actor/actress inevitably faces.

The first thing I do is read the entire script or everything I have been given. I read all the details, descriptions, and the writing between the lines. I then try to find all the similarities and differences between myself and the character. I will always find a way to relate to whatever character I am given and bring pieces of myself to them.

Tell us about your work in AMC’s “Anne Rice’s Mayfair Witches?”

I was given the amazing opportunity to bring the character, Young Dierdre Mayfair, to life. Deirdre Mayfair is the mother of the show’s protagonist Rowan Mayfair (Alexandria Daddario). “Anne Rice’s Mayfair Witches” follows Rowan, a neurosurgeon, and her journey on discovering she is the heir to a powerful family of witches.

And about your work as Lena in the horror film “Room 203” and Inga in BET’s series “Sacrifice?”

The role of Lena in the horror film “Room 203” was so much fun to film. I play Lena, a young woman who just wants to have a romantic evening with her boyfriend but an evil entity has other plans for them. I tend to book roles in the horror vein but Inga from BET’s “Sacrifice” was very different. Inga is the arm candy to Ruby (Morgan Alexandria). It was a very sexy, flirty role and I loved the contrast between the two projects.

I have been a part of multiple short and independent films in Texas. One of my favorites is called Raven. It was my first time having extreme fight choreography and I loved it. I play Raven, an undercover agent, who wakes up in a hospital with no memory of how she got there. As she retraces her steps she uncovers betrayals and a human trafficking ring that she must stop before it’s too late. I have also worked on Disney’s I Didn’t Do It.

I would love to play any period piece roles. I am a huge history nerd so I would love to just dive into the life of any historical person. My favorite eras would be the medieval era (Game of Thrones, House of the Dragon), the regency era (Bridgerton), and the progressive era (Peaky Blinders). I would also love to be a part of the Star Wars universe in any way shape or form. I love fantasy and lore.

I have been trying to break into the industry for a while now and this role has allowed me to put my foot in the door. I have had so many messages from friends and family stating how proud they are of me. However, the most rewarding messages are messages stating that watching me live my dream has inspired them to live their dream. That it isn’t too late to pursue what truly makes them happy. Those messages make my day.

My advice for new actors would be to always, always, ALWAYS believe in yourself and your worth. There will be more people against you than for you, but you just have to hold your head high. The hardest part is preserving. There are so many “No’s” in this business but it just makes it that much more rewarding when you finally get that “Yes”.

Personally, I love the book “Get Out of Your Own Way” by Mark Goulston M.D. and Philip Goldberg. I think a lot of actors and actresses get in their own heads and have this self-defeating behavior because this business is so daunting. It is so easy to feel self-doubt and this book, for me, really allowed me to recognize my negative emotions and address them.

I learned that success is measured differently for everyone and that this business is truly a marathon, not a sprint.

You are going to feel self-doubt along the way… Don’t let that set in. People you admire and love will tell you that you will never make it… Ignore them. You are going to experience so much heartbreak along the way to where you are now… but it really does help you grow to become who you are. I know that the years will go by and you will feel like you’ve accomplished nothing but just hold on babe because guess what? YOU DID IT. You booked a dream role and it is so worth the long difficult journey. Preserve Queen… Preserve.

I texted my best friend Rebekah and asked how she would describe me in 3 words and she sent the following: Only three?! Adventurous, goofy, warm, my bumble best friend, best dancing queen… three words do not do you justice… outgoing, hardworking, driven, passionate, and flexible. You have a big heart and you are always there when I need you.

Resilient. I would give myself this book title because life has thrown many obstacles in my path but I have always found some inner strength within me and continued on with the pursuit of my dreams.

I am hoping to be working on a new film or tv projects all of 2023!

I would explain my fashion style as… all over the place. I do not have a specific style I stick with. One day I will wear a black dress with knee-high black Doc Martin boots, and the next day I will be wearing a sparkly pink cocktail dress with Steve Madden baby doll heels.

Happiness comes in many different forms and looks different for everyone. Happiness for me can be a smell, a taste, a memory… feeling true content in that moment of time.

I would love to meet Meryl Streep. She is a phenomenal actress and I would love to just sit and listen to her story of preserving and making it into this industry.

I would go on a huge tour of all of Europe with my husband Ian.

Never compare your journey to someone else’s journey.

I do! I donate to CARE every month and I also donate to any suicide or breast cancer charities when I can.

I see myself working in the industry full-time. I would love to be a series regular on a show or working on a gritty period piece film.

“To Where You Are” By Josh Groban. It was the first song I had ever heard by Josh Groban and that is the song that made him my favorite artist. I lost 3 of my 4 grandparents and this song reminds me of them and every time I hear it I feel like they are close by.

I have a hard time keeping up with social media! I have an Instagram and that is all I can manage to be honest with you. It can be exhausting trying to live up to these social media standards. I do enjoy posting on Instagram and seeing my friends’ posts. I also love watching funny videos with my husband. I will save at least 20 videos throughout the day and come home and make my husband watch them with me.

Book: Well, I do have a favorite author, Stephan King. I can’t pick my favorite book… I have way too many! I love the Harry Potter series, and A song of Fire and Ice series but, if I had to pick just one book… The Great Gatsby by Scott Fitzgerald.

Movie: Titanic! It has been my favorite movie since I was eight years old.

Tv Series: This is almost impossible for me to choose. Game of Thrones and Breaking Bad are my absolute favorites.

Favorite Food: Sushi for sure.

Travel Destination: Ohhh this one is hard. I would say Spain or Ireland. I lived in Spain with my family (my dad was adopted from Spain) for six months and I loved it. I was able to visit Ireland while I was there and I felt so happy there.