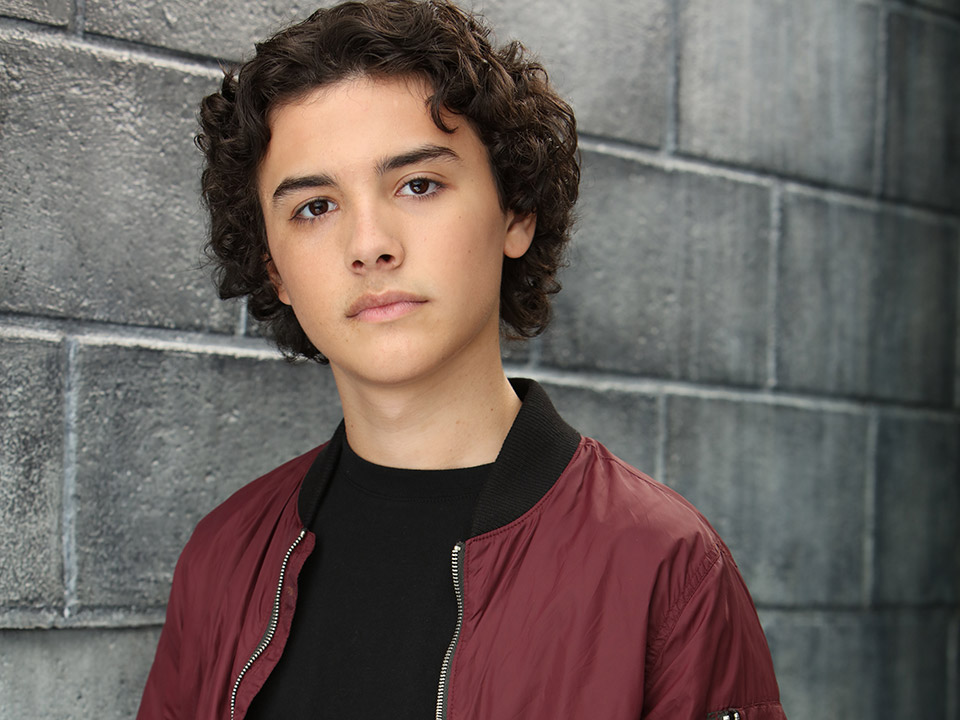 Check out our interview with award winning actor Hunter Payton.

Hunter is a guest star on Disney’s Raven’s Home. He plays a LEAD role in the feature film A Genie’s Tale opposite Jake Paul and Laura Murano releasing early 2020. He is best known for his RECURRING role as Young Andrew on NBC’s A TO Z. He also plays the role of Patrick Douglas alongside Mischa Barton and Sean Ferris in The Joneses Unplugged,

His other credits include a GUEST STAR on Criminal Minds and a lead in the Comedy Central Pilot Better Dumber Faster with Kurt Braunohler. In 2018, Hunter won two awards for the film FATHER’S DAY BREAKFAST at the Malibu Film Festival, and a Young Entertainers Award for the same role. In 2017 Hunter won a Young Artist Award for Best Performance in a Digital TV Series or Film for his role in WHO’S DRIVING DOUG.

Hunter is also a philanthropist and is very involved with giving back to the community. As a result of his volunteer work, he is a Youth Ambassador for The Shoe Crew, Free2LUV and Boo2Bullying. Hunter founded his own charity, Hats For Thoughts to raise awareness about Alzheimer’s Disease in 2017. 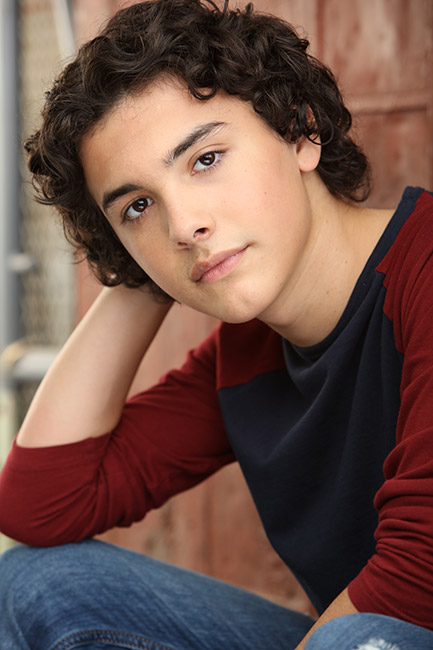 I am 15 years old, born and raised in Los Angeles and half hispanic. I have been acting since I was 6 years old, love to play video games and if there is something I can jump, flip or swing off of I will. I still love talking about Dinosaurs and hope some day to be a paleontologist. Dream role would be to book something with Marvel where I could do my own stunts.

Since I was really little I would always try to make people laugh and smile. I would watch shows like the Wiggles, Mary Poppins and Grease on TV and I would sing and dance along on our coffee table. I would tell my mom I wanted to be on TV just like them but at the time we could not afford acting classes. When I was about 6 year old, we were walking around at a local street fair and an acting school approached us after seeing me dance around and offered us classes to come try it out. The rest is history.

Besides all the amazing people I have worked with, I have also grown as a person through the different roles I have played. I have faced rejection and continued to keep a positive outlook on life and look forward to what’s next.

Tell us about your work as a guest star on Disney’s “Raven’s Home?”

This was the first Disney show I booked and all I can say is that it will definitely be an episode to not miss about friendships and peer pressure. I can’t say much more about the episode but I had a blast working with the cast on “Raven’s Home” as Jordan and getting to play a role opposite of who I am. The cast was great! Comes out in February on Disney Channel so check it out.

And tell us about your work in “The Joneses Unplugged,” and about your role as Patrick Douglas?

I had so much fun working on “The Joneses Unplugged” because I not only got to work with the producers and writers on a scene idea about Dinosaurs but I also got nominated for a Young Entertainer Award for Best Supporting Actor. In my scene, I have an App idea where you have a pet dinosaur and you watch him grow up so illustrations were created to show the growth of the Dinosaur which I helped draw. So, it was really awesome to be able to help create a scene I got to act in.

How was working alongside Mischa Barton and Sean Ferris?

Everybody on set was great but I mostly worked with Sean Faris in my scenes. My character Patrick was kind of the glue that helped my school teacher, Sean Faris (Pretty Little Liars) notice things that may help his marriage to his wife, Mischa Barton (The OC). Hopefully everyone will get a chance to watch “The Joneses Unplugged” as it is a family friendly movie that teaches us how important it is to go unplugged with electronics and spend time with the people we care about. Currently still airing weekly on www.PixLTV.com so don’t miss it.

Now how was working with a cast like Jake Paul and Laura Marano on the film “A Genie’s Tale?”

Everyone on set was amazing and really great to work with. But finding out I was going to work with Laura Marano and have scenes with her, was super cool because I always admired the cast of Austin & Ally, as it was one of my favorite shows to watch. One of the coolest things that happened on set was on the last day of filming , Jake Paul hired a gourmet ice cream truck to serve ice cream to all the cast and crew. It was great to get to know him and work with him as he is one of the nicest guys. It was a great two months working with everyone and you will love the film. Set to come out late this year.

I was 6 years old when I booked my first role on HBO’s “Funny or Die” with Will Ferrell on an episode called Dry Season 2. Shortly after, I booked a recurring role on NBC’s “AtoZ” as a young Ben Feldman and got to work on the Warner Brothers lot for a year. This was such a fun show to work on because this was the first time I got to work with a stunt coordinator doing my own stunts regularly and realized how much I liked it. After that I played Sullivan in the SyFy movie “Ominous” and as Kevin Bergstrom on “Criminal Minds.”

Now about winning two awards for the film FATHER’S DAY BREAKFAST Best Minor In A Lead Role at the Malibu Film Festival, Best Young Actor at the Young Entertainer Awards, and the Young Artist Award for Best Performance in a Digital TV Series or Film for his role in WHO’S DRIVING DOUG? That’s amazing!! Congrats

Thank you so much. Winning two awards in 2018 for “Father’s Day Breakfast” was super exciting as this was my first movie I ever booked when I was 7 years old. I had learned some sign language for the film for my scenes to communicate with my dad on set, deaf actor Troy Kotsur. To see 7 year old me act in the film 7 years later was really surreal and to see how much I have grown since. Winning an award for my role as a Young RJ Mitte in “Who’s Driving Doug” was also so rewarding because that was one of my most challenging roles I had done at that age. I had done so much research to be able to do that role as I was in a wheel chair with muscular dystrophy for the entire movie. When I won the award the writer Michael Carnick who my role was based on showed up to support me. 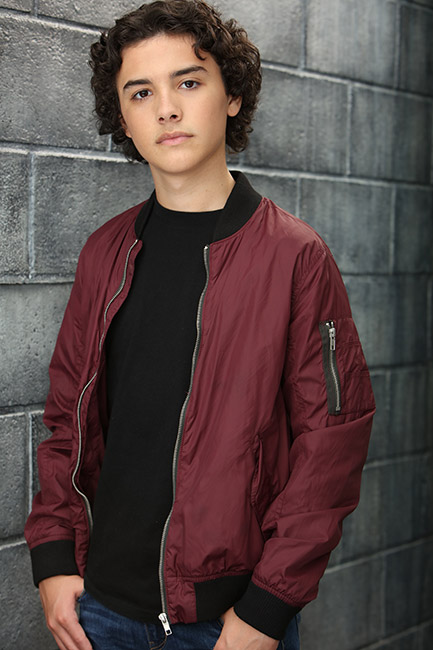 There is so much. I think the most rewarding part about being an actor is that you get to work with so many incredible people and gain lasting friendships. I really enjoy getting to play different roles and bring life to them especially the roles that are completely opposite of me. I love the challenge.

A good friend who is loyal, listens when needed and is funny, goofy and energetic.

In February you can see me as Jordan on Disney Channel’s “Raven’s Home” Ep.24 and later this year as Ryder in the film “A Genie’s Tail.” I just wrapped an episode for Season 2 of “LA’s Finest” starring Jessica Alba and Gabrielle Union coming out around May 2020 on Spectrum cable. I am super excited about this episode as I got to work with a stunt coordinator and do my first fight scene. I am currently still in the National Commercial for Great Call for their Jitterbug cell phone with John Walsh airing everywhere. In February, I will compete for the second time at the Tempest Games for Parkour as well as head to North Carolina to compete at the National Ninja League World Championships.

My own definition of happiness is being able to do what I love every day.

A normal day in my life is waking up and letting the dogs out. While eating breakfast I check social media and snap chat my friends. I then log onto my computer and go on line so I can start working on school. In between school lessons I play video games and run lines for auditions. In the afternoon, depending on the day I either head to the gym for a 2 hour private with my Ninja coach or to my other gym for Parkour and sometimes I do both. When I get home I continue doing school work and play video games on line with my friends.

My idea of a perfect Sunday would be to hang out with my friends and do parkour.

If I could meet anyone it would be The Rock, Dwayne Johnson as he is a huge inspiration to me. His story about what he went through and how no matter how difficult things got he continued to work hard and never gave up. Today he is still just as hard working and continues to inspire others like me with positive words.

My favorite healthy food is broccoli.

My favorite cheat food is a double double plain cheeseburger from In-N-Out.

The best advice I was ever given was from my mom that when you think the world is going against you and nothing seems to be going right, look around you and appreciate all that you have as it could always be worse. So stay true to yourself, stay humble and be a reflection of the best version of yourself. 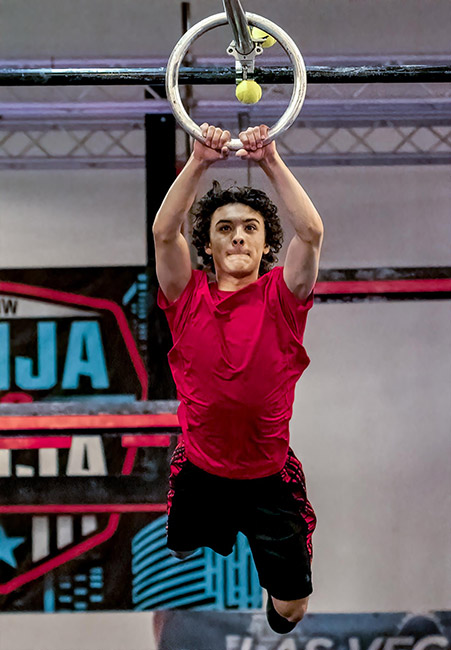 Yes, I support anti-bullying, animal and homeless charities. I am hoping to launch my charity Hats for Thoughts in honor of my grandpa who passed away from Alzheimer’s. It was my grandpa who helped me gain a love for science, dinosaurs, hats and taught me to work hard for whatever I want.

My family, friends and the ability to do parkour

In 5 years I see myself in college for Paleontology as well as a series regular on a TV Show and wrapping up a film I play the lead in that I get to do my own stunts.

I have several songs I like but currently I would have to say it is “Lonely Dance” by Set It Off because sometimes you need to walk to the beat of your own drum.

I honestly like all types of music from Elvis Presley to Sublime to Panic! At The Disco to metal music like Slip Knot.

I think social media is a great way for everyone to express themselves. I like to use Social Media to let everyone know what I am up to and see what my friends are up to.

Quotes: “You may encounter many defeats but you must not be defeated.” By Dr. Maya Angelou