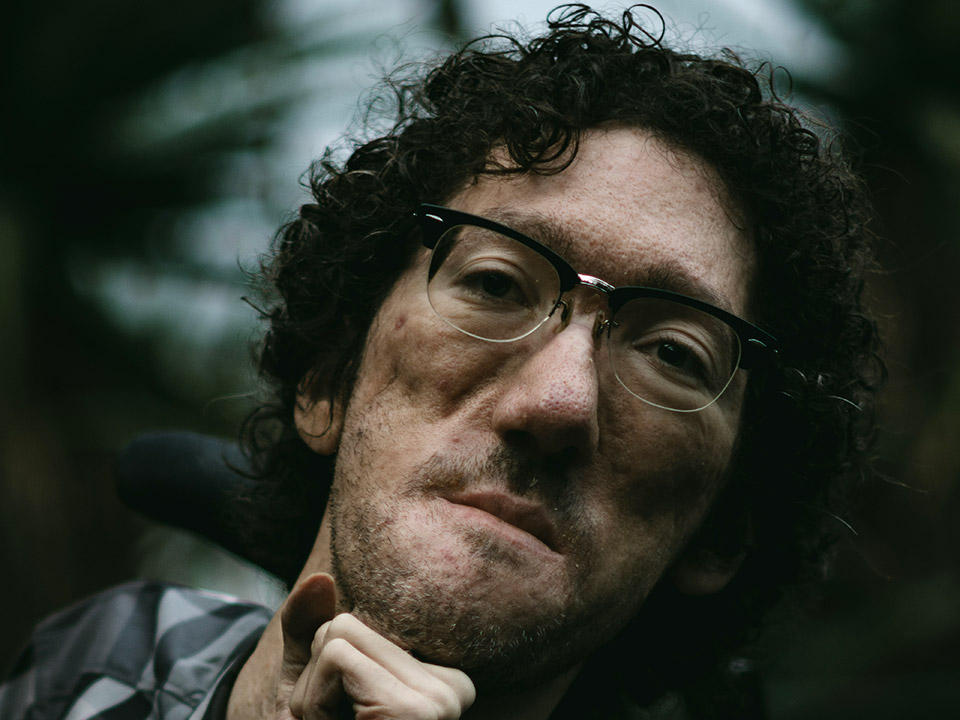 Our interview with award-winning writer and Executive Producer Michael Carnick who was born with a rare form of Muscular Dystrophy, and as a result he uses an electric wheelchair. When he was an undergraduate at UCSD, he won the grand prize at the Sam Goldwyn Writing Awards 50th Anniversary for the first script he ever wrote. He wrote and directed the pilot MANNY FANTASMA which premiered at the Santa Monica International Film Festival in December 2018 and won Royal Wolf Platinum Awards for Best Comedy and Best Director and has gone on to win several additional awards. Michael has also written and produced several films including WHO’S DRIVING DOUG which premiered at the Santa Barbara International Film Festival in 2016 and is now available on Netflix, iTunes, and Amazon. He was also the writer and Executive Producer for the film ROLLING ROMANCE which screened at several festivals. He has been the recipient of many additional awards, including LA Comedy Fest Best Sitcom Pilot (2015), San Diego Jewish Film Festival Best Local Filmmaker (2014), Malibu Film Festival Best Original Screenplay (2013), The Indie Fest Best in Show (2013), and Creative World Awards Original Sitcom Winner (2010).

Hi Michael, please tell us a little about you?

The ability to remain calm under pressure. Then I freak out later.

When I’m not writing, I enjoy playing computer games and watching TV or listening to podcasts. Pretty geeky stuff.

My parents. They’ll always be my biggest fans.

After I won the Samuel Goldwyn Writing Awards, I was thrust into the spotlight. Suddenly, I was getting calls from studios and agents. I was still an undergrad in college and had no idea what I was doing. I still don’t, but I’ve learned a few things over the past decade.

What was your first project as writer and Executive Producer?

The first film I wrote and produced was a short romantic comedy called “Rolling Romance.” It was about two youngsters with Muscular Dystrophy that go on a blind date, and a lot of things go wrong. It was heavily based on true events, and while it was mildly traumatizing at the time, those experiences turned into some pretty funny and heartfelt cinema. Rolling Romance screened worldwide, including Los Angeles, New York, Madrid, and St. Tropez. It picked up several awards and was a great filming experience. A very fun, dedicated crew.

What is the best and worst part of being in the industry?

The best part is that we get to play grown up pretend. You can really let your imagination go wild, and part of it is like being a kid again. Unfortunately, the glamorous aspect of the industry attracts some pretty nasty, narcissistic individuals that prey on the kind and vulnerable. I’ve had the misfortune of mixing up with some of these people, but it’s made me a better judge of character.

How do balance your personal life with your busy life?

One of my high school mentors told me that “life is just a game.” Cosmically, on a grand scale, we’re all individually pretty insignificant. It really helps put things into perspective when you feel down about first world problems, or when you’re dealing with actual real tragedy or health issues. Things may come up that hurt and cause pain, but time heals everything, and in the end we just need to laugh. Life should be fun, like a game.

Generally, I tend to let other people get in front of the camera. I like to hide behind the scenes, it’s much less pressure.

In 2003 I took an undergrad screenwriting course at UCSD. Our final assignment was to write the first 30 pages of a screenplay. I really got into it and wrote the entire 120 page thing, and turned it in. My mentor Allan Havis convinced me to enter the contest, and I begrudgingly complied. When I found out that I had won, I was totally blown away. Normally the Samual Goldwyn Writing Awards are dominated by MFA students. I was the first undergrad to win, and the voting was unanimous. I was not expecting it at all, but it was a very pleasant surprise.

And about the projects “Manny Fantasma,” and “Who’s Driving Doug?”

“Who’s Driving Doug” is about a sheltered, intelligent college student DOUG (RJ Mitte of “Breaking Bad”) that changes his life forever when he hires an underachieving driver SCOTT (Ray William Johnson of “Equals Three”). In order to escape his oppressively loving MOTHER (Daphne Zuniga), Doug agrees to go on a spontaneous road trip with Scott and his college crush STEPHANIE (Paloma Kwiatkowski of “Bates Motel”). At the height of the journey, a tragic series of events tests their bond and opens the road to self discovery. Drugs, gambling, and romance await the three friends in this honest American coming of age drama. It’s currently available on Amazon, YouTube, iTunes, and DVD.

“Manny Fantasma” is about a paranormal psychiatrist that deals with a variety of supernatural patients while battling is own inner demons. It’s a half hour TV spec pilot that’s currently running the festival circuit and being shopped around for distribution. It’s also the first project that I’ve directed as well as written.

I run a screenplay competition for University of Riverside, California students called “Write to Film.” It’s an annual thing where students can submit screenplays, and the best one is given prize money and I produce and direct it on campus with the help of students and faculty. It’s a totally free thing to enter, and it’s a nice opportunity for younger people to see their creations come to life. I know how important it is for beginners to receive that early sense of validation. A little pat on the back goes on a long way, and seeing your work produced for the first time is like a dream. It’s just my way of giving back to my alma mater, and the mentors that have helped me tremendously along the way.

I’ve also been the subject of a short documentary called “Mike’s Words” that was directed by Jared Jacobsen. It’s currently going around film festivals, so that’s pretty cool.

What is next for Michael Carnick in 2019?

I’m currently in preproduction for a feature film about an Ethiopian rabbi that was airlifted to Israel during Operation Solomon. It’s being filmed in San Diego later this Summer. It’s based on an award winning play that I wrote, and it will be my second time directing.

That’s a huge question. I have several favorite actors and actresses, both living and dead. Currently I’ve been hugely impressed by Jeffrey Wright. He really disappears into his roles, and can wear many different parts pretty flawlessly. He has an amazing range.

My favorite band is Death Cab for Cutie. They were featured heavily in my film Who’s Driving Doug. I also really dig some film composers. James Horner is my favorite.

Playing video games, spending time with close friends, and catching up on the latest episode of whatever show I’m currently into.

I hate avocado. There. I said it.

Waking up to a purring cat by your face.

Alan Ball is one of my screenwriting heroes. I’d love to meet him and pick his brain.

Game of Thrones and Westworld are two my current obsessions.

Quote: “All boundaries are conventions, waiting to be transcended.” – from Cloud Atlas

Interview with singer/songwriter and producer Andrea