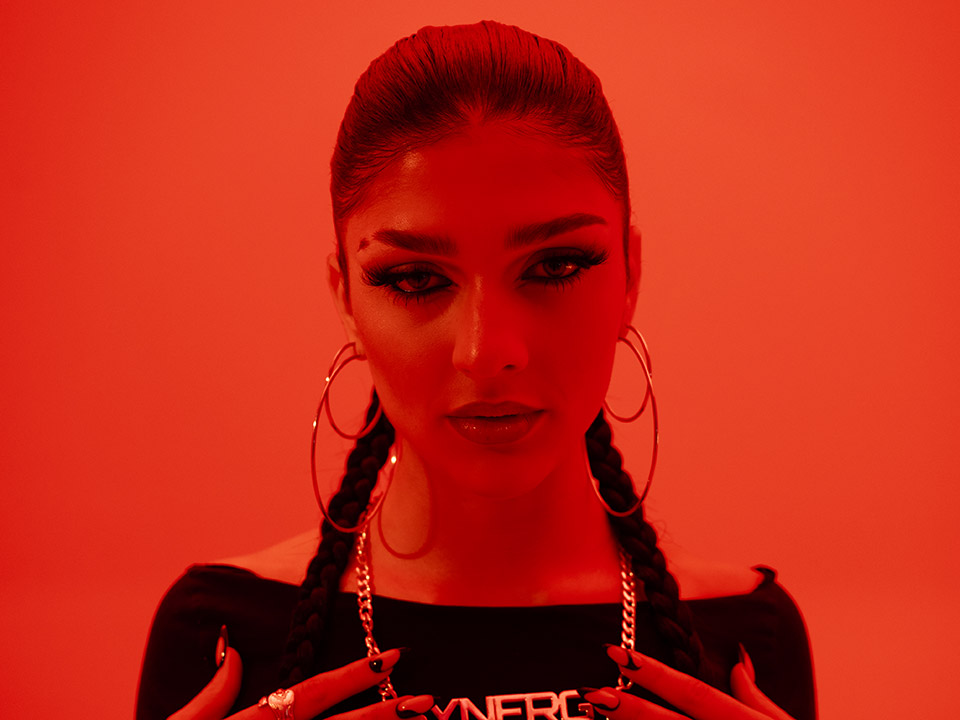 Check out our interview with Canadian singer-songwriter Chloe Florence who recently released her latest single “Synergy”, alongside featured artist Myles Lloyd. In a collaboration like no other, her latest endeavour explores a recurring late night romance, one which finesses her ability to showcase the very highs and lows of self-discovery. She confides, “Sonically, Synergy embodies the tipping point, right before one confesses their feelings for the other. They’re addicted to playing with fire as they haven’t been burned (yet). There are feelings hidden under covers and subliminal messages found between the lines of their late-night conversations – in bed and during late night drives. The lyrics depict the situationship as lustful, mysterious, dangerous, and intense.”

Hi Chloe, please tell us a little about you?

Hey! I’m a singer/songwriter and all-around creative from Montreal, Canada.

At eighteen I went through my first heartbreak and could not stop writing songs. I realized I could not just let all the music I had written waste away so I found a producer and made my first EP, and I have not stopped since.

Music has always been my life, but now I am making it my career. For a while I was in school daydreaming of pursuing music full time. After that heartbreak and surge of inspiration allowed me to create my first EP, I then was encouraged to make a second EP, and then I kept releasing singles, and then I dropped out of university. Music is my be-all and end-all. I know I am quite capable of succeeding, I just have to keep the ball rolling.

In my childhood home there was a baby grand piano and I remember being so fascinated by it. I used to sit next to my dad as he played and hit random keys. Growing up I listened to a lot of the Beatles and Elvis thanks to my dad, and my mom used to blast Madonna, Gwen Stefani, Mariah Carey, Beyoncé, all the quintessential 2000s divas. I was obsessed with knowing the meaning behind the songs, I would look up the lyrics and dissect them. I was seven and trying to understand the meaning behind “Material Girl” hahaha. I begged my parents to take singing lessons and then I started learning how to play the piano so I could accompany myself. Eventually I discovered Lana Del Rey and Amy Winehouse and fell in love with the way they wrote songs, the way they sang, and their carefully crafted worlds/personas… So I started to create my own.

I play the piano and the guitar. I play by ear and know just enough to be able to write songs, I don’t think I would classify myself as a musician per se. Weirdly I get more nervous in the studio than I do on stage. I can get in my own way sometimes but that usually gets resolved if I’m around the right producers/friends.

Tell us about your new single “Synergy” ft. Myles Lloyd?

Synergy is different from any song I’ve put out. I’m excited to be showcasing this darker and sexier side of my sound.

This song explores a recurring late night romance. Despite calling it casual, feelings develop through raw sexual chemistry. Sonically, “synergy” embodies the tipping point, right before one confesses their feelings for the other. They’re addicted to playing with fire as they haven’t been burned (yet). There are feelings hidden under covers and subliminal messages found between the lines of their late night conversations – in bed and during late night drives. The lyrics depict the situationship as lustful, mysterious, dangerous, and intense.

I was casually dating for a little while, trying to figure out my likes and dislikes, navigating new territory after ending a relationship I had been in for two years. There were a few people I saw myself getting serious with, but I found I kept getting stuck in this place of lust. Dating was corrupt to me, it was all long late nights and scandalous meetings. I think people my age (in their twenties) are truly terrible at falling in love; we always seem to get in our own way. I wanted to make a song that felt sexy and fun but also embodied that fear and longing for something more than just sex.

I love the snowball effect… a thought, a concept, or a journal entry eventually turns into a song to be brought to the studio, then it is conceptualized into a photoshoot or music video, and then released to the world. I love how it brings creatives together to mutually support one another. Everyone becomes a part of this wider project that eventually takes on a life of its own, it’s extremely gratifying. The Art of Seduction by Robert Greene.

Good things take time, try your best and f*ck the rest, and trust your instincts. At the beginning of my journey I was in such a rush to “blow up” but now I know that it will take time. I am more focused on working on my craft and putting in the work so that when it does happen, I’ll be ready. This industry can be tricky so I’ve been trying not to be too hard on myself when certain things do not work out. This is all trial and error, and the importance lies in trying. In terms of trusting my instincts, I used to leave a lot of final decisions to those around me because I was not yet secure enough in myself and my vision to put my foot down. I ended up regretting a few things because I should have spoken up but I did not. However, fear no longer stops me and I now fully trust my own instincts.

Just because you’re not good at something right away does not mean you should stop trying. As a child I think I let my fear of embarrassment stop me from a lot of things I could have excelled at eventually.

I thought about this for way too long and could not come up with anything lmao. I will be taking the last couple of months of 2022 to finish up some upcoming music and plan my next few rollouts. I’ll be back in the spring with some pretty crazy stuff. I’ll continue to do shows and create content in the meantime.

I love a massive crunchy salad with some green goddess dressing. It slaps.

Doing what I love/am passionate about every day, surrounding myself with people that I love and who push me to be my best self (& vice-versa).

Marilyn Monroe, I’d like to know the real story.

I would either go somewhere remote and tropical for a couple of weeks to lay in the sun and make music, or anywhere in Europe to explore and sight-see and eat delicious food. I’d go with my partner <3.

I said it earlier but “try your best and f*ck the rest”, my mom said that to me before a math final once and I’ve since applied it to my entire life hahaha.

I do volunteer work for a local women’s shelter here in Montreal.

Touring my debut and/or second album? Who knows. But I’ll still be working.

This is an impossible question to answer.

I have a love-hate relationship with it, but so does everyone I think.

I’m on all music platforms under “Chloe Florence”, and social media is all @chloeflorenceofficial – but my Twitter is @spacecadetchloe