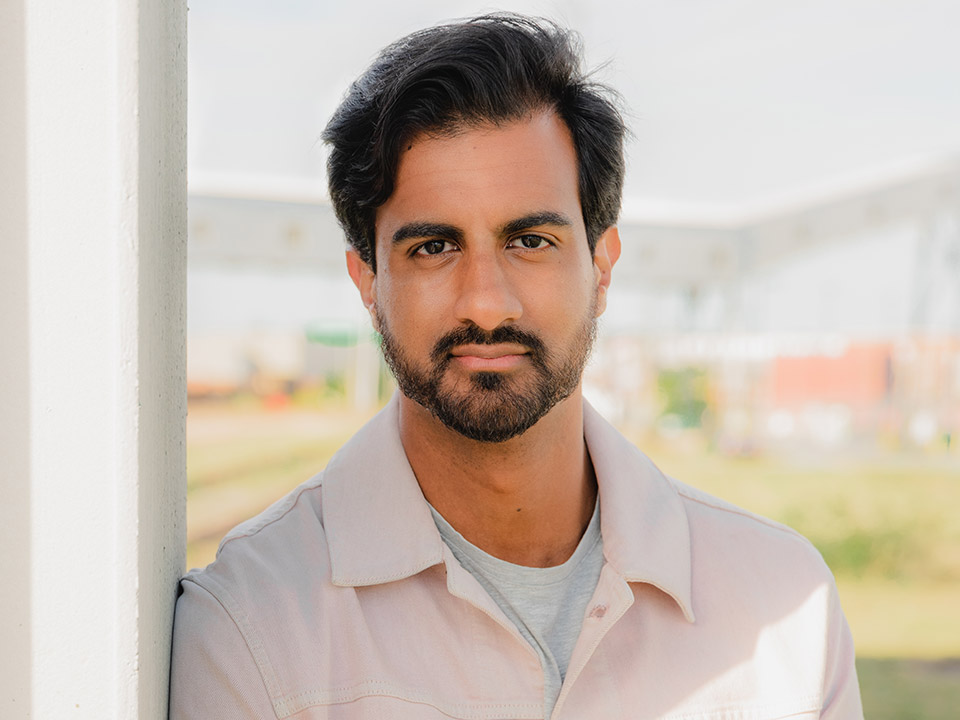 Farid plays the role of Oscar Wallace, an RCMP officer sent undercover to the Moonshine resort to gather some information about an old investigation that is still ongoing. 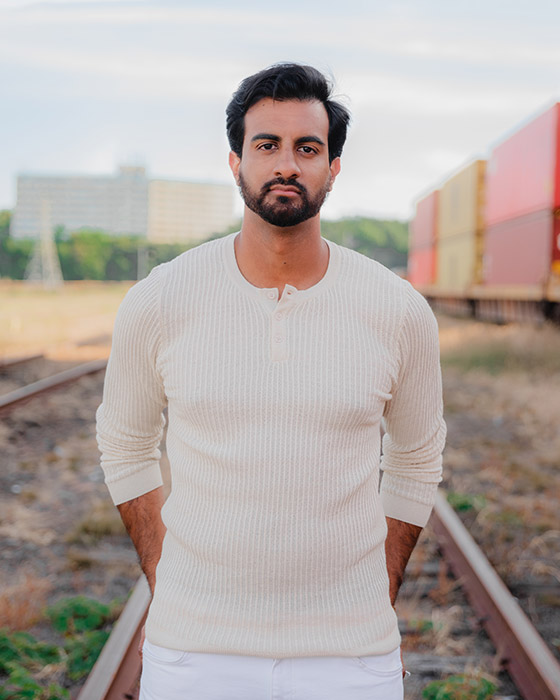 It was a lot of being in the right place at the right time. It all started in Grade 8 for me. I’ve always been the “class clown” and my grade 8 teacher, Mr. John Roots, was amazing. Instead of scolding and suppressing his students’ talents and love for performance, he would encourage them. I remember like it was yesterday: he had come up to me a few months before our graduation and said: “Did you know there’s a school that you can go to, where you get to do this everyday?” That’s when I auditioned for Cawthra Park Regional Arts Program. From there, I definitely went in head first. I realized I wanted to be an actor and nothing else. For College, I attended Humber: Acting for Film & TV program, got myself an agent, and haven’t looked back since (knock on wood).

Happiness would be the best way to describe it. I’ve had a lot of “joe jobs” during my time as a struggling actor. Yet, nothing brings me more happiness than being on set. I feel like I’m in my element and that nothing can stop me. It’s a high that we all chase as actors and it’s made me simply HAPPY.

It would have to be the inconsistencies. It’s one of the few jobs on earth that requires you to re-apply each time. It’s also the one job where if you’re caught doing it (acting)…you’re doing it wrong. The feeling of uncertainty and not knowing what comes next can be very stressful, but at the same time, it keeps life exciting. I think if you look at it from a positive perspective, it can be much more manageable and rewarding.

Luckily I have a great memory, so learning lines doesn’t take too much time. I also prefer not to be too fully memorized so I can discover things in the moment and allow myself to take direction. I personally think if you’re too memorized, it can affect your performance by making things seem too scripted. It’s a fine line…you want to do your homework, but leave it at home when the cameras are rolling. From there on, it’s a lot of collaboration with the writers, directors, and producers. Everyone plays a part in bringing the characters to life and it’s amazing to see all the moving parts come together. When I’m on set and about to film, rehearsal depends on the actor I’m working with. Sometimes we run lines, sometimes we just wait until the cameras are rolling. Every actor is different, and I personally don’t have a preference, so out of respect I also ask what my scene partner would prefer. Then it’s “camera speed, frame, ACTION!”

Tell us about your work on the new series “Moonshine”

Where to begin! It’s such a pleasure to work with Sheri and her entire creative team. I am extremely lucky and grateful. I get to work alongside so many different talented cast members. It’s not too common to have so many actors on one series. I also get to do stunts and even SING! Oscar goes on an incredible journey and I think the audience will have a great time following all of the characters’ arcs.

Honestly, this is probably the most fun I have ever had on a series. Moonshine is a Drama- Comedy, so there are a lot of hilarious moments within the show, but then the writers – on a dime – can turn around and hit you right in the feels. Moonshine has allowed me to show my versatility as an actor. I believe season one will be a great reflection of the skills that I’ve had years to work on.

Seeing it all come together. Making a television is no easy feat. It takes a village to get everything done and on time. From the producers to the grips, there are no small roles. I think it will be surreal to turn on the television on September 14th and watch a series that I had the pleasure of working on.

Be patient. Thicken your skin. Never quit. Being an actor is tough. It’s full of a lot of ups and downs…mostly downs, uncertainty and close calls. If you stay committed and not complacent, good things will come. Just don’t expect it to happen without putting some work in.

Learning the business side of it all. As much as I do this for the love of the craft, we need money to live. I’m so grateful I learned things like, tax write-offs, incorporating, RRSPs, TSFAs etc. Not even just as an actor, I think these are important tools to learn regardless of your profession. Sadly, it’s not often part of the curriculum at school.

You’d have to ask them. I’d like to think they see me as kind, fun, warm and entertaining.

Laugh now, Cry later. I’m self-aware that from an early age, I used my ability to make people laugh as a sort of therapy. Instead of wallowing in the pain I’ve been through, I found comfort and joy in making others smile. As an adult, I’ve become aware of this and I think I’m overall a happier person because of it. Everyone has their issues, but I think the first step is being aware and addressing them.

The sky’s the limit! Possibly shooting the second season of Moonshine?? Maybe I am… maybe not. Time will tell.

Who likes healthy food?! I’m half joking. I think it would have to be kale. Love me a good kale salad.

Happiness is loving what you do, and loving the people around you. Humans are fragile creatures and I don’t think there is space in one’s life for negativity or people who bring you down. I’m lucky to have people around me who have always deep down believed in me and my success.

Jim Carrey. I love his work and he’s the reason I got into acting.

Social Media is a job within itself. Sometimes it sucks to see that you need a social media presence nowadays to be relevant in this business. I think like anything, it can be good in moderation.

Book: The Series of Unfortunate Events

Movie: The Star Wars Saga (any of them)