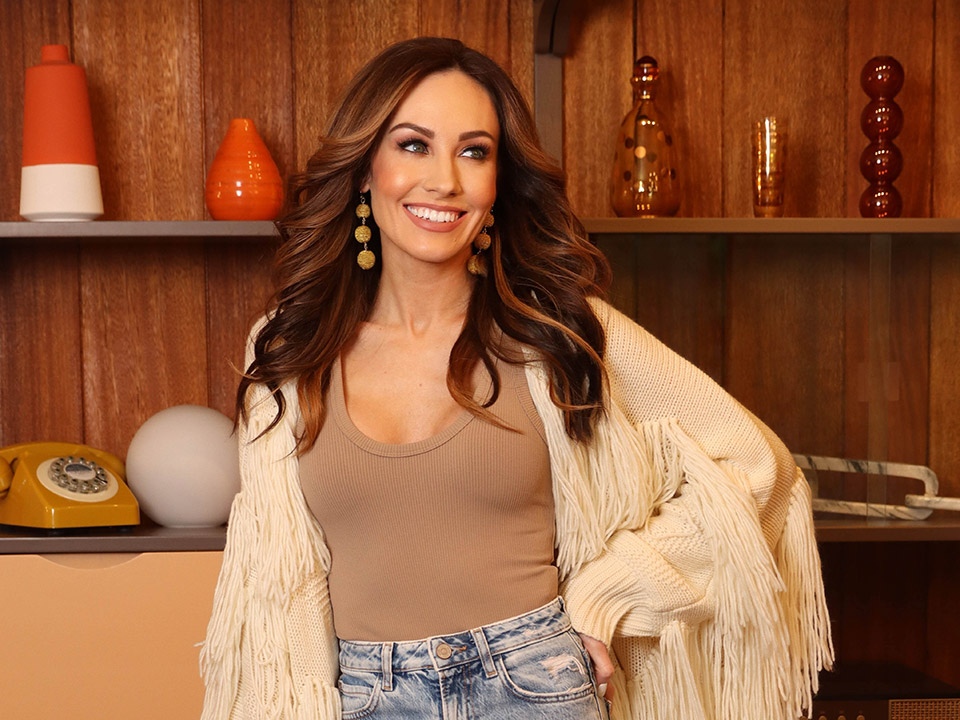 Check out our interview with actress and Dognapped: Hound for the Holidays star Kimberly Dawn Guerrero who can be seen starring as Victoria Frost. Her character is an egotistical social media influencer who wakes up one morning to find that her dog has been kidnapped overnight. In an effort to find the puppy before Christmas, Victoria’s long-suffering assistant Emily teams up with charming local vet James Conway. As the two investigate suspects, including a rival influencer, a crazed fan, and the father of a spoiled little rich girl, they form a romantic bond along the way – until she suspects her charming vet isn’t all he seems to be. 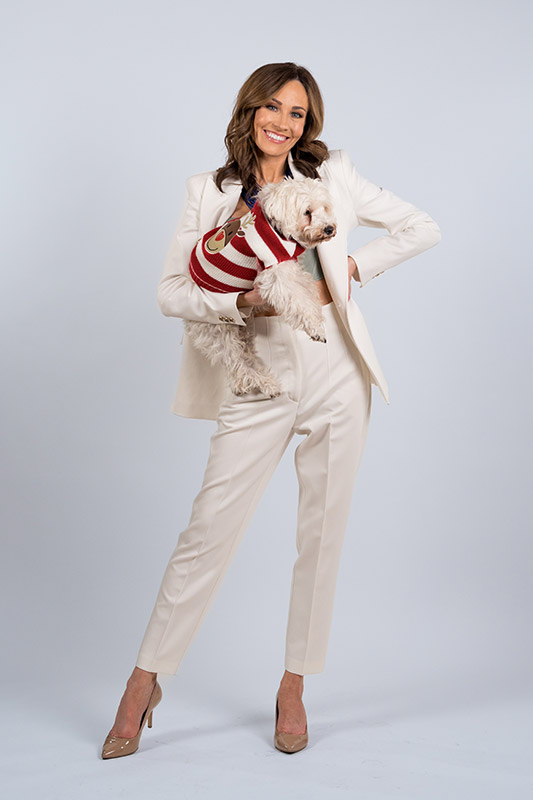 Hi Kimberly, please tell us a little about you?

I grew up in Tucson, AZ. I was definitely a kid that had my hand in everything entertainment growing up. If I wasn’t acting, I was singing, dancing, playing the piano, etc. I dreamt of starring on Broadway when I was young but after graduating, fate brought me out west and I ended up working in Film and TV. When I’m not acting there is a strong likelihood, you’ll find me with a packed suitcase as I have a huge passion for travel!

Believe it or not, I was actually a very introverted child so my Mom enrolled me in a dance class to help bring me out of my shell. The first time I stepped on a stage there was a light that clicked on and something that changed in me. I gained such an affinity for performing and spent my childhood dancing and singing in a children’s performing group. I booked my first professional voiceover job at 8 years old so I kind of grew up in the entertainment realm. Performing is where I have always felt most at home.

It’s shaped me into who I am a person and gave me the most incredible belief in myself.

The best part is being able to collaborate with other creatives who have such a passion for art and their craft. Also, I love that every project is a new adventure, no day looks the same. The worst part is learning how to navigate the no’s in this business and how to not take it personally. You won’t be right for every part and you’re not everyone’s taste and I’ve learned that this is still okay!

I read the script and then dive into the why’s in my character and what makes them behave a certain way. I love to find something I can pull from within myself or someone that I know to try and relate to the person I’m portraying.

Tell us about your work in highly-anticipated ION holiday movie “Dognapped: Hound for the Holidays?

Dognapped was such a fun Holiday film to be a part of. Is there anything better than a Holiday Movie mixed with a Dog story?!! The first time I read the role of Victoria I knew she was going to be such a fun character to portray. She is a bit ruthless and out of touch with reality but I saw so much comedy within the character and I knew she was going to be a fun one to bring to life.

I have been lucky to work on so many great genres of Television. From hit comedies to soap operas to dramas. I live for comedy and grew up performing in the Theater, so working on multi-cam sitcoms like 2 Broke girls and How I Met Your mother are at the top of the list. I love the energy a live audience brings to a great multi-cam production. It feels like the closest to performing on stage. 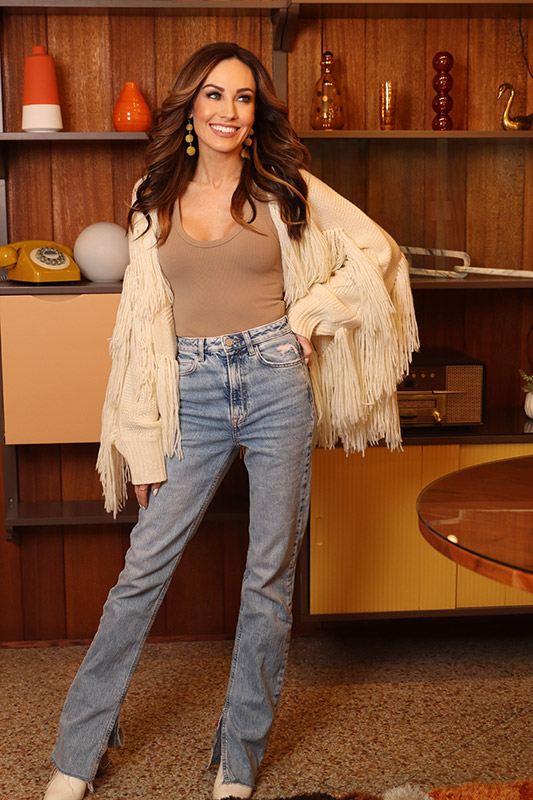 I love great comedy characters. I love characters that are a bit over-the-top or have a bit of a quirkiness to them.

Getting to bring a character to life and bring happiness to others. In a world that can seem very heavy at times, I love that there is a world in TV and film that you can go to escape. It was so fun being part of a Holiday film that I know brings so much joy to households this time of year.

You’re going to hear a lot of no’s on your way and that’s okay. Also never stop training and growing as an actor.

To really enjoy the process. The majority of your time as an actor is spent in auditions and I have learned to love it. I try to treat every audition as though I’m already doing a performance. That helps take off the pressure of booking a job and makes my work so much more enjoyable. I get to play with so many different characters. How fun is that?!?

A Disney Princess. Hahaha! I am such a Disney nerd. I have an annual pass and all my friends know I’m always down for a fun day at the Happiest Place on Earth!

Once upon a time and then something. I live for a great fairytale

I would tell my younger self that it’s okay to be a bit of a late bloomer and that your time will come. Also, If something’s meant for you it will never pass you by. If it’s not, it wasn’t yours to have in the first place.

A book about manifesting. I’m currently reading a book by Gabby Bernstein. I just finished reading it and have applied a lot of her advice and outlook into my daily routine.

The last months of 2022 involve a lot of travel. I just got back from a magical trip exploring Iceland and I am pretty much living out of a suitcase through the end of the year. I have another film in post-production and some fun things in 2023 that I can’t wait to soon share!

Dessert (I have such a sweet tooth and a particular weakness for chocolate. Oh, and churros)

Do what fulfills your soul

I would love to go back in time and have lunch with Betty White. I dream of a career with the longevity of hers and she was such a bright light in the comedy world that brought so much joy to television. I think we would get along great with our mutual admiration for animals and my love for rescuing dogs.

Always be early for a job, stay positive and work hard. All advice was from my grandpa who was the most positive person I’ve ever known in my life. He engrained that in my head at an early age.

I am huge animal lover and rescued a member of our family “James Dean” from the incredible dog rescue, Bichons and Buddies in Los Angeles. I think it is so important to adopt and not shop. There are so many dogs in need of a good home.

I love to manifest, so I’m going to say starring on a long running TV sitcom.

Rainbow by Kacey Musgrave. Love her music and the song.

I think social media can be used as an incredible platform but it can also take you away from enjoying the moment. I work on trying to find a healthy balance on what to share on social media and when you just need to turn it off and be in the present.

Book: Where the Crawdads Sing

Quote: The way to get started is to quit talking and begin doing. -Walt Disney

Sports Team: AZ Wildcat basketball. I grew up in Tucson and am a huge wildcat fan.