Hopkins is best known for his starring role as the voice of “Gumball” in the animated hit series The Amazing World of Gumball on Cartoon Network. He currently lends his voice to the DreamWorks Animation series Dragons: Rescue Riders, a spinoff of the fan-favorite franchise How to Train Your Dragon. The series follows Dak and Leila, twins raised by dragons who have developed a unique ability to communicate with them. As a result they help rescue dragons and the people in the town of Huttsgalor. Heplays Axel Finke, a charming and smooth-talking 13 year-old who forms a close bond with the twins. The cast also includes Marsai Martin and Skai Jackson. The series is streaming now on Netflix and his character is making a big splash in season 2. 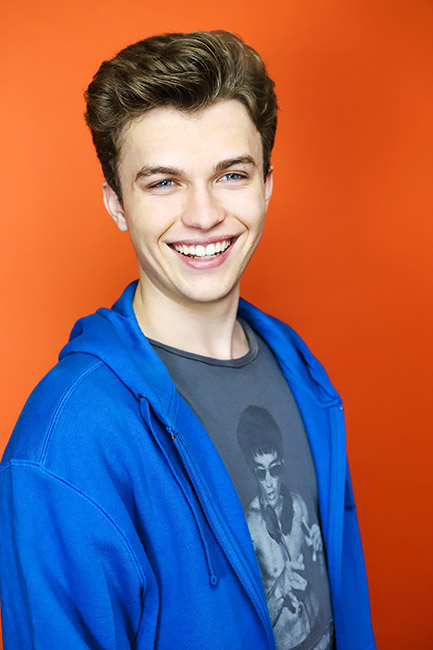 Hi Jacob, please tell us a little about yourself?

All of my passions are a reflection of who I am. I love Taekwondo because of how it disciplines me and teaches me how to be a man of honor, chivalry, courage, and mercy. I am presently close to a third degree black belt. I love drumming because of the emotional rhythm it provides. It’s a medium for me to express my inner self and relieve any tension. I love drawing because I get to express my creativity and allow people to see my thoughts. And of course, I love acting because I get to further express my creativity by becoming different characters and adding my own personal twist and flavor to them!

I started acting when I was about five years old. I was running errands with my dad, who at the time was also an actor, and we stopped to see his agents. They looked over their desks and saw little old me and asked, “Does he want to act?” Without hesitation, I jumped up and exclaimed, “Sure!…. what’s acting?” And the rest is history!

Any other family members is in the business?

Both my parents used to be actors (my dad more so than my mom, she was the dancer). When I first started acting, my parents were the ones to teach me the ropes, and I couldn’t be more grateful.

As a growing young man, I always looked up to my father. He’s the one who taught me how to be an actor and a respectable, chivalrous man.

Drawing, drumming, reading, and Taekwondo training are essentials for me (not to mention the occasional acting/voice acting).

I wouldn’t be anywhere without either of my parents. Both of them have been so loving and inspiring for me, and they’re the ones who’ve guided me and educated me throughout my career.

What was your first voice acting role?

At the age of 11, I booked Gumball Watterson on The Amazing World of Gumball.

Tell us about your work as the voice of Gumball in “The Amazing World of Gumball” on Cartoon Network?

Gumball will always be my favorite role. It taught me everything I know about voice acting today. I learned how to speak clearly and properly, perform solely through my voice, widen my vocal range and tone, and I vastly improved the quality of my acting in general. The recording process of TAWOG was very unique. Since the show was created in London, the majority of the crew was based in London. So, when I would step into the sound booth, I’d be Skyping with my voice director (Richard Overall) and I’d have my sound engineer, Greg Hall, to the right of me in person.

I voice Axel Finke on Dragons: Rescue Runts- I mean Riders. Axel is like the Deadpool/Starlord of Huttsgalor- he’s a little bit of good, little bit of bad, and a little bit of both. Although he sides with his evil genius uncle, Magnus Finke, he always seems to have his own agenda, whether it be dastardly or heroic. Voicing Axel takes a lot of clear enunciation due to how cunning and intelligent he is. He’s a con artist, which requires a seemingly charming tone with a sly undertone, which is super fun to play. I also get to record with the legendary Mary E. McGlynn (one of the best voice directors I’ve ever had).

Do you get nervous doing the voice over?

Not at all! Voice over is something that I genuinely enjoy. Even when I first started, I was never nervous, but more so excited!

How do you take care of your voice?

I learned a variety of vocal warm-ups, vocal techniques as well as breathing techniques from my singing coach early on in my voice over career. I continue to practice those and do them prior to my voice over sessions. I also take time to warm up my vocal cords prior to voice over auditions. It all must come from your diaphragm, as well as keeping an upright posture to further boost your performance. Of course, warm tea and room temperature water will keep your vocal cords warm, moistened, and ready for action.

Always practice expanding your vocal range, timing, diction, tone. If you can find a good singing coach, I really recommend it. Practice tongue twisters, scales, and learn breathing techniques. Research some voice over classes and/or workshops in your area.

Now on the acting side, tell us about your work on ABC’s hit show “The Goldbergs?”

Since 2013, I’ve played Chad Kremp on The Goldbergs. Chad is Adam’s preppy but cool (and a bit nerdy) best friend. They’re always filming home movies together and getting into trouble (even though Chad is the voice of reason of the two, he always gets sucked into the hijinks). There are always interesting pieces of 80’s nostalgia storylines that I get to be a part of whether it’s Tron, Star Wars, The Goonies, or Beverly’s Cookbook – the fun never ends!

I actually have a movie coming out later this year called Carolina’s Calling, a film directed by Michael Saquella. I play Zack, a cool, confident kid who falls in love with Jessie (played by Savanah Moss), the daughter of Martin (Antonio Sabato Jr.). In 2011, I played Alexander Drew on True Blood, the most powerful and evil vampire on the Vampire Authority who happens to be trapped in a nine-year old’s body. As for voice over, I’ve played Boot Crew Drew on Cartoon Network’s We Bare Bears and Andrew on Nickelodeon’s The Loud House.

As I previously mentioned, Carolina’s Calling is going to be coming out later this year! I also have more episodes of The Goldbergs on the way, so be sure to keep an eye out for Chad Kremp! You can always catch Season 2 of Dragons: Rescue Riders on Netflix and stay tuned for Season 3.

My favorite actor is Jack Nicholson. He’s such an iconic legend and a phenomenal actor. He’s extremely confident and knows how good he is, and carries himself with such coolness and ease (not to mention I’m a huge The Shining fan). My favorite actress is Evangeline Lilly. She is incredibly talented (go watch ABC’s Lost right now), and I very much admire her skill and flawless acting.

Well, a lead in an anime series and superhero role in an MCU movie doesn’t sound too bad…

Isaac Asimov’s The Foundation series. If you love sci-fi as much as I do, I highly recommend this utopian robot read.

Garlic herb chicken. I literally can’t live without it.

I don’t think pistachios are a cheat food, but that’s what I’ll snack on.

Tokyo, Japan and with who…not sure yet.

My great grandfather, Grandpa Haught. I’ve heard many great and inspiring stories about him, and I’d love to finally meet him.

I mostly practice digital art, train in Taekwondo, or play my drums. I really love refining my skills and passions; I want to be the best version of myself. I also love spending time with my family.

The Office, Spongebob, and 1950’s movies. Here’s lookin’ at you, kid… Oh and I’m presently watching the second season of Twin Peaks.

I already have perfect Sundays: church, lunch, and the evening with my family. Can’t get any better than that.

I’ve been a Celebrity Ambassador for The Jonathan Foundation for seven years now! I’ve always cherished working with them because their mission is incredibly important to the future of education systems. The Jonathan Foundation works with families and individuals affected by learning disabilities and special needs (including behavioral/emotional/physical/cognitive needs) to obtain the proper assessments, IEP’s, and educational placement that will help them reach their true potential. Unfortunately, children and youth with learning disabilities and special needs are often neglected in schools, which is exactly why The Jonathan Foundation exists. Raja Marhaba, the Founder, strives endlessly to not only get the best education for these children, but make a difference in school districts so they’ll never get left behind. I also donate my time to Lollipop Theater, which provides movies, the arts and days of entertainment to terminally ill children. One of my favorite events that they hold is their annual Superhero Walk, where children get to make their own superhero costumes and have a superhero themed walk, starring them!

My crucifix necklace, Nintendo Switch, and katana… which I don’t actually bring with me but it would be cool if I could.

I think social media must be used responsibly, or else it could be detrimental to your health. The only reasons I use social media is to reach out to my fanbase and stay in touch with my friends. There are many people out there who become obsessed with what random people they don’t even know think about them, which can critically damage your self-respect and integrity. I think that people who use social media need to have passions in their lives which they can grow from. Personally, for me, those passions are martial arts, drawing, and drumming. These passions bring me more happiness than any social media platform could ever offer.

Quote: “If you want to sell yourself, you have to be good at what you do. And you have to know you’re good.” – Dan Avidan

Song: A tie between “Of All the Gin Joints in All the World” by Fall Out Boy and “Higher Ground” by Sumika. Oh, and “Rio” by Duran Duran. Don’t do this to me, this is hard.