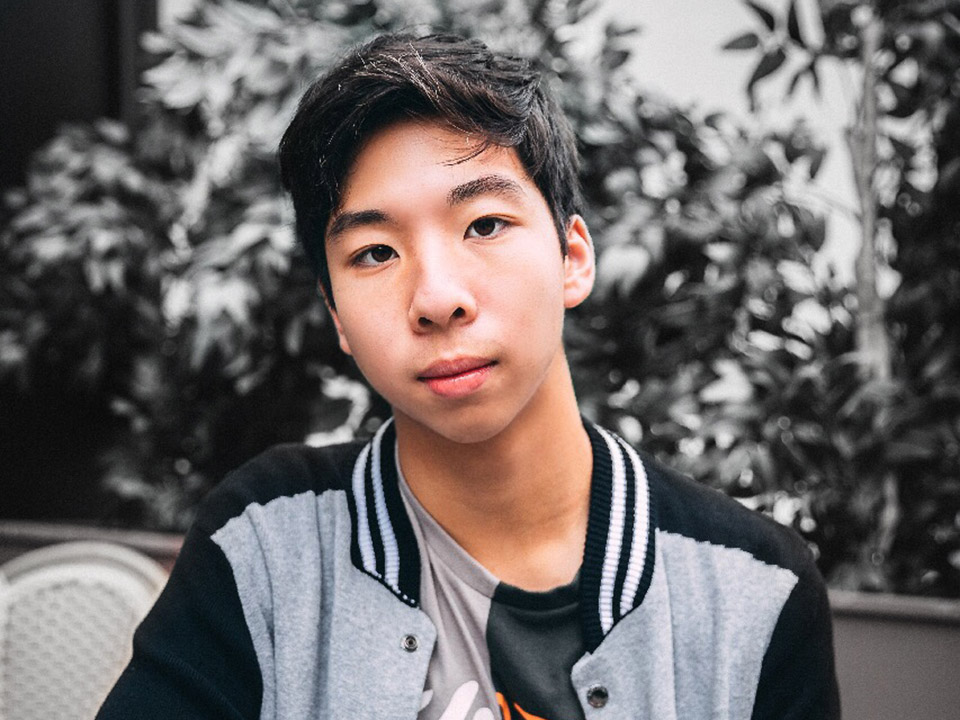 In June of 2015, he released his debut EP, called the Royal EP, which consisted of five songs, and contained Ready to Rumble. Since then, he continued to show the love and passion by producing a new EP which came out on December 10, 2015. Then released his third EP on March 19, 2017, with vocals featuring singers like Three Guests, Ruben Hultman, HTHaze, Jared Halley, and more! With more than 250K followers on Tik Tok alone, 10K on Snapchat, 60K followers on a brand new live streaming app called Live.Me, and over 52K followers on Instagram.

He is consistently on ReverbNation’s Top 10 EDM producer chart and have been recognized on Shazam and Global DJ Rankings. In addition, in late 2015, he started his own active online radio show called “The OffRoad Radio,” in which he showcased new and rising music artists and producers.

Hi Dylan, please tell us a little about you?

I am a seventeen-year-old emerging music artist that goes by the stagename of Rodin’ Flash. I sing and produce mainstream EDM music using Ableton Live, and I am also an aspiring actor with plans to breakout in the entertainment industry. In June of 2015, I released my debut EP, called the Royal EP, which consisted of five songs, and contained Ready to Rumble. Since then, I continued to show my love and passion by producing a new EP which came out on December 10, 2015. I released my third EP on March 19, 2017, with vocals featuring singers like Three Guests, Ruben Hultman, HTHaze, Jared Halley, and more! With 250K followers on Tik Tok alone, 10K on Snapchat, 60K followers on a brand new live streaming app called Live.Me, and over 52K followers on Instagram, I am a multi-talented artist. I am consistently on ReverbNation’s Top 10 EDM producer chart and have been recognized on Shazam and Global DJ Rankings. In late 2015, I started my own active online radio show called “The OffRoad Radio,” in which I showcased new and rising music artists and producers. The station functioned as part of my record label that gave new artists the opportunity to release their songs on major online platforms, including but not limited to iTunes, Bandcamp, Spotify, Google Play, Amazon, and even more. Some of my brand deals and companies I have worked with include Popular Demand, Daniel Wellington, Vapor, Level State, Goatcase, Johnny Cupcakes, Popular Poison, and more. Early January, I performed in Chicago alongside many other social media talent, including Kristen Hancher, Raegan Beast, Mikey Barone, Taylor Holder, Halia Beamer, Jordyn Jones, Beyond Brandon, Jaxson Anderson, Jackson Krecioch, Tyler Brown, Bryce Hall, and more. Since then, I have performed in numerous other venues for many tours around the nation, alongside talent like Jonas Bridges, Flamingeos, Mario Selman, 99 Goonsquad, Case Walker, and many others. I am currently working on my debut hip hop album.

It’s funny because a year before I started producing, I didn’t even listen to music! What a sad life that was!! Anyways, I was packing to take a road trip to Los Angeles, and I was trying to figure out how I could occupy my time during the seven hour road trip. It was summer before fifth grade so there was no homework. My brother told me about a software called Logic Pro X, so I downloaded that on my computer. I spent the entire car ride just playing around with the different sounds and samples on Logic, but I sucked at it. That’s basically my first time I ever heard about EDM or even produced a song. I remember I was so proud of my work I made a SoundCloud the same day. In regards to social media, Musical.ly was the first platform I joined, and I started that on July 15, 2016. It was crazy because a week later I already had 12K followers on there! I’ve worked up since then!!

Hopefully! If they didn’t, I didn’t know about it! Lol no both my parents are super supportive. My dad brings me to any photo shoots or events I need to go to and my mom helps arrange my schedule when necessary.

I started off by playing classical piano at the age of five and guitar at the age of 11. I also had music class in elementary school, and I’ve taken singing lessons.

Where the name Rodin’ Flash comes from?

I played a lot of Minecraft when I was younger. My gamertag was Rodin’ Flash because I wanted to make a play on word with the in-game item, rotten flesh. I kept that name for my music and haven’t changed it since.

Tell us about your hit “Success vs. Regret?”

“Success vs Regret” was the first time I actually dived into mainstream EDM with vocals. Previously, I had done electro house and a few other electronic music genres; however, this EP was a giant leap for me in terms of my style. I love the way it turned out and I love all the vocalists that hopped on the album.

Tell us the feeling of have your successful work featured all over Social Media?

It’s incredible and unbelievable whenever people listen to music. The fact that people take the time to hear what I’ve spent hours and hours on is crazy.

What is next in the EDM business for the next 5 years?

Music is always changing. Right now, EDM is dominating the top 40 charts; however, it’s one of the newer genres. With trailblazers and pioneers like The Chainsmokers, Diplo, Armin Van Buuren, Marshmello, and Skrillex to name a few, I don’t see EDM leaving the radio anytime soon.

Tell us about your radio show “The OffRoad Radio?”

Yes! I created The OffRoad Radio when I was younger as a way to help small and up-and-coming musicians show their talent to a wider audience. I want to help others, and this was my way of helping give a platform for other musicians to show their talent. While this is on a bit of a hiatus because I am focusing on my own music right now, I plan on relaunching it in the near future.

Since I’m involved in multiple genres I have a wide range of influences. For production, The Chainsmokers, Martin Garrix, Jon Bellion. For rapping, NF, Jake Miller, Witt Lowry, and Sik World.

I don’t want to be defined as a social media singer and producer. I would like to branch out and get more involved in the music industry.

Happiness is doing what you love with people you love.

“Keep all your money in your mattress” – Cole Gurtner, my classmate. I asked him for the best advice he could give me as I was answering this question.

While I do not get nervous before a performance, I do start to get nervous when I am on stage with hundreds of fans starting at me. But that’s crazy that so many people are there to see me! I just need to have more fun on stage lol!

New music, hopefully a new album even! I’m also planning a few shows towards the end of 2019.

Put yourself out there. People won’t know who you are if you don’t have anything up. Whether you get zero views in the beginning, just keep pursuing your passion!

I love being an entrepreneur and I have invested time in so many other hobbies and sports; however, as a career path, I think I would be doing something related to fashion, technology, or even the stock market. I’ve tried investing in the stock market before and it’s so fun! Maybe I could even combine all three!

Despite what you may have thought from my cooking healthy food video on YouTube, I am a very good chef and can cook anything from steak to pancakes to poached eggs.

How about a month long vacation, stopping by Italy, Sweden, Ukraine, Australia, and Kazakhstan to name a few stops? Arguably the best stops in the eastern hemisphere. If we could add the Bahamas to that list too that would be awesome! I’d love to go there with my friends!

Michael Jackson is the king of pop. He was such an inspiration to so many people, and unfortunately, i never got the chance to meet him while he was alive.

Healthy mac and cheese? Does that work?

If the person smells bad and has a bad sense of style.

My dream is to sell out an arena tour with my best friends.

Any day that I am able to work on my music, hang out with my friends, meet some fans, and relax is perfect for me! Simplicity.

Yes! Giving back is one of the most important things for me, and I have been taught to give back to my community at an early age. From donating to WWF, teaching kids of the less fortunate, helping sort food for food banks, I’ve done a ton of different things for charities. Right now, I am planning a charity music concert with all the proceeds going towards schools without a music program (or an underdeveloped music program).

I am close to finished with my upcoming album called Chapter One! That’s all I can say for now, but I am super stoked to show everyone what I’ve been working on for a while now.

I think fashion is key to identity. Each person has their own sense of style that is unique to them, and I think that that it is so cool. No matter if you get inspiration from other people, everyone develops their own fashion sense.

Typically I like to stay trendy and a bit formal as well. Typically you’d see me wearing sweat pants with a polo shirt and a sweater or sweatshirt on top. My style isn’t complete without mismatched socks, which nobody knows haha because I wear pants, but that’s not because of style purposes. For some reason, all my socks in my closet are missing the other half. When I’m not wearing a polo shirt, it’s because I’m wearing a nice t-shirt from brands like Givenchy, Gucci, or Off White.

Social media has done so much to help benefit my music career. It has allowed me to promote my music and has connected me with so many people who have a similar mindset to me. I believe that if social media did not exist, I’d still be an ordinary kid in school.

All the other social media platforms I am on can be found by going to my website: rodinflash.com

Quote: “Dream Big Until You’re Too Dizzy.” I came up with that, and it’s been my own motto since I started social media.

Movie: Expelled (with Cameron Dallas) or The Greatest Showman