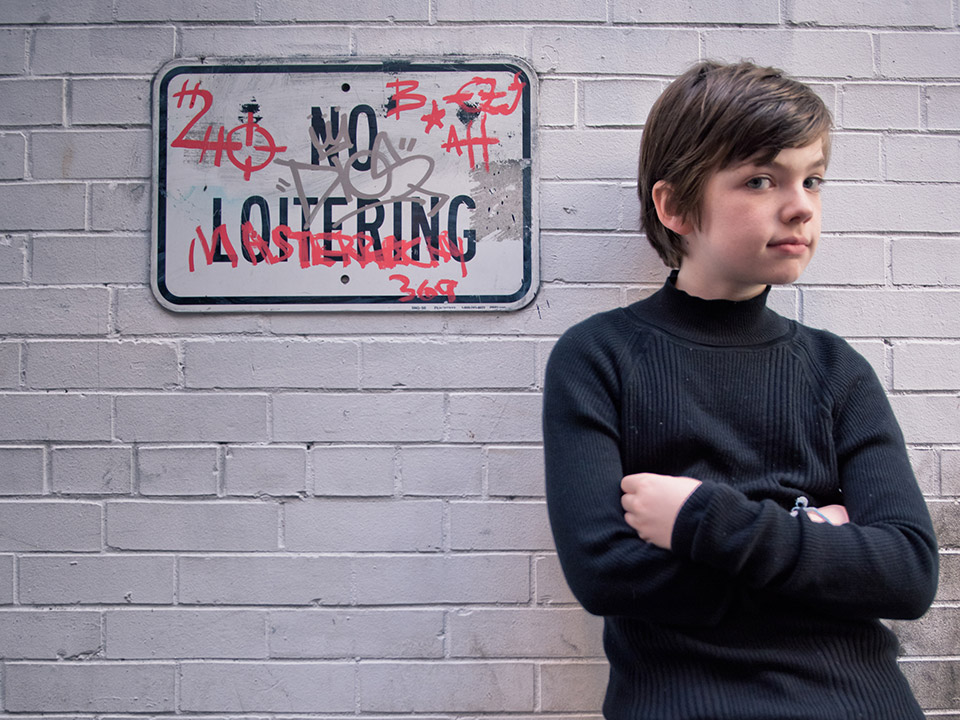 Check out our interview with actor Maxim Swinton who can be seen starring as Solly Fleishman in the upcoming FX limited series “Fleishman Is in Trouble” alongside Jesse Eisenberg, Claire Danes, Christian Slater, and Lizzy Caplan. Based on the 2019 novel by Taffy Brodesser-Akner, the series follows a Manhattan couple; Toby Fleishman (Eisenberg) and Rachel (Danes) who have recently gone through a messy divorce. When Rachel disappears without notice, Toby must figure out how to balance raising the kids, dating again, and his career. Maxim shines as Solly, one of the Fleishman’s precocious children.

In film, Maxim appears opposite Ewan McGregor and Ethan Hawke in “Raymond and Ray” for Apple TV+. The film premiered at the 2022 Toronto International Film Festival and tells the story of the two half-brothers, played by McGregor and Hawke, respectively. When the duo’s terrible father passes away, they discover a chance to fully reinvent themselves, and escape his ever-present looming shadow that the duo had lived under their whole lives. My mom is an actor – and one day she took me to a Huggies audition when I was a tiny little kid and I have been doing this since!

I get to miss some school
I get to meet a lot of interesting people outside of my everyday life
I get to learn a lot of things from where I get to go for projects, or to prepare for projects – for example, I got to go to the Natural History Museum in New York myself (plus the crew…) for a day of shooting of Fleishman Is In Trouble!

Best: get Pirate’s Booty from Crafty
Worst: I have to miss some classes at school that I really like

Research the project: I read the script – I read it with my mom. We spend A LOT of time with the script. Often much more than I want to 🙂 We try to understand what every word means and why it’s there.

I try to find out more about the story and the character and the place where the character lives and the time and place the story is set. For example, we had to learn about PT Barnum so we went to the Ripley’s Believe it or Not museum in New York to see the crazy kinds of things they had put together. For a story that took place in 1918 we learned about the Spanish Flu and how many issues were the same then as they have been now during COVID.

For another audition I learned about King Arthur and the Knights of the Round Table.

Tell us about your work in FX’s limited series “Fleishman Is in Trouble?” And about your role as Solly Fleishman?

The show is about parents getting a divorce and how they and their children deal with it – especially when the mom disappears. Solly is a shy kid who always brings light in dark times – like when he hugs his sister when they find out their mom hasn’t come to get them, or when Solly persuades his sister that Corn Chex is really a delicious cereal.

Now tell us about working alongside Ewan McGregor and Ethan Hawke in “Raymond and Ray” for Apple TV+? That’s amazing!

I learned a lot from them. I learned from Ethan that you should voice your opinions on the set when you have ideas about how to make the scene better, as long as they don’t offend someone.

Ewan travels light. He would come to set with only his sides and a coffee mug. And he loved staying informed about the news. He was always very kind to everyone on the set.

I have been lucky to get to work on many projects. Last year I got to work on a pilot of a comedy called “Adopted” – it was a story about a special forces soldier who returns to his parents in Texas who adopted a Russian orphan while he was away. It was based on a true story of Shawn Vance’s family. I got to play the orphan. I loved working in California and it was very fun to work with Daril Fannin – the co-author, Shawn, the creator, showrunner and lead actor, Mark Buckland – the director and an amazing cast including Bruce Campbell and the whole production team! I was sorry that the show did not go to series. It was a great show!

I would like to play Spiderman because Spiderman gets to do all these cool stunts like swinging across the sky.

Seeing myself on the screen and seeing that all the work hasn’t gone to waste.
When I do my stand up or I sing I love making people laugh or making people happy.

I got great advice from Normal Lear – I asked him what advice he had for me as a young actor. He said he lived by two words: “Over” and “Next.” I have followed his advice. They should too.

Always voice your thoughts, but respectfully. Take risks in your auditions, it is what will help you get the part!

“The kid who likes playing the stock market game” – because I am currently on the leaderboard in a stock market competition I am a part of. I find stocks interesting. I would like to be a successful investor.

How The Stock Market Works: A Beginner’s Guide to Investment by Michael Becket – I have read it and it’s very good!

Back to performing standup in New York comedy clubs this Fall!

New TV show booked for the Spring of 2023 – wait to see the news on that one soon!
Releasing music! My EP “Songs That Make Me Happy” is out on Apple, Spotify, Amazon, etc. Please listen! I recorded New York State of Mind with Billy Joel’s incredible saxophonist – Richie Cannata, Your Song, Fly Me To The Moon, Change is Gonna Come and If It’s Magic.

Having hot cocoa by a fire and watching a Christmas movie with my family.

Albert Einstein – I want to ask him how he managed to keep his hair so large, and then would ask him to explain relativity to me so I really understand it

Youngest member of the SNL cast ever!

It’s a place where I can watch some cool people do cool things!