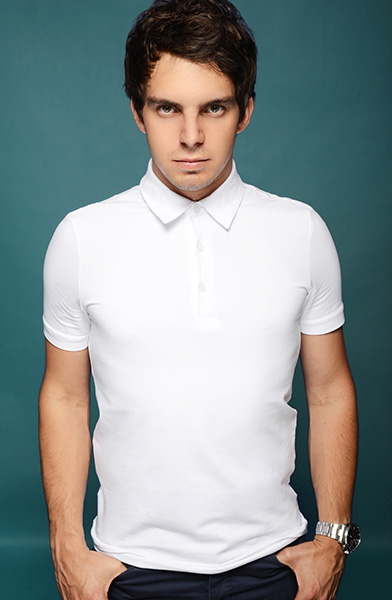 Since his discovery in 2006, French DJ/Producer Arno Cost has quickly moulded his reputation as one of the scenes most promising young talents. With his musical sensibilities residing within the realms of electronica, disco and house, Arnos’ production and remix work has attracted praise from some of dance music’s most formidable figures, including David Guetta, Axwell, Avicii, Tiesto, Pete Tong or Sebastian Ingrosso just to name a few.

Arno Cost’s talent stemmed from his parents keen interest in exposing him to music from an early age. Brought up on a diet of pop music, Italo-Disco and later, the innovations of the seminal ‘French Touch’ such as Daft Punk, Arno’s appreciation turned into creation as he took his hand to production in 1999.

Fast forward to January 2006 and the fruits of Arno’s labour paid off after being signed to Serial Records in France. The same year, Arno also drops a remix of Greyster’s ‘Under the Fuse of Love’, which was immediately picked up by Pete Tong and entered the UK Club Charts at no.2, remaining a favourite for many weeks. The rest of 2006 was spent making remixes for the likes of Antoine Clamaran, David Guetta, Laidback Luke and pushing his own solo production ventures on imprints such as Cr2 and Kontor.

Arno’s name was lavished with a great deal more attention in 2006 following the release of his first smash hit, the elegantly crafted ‘Magenta’ which he composed alongside Arias. Pete Tong and Axwell adoration of the track was no secret, and with an arresting rework from Dave Spoon, ‘Magenta’ became something of a DJs secret weapon the world over. It was in fact the most played tune at The Amsterdam Dance Event that year. Arno’s next Cr2 release was 2007’s ‘Apocalypse’ with Norman Doray. A heady concoction of sweeping composition and thumping house rhythms, the single was a favourite with Eric Prydz and Steve Angello and was given a tough rework by Sebastian Leger. With no doubt as to the potency of Arno’s partnership with production buddy Norman Doray, the status as France’s answer to the Swedish House Mafia is one increasingly linked to the Parisian contingent. Arno has been called on to remix a lot of artists like Moby, Zoo Brazil, David Guetta and Laidback Luke once again.

In 2008, Arno released electronic smash ‘Souvenir’ and ‘Golden Walls’, a collaboration with Sweden’s John Dahlback. Both received glowing reports and support from the likes of Axwell and Steve Angello. Arno’s status as a major international DJ is gaining serious momentum having played shows at The Sydney Freedom Dance Festival and a Cr2 night at Matter in London. Most notably in late 2008, the famous radio station RADIO FG chose Arno to mix its new compilation CLUB FG.

Over the past few years, keeping a busy schedule and touring all over the world, Arno Cost has kept on delivering quality music. His tracks “Cyan” (Cr2), “Lise” (Refune), “Lifetime” (Spinnin), “Head Up” (Size) and more recently, “NightVenture” (Size) show Arno’s abilty to produce different kinds of music and bring along heavy doses of melodic vibes and peak-time moments.

Arno is a man who is increasingly in demand and with the additional creative outlet of The Freshmakers at his disposal, his talent are now a source of acute excitement amongst DJs, producers and house music revellers alike.

Do you think the French house music scene still has a really strong influence on your style? And what music did you grow up listening to and is that an influence now?

Yes for sure. I am mostly inspired from the French Touch. When i was a kid i listened to Daft Punk, Bob Sinclar, Phoenix, Air, Cassius etc…

I aslo really like Eric Prydz and Deadmau5 stuff. But i think it’s important to be very open minded…I take my inspiration from a lot of genres, from downtempo (Moby, Portishead to pop rock music (Serges Gainsbourg, Coldplay, Muse etc…)

How do you compare playing in your home country to playing in the rest of the world?

It all started in France, so my fans over there know me best. French people also recognise my first tracks, so that’s really cool. Beside that I have the feeling that french folks more love the disco and big room house rather then the hard EDM.

What’s it like playing ‘Fuck Me I’m Famous’ at Pacha?

First of all I love playing in Ibiza. This Island gives me so much energy and inspiration. David’s FMIF party are one of the most well known parties of Ibiza so it’s an honour to play there. Everytime I play at FMIF there is a good vibe, and it seems like everybody really enjoys Ibiza to the fullest.

What do you think about David Guetta?

David has been a great inspiration for me. I have a lot of respect for what he has reached so far and how he builded his career.

Most DJ/Producers nowadays are so caught up in the fame. How important are your fans to you?

Very important! I appreciate every single fan, as they have become an important medium for a dj/producer to spread the word about your music. Especially now everybody is really active on social media.

Today everyone is a DJ/ Producer, and we sure you know how difficult it can be to get your work noticed, what advice would you give to upcoming DJ/Producers?

Make sure your music is unique and create an own style. Try to be different then what is already out on the market.

Do you prefer DJing or producing songs?

That’s a though question. I like to produce music, create new content and spend hours in the studio, but it’s also really cool to see people go totally crazy when they hear my music when I play.

What is the best part of life as a deejay?

It gives you a satisfied feeling when people dance to music you have produced. 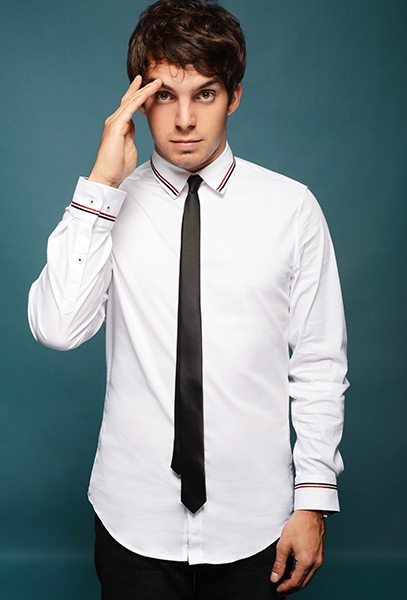 And what is the worst part about DJing?

I don’t really like all the traveling. I think it’s a waste of time to be at airports and in airplanes for hours. Time is precious! Beside that it’s not always comfortable. But I can’t complain about it, it’s part of the job!

What has been your best show this year?

Light in Las Vegas with Nicky Romero. It was EDC week end and bloody packed!

The people were jumping everywhere, sending me love. I had such a great time !!

You have had a few releases on Steve Angello’s Size records. What’s your feeling on that?

I think Size is a great label and platform for producers and dj’s. Steve Angello is a real visionair, he is building a professional team around him, that handle his label with great care. Although I really appreciate Size Records and love what they’ve done for me so fat, after three releases I feel I should look into releasing on some other labels coming year. 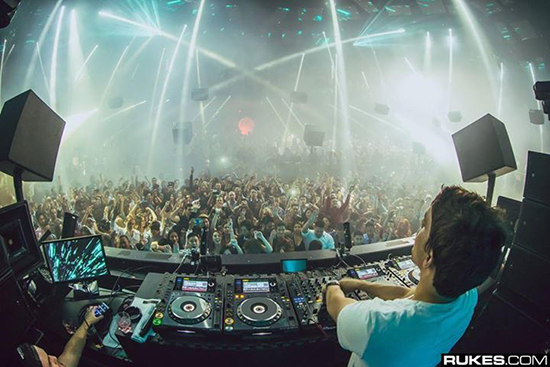 Strong is your latest production with Norman Doray. What was the thought process while creating Strong?

Norman came in my studio in Paris last year and we started working on a loop. Then this synth loop came out. We were like « wow this is really catchy » so we finished the record within a week. We had to find a good vocal and I had this one which was supposed to be on another record. We tried with Strong, and it fit perfectly !!

What’s it like working with Norman and have you guys considered teaming up under an alias to form a duo?

I know Norman for almost 10 years now, and he is one of my best friends. I really enjoy working with him. He is a talented guy and he has a lot of experience. We did consider it, but it takes a lot of time to build on a new name. We think we first should keep on building our own brands and focus on our own careers. Maybe when our names are bigger we can consider starting a duo under an alias :).

At what point in your life did you realize you wanted a career in music and how did you end up in Electronic Music?

I started making music early (around 14) so I spent all my free time in my bedroom making some beats. Later, around 18, I went to the medicine school but realised it was definitely not for me. I missed music too much and I couldn’t handle both, so I quit medicine to focus on my musical career. One year later, I was releasing my first EP and started touring the world as a DJ !

Tell us a little more about who Arno Cost is on a non-musical front?

Im a big fan of cinema. i watch movies all the time so why not a director or this kind of stuff ! When I dont make music, I play a lot of chess, poker or go out with friends or family. I guess it’s important to have a proper social life and not think about music all the time.

Do you make music only on a computer?

Yes, I produce in Fruity Loops. At the moment I don’t have a lot of hardware, I almost do everything with plug-ins, it works great for me!

If your weren’t a DJ what would you be?

I would have studied medicines. So I probably would be a pharmacist or doctor.

Any last messages for our readers?

I want to thank everyone who believes in me and supports my music! 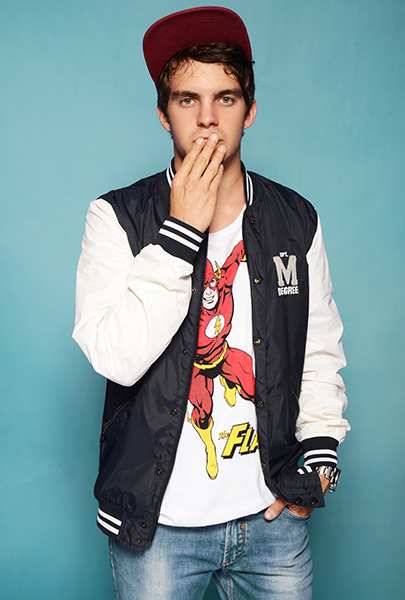