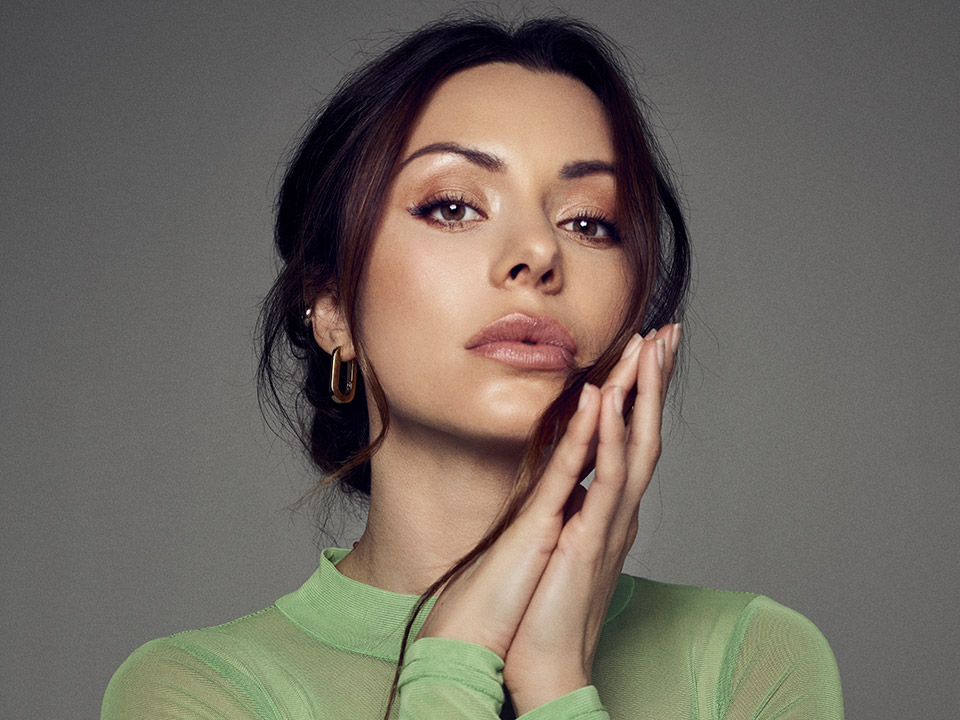 Check out our interview with gorgeous model and actress Neraida Bega who can be seen in the lead role of the new APEX Legends: Escape as Ash.

Ash is the game’s first playable character to make the jump from Titanfall 2. The simulacrum assassin and overseer of the Arenas is ready to cut through the competition and put them in their place. The game, published by Electronic Arts, has over 300 million players worldwide and is available on PlayStation 4, PlayStation 5, Xbox One, Xbox Series X|S, Nintendo Switch, and PC via Origin and Steam. Bega uses her skills in martial arts (trained by 7-time World Forms & Weapons Champion, Mike Chat) and her tutelage by Hollywood’s most infamous tactical trainer, Taran Butler, in technical shooting to personify the character and give her accurate movements within the game. 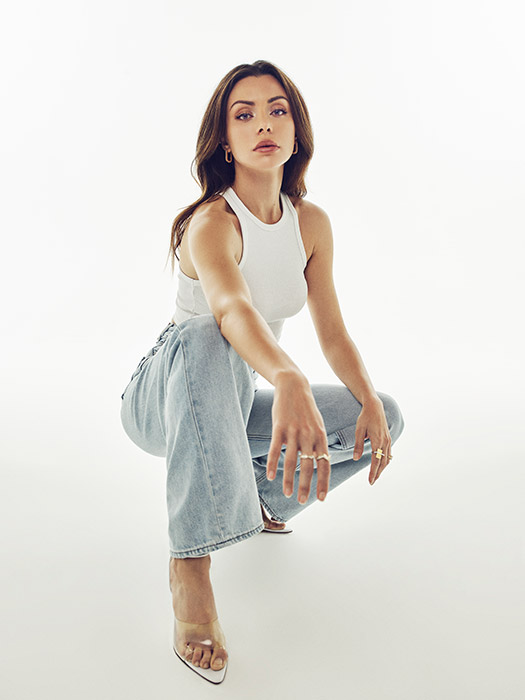 Hi Neraida, please tell us a little about you?

I spent the first half of my childhood in Albania, before immigrating to Italy. After 50 years of communism, came the Albanian Civil War in 1997. My childhood overlapped this period where I was separated from my mother while fleeing the country with my father and sister. After the civil war, my parents went back and forth from Italy to Albania often leaving me and my sister Eneida in order to provide a better life for us. I grew up in Italy, working many types of jobs starting at age 15. I was working as a dental technician before moving to the United States. I speak 4 languages – Italian, Albania, Spanish and English and I love playing the piano.

I grew up with a family full of artists, actors and musicians. I started playing piano, violin and performing music on stage in front of audiences when I was 5. I always enjoyed the feeling that came with it.

However, I also loved anime and the best part for me was the martial arts. I loved all the action! I remember watching tons of anime, action movies, superhero Marvel/DC films, The Matrix, James Bond films, etc. and I would start dreaming and imagining myself in these TV shows and movies. I always felt like I belonged there. I was so in awe.

My acting career officially started when I moved to Los Angeles!!! I am forever grateful that the United States provided me with an O-1B Entertainment visa which opened the doors for me to live here and pursue this career. It’s a huge privilege for me to be living here as America has so much to offer.

The best part is being able to be many different types of people. I’m easily bored but with acting, I’m always doing something new and different and that’s the best part! I wouldn’t say this is the worst part but a difficult part of being an actress is managing the emotional stress that arises from pursuing this business and dealing with rejection in the audition process.

I don’t have one way of preparing. It is always dependent on the role. For me, practicing and rehearsing every day is very important. I reorganize my entire schedule so I can dedicate most of the time to preparing for the role at hand.

Tell us about your work on new APEX Legends: Escape? And about your lead role as Ash?
I was cast to play the new Legends character Ash! Ash is Apex Legends, the 19th playable character and she features a highly aggressive set of abilities that players can use in a match. Her abilities include throwing a spinning snare that tethers players and being able to warp across the map towards enemies; she also wields a sword in a variety of her animations. It was perfect for me because swords are my specialty and it was really cool being part of the character creation and doing all the motion capture for Ash! 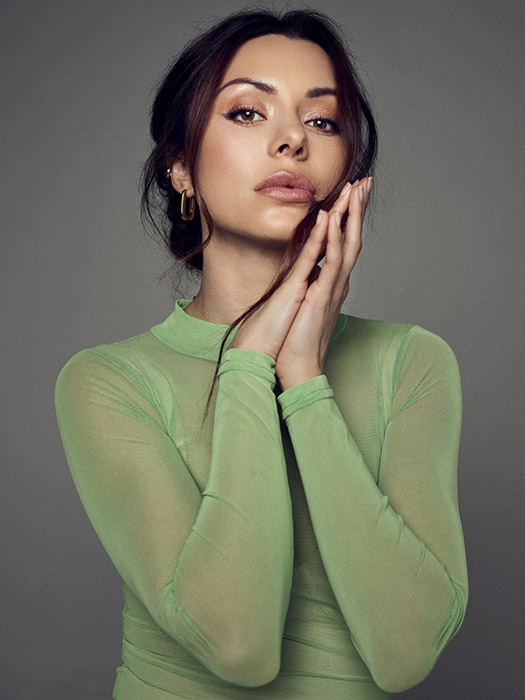 What projects have you been part of?

The readers can go to www.imdb.com and search my name to see all the projects I’ve done!

My goal is to produce great work and to work consistently. I would also like to be an action star and do big box office movies! I want to do a lot! More action tv shows and films like Marvel or DC, and franchises like The Matrix, Mission Impossible, James Bond, etc! I also like real life stories and would love to do a biopic film on a really interesting person.

Acting. Getting to act. Everything about acting. I get to read a lot and learn about so many different stories. I also enjoy learning new skills for a role.

If you really want to pursue this career then you have to take it seriously and commit 100% to it. Not half way or 90% but 100%. Work hard for it, learn as much as possible about the craft and the industry. Enjoy it and love the process. Don’t listen to the naysayers.

Failure is part of the process. I’ve learned to see it as a positive and a great learning tool. I realize how strong and capable I become every time I work towards overcoming my failures. The important lesson is that I don’t let failure stop me.

When I’m on set working, I’m extremely focused. I’m there to do my job. The most important thing for me to do while shooting is to be 100% prepared and deliver great performances.

Which magazine or project is still on your bucket list?

Vanity Fair, Vogue, GQ. Projects on my bucket list? There are so many! I would really love to work with Denzel Washington!

You are followed by so many young fans. How do you feel about that pressure of doing always the right thing, and encourage people to follow their dreams?

First of all, I don’t always do the right thing, I make many mistakes. I do put pressure on myself to do the right thing, so I focus on leading by example to inspire the younger generation who follow me. I’m sure I will make more mistakes in the future but I will learn and grow from them and help to educate others to do better.

You must BE IT, before becoming IT! If you want to be a successful actor then you must live the life of one before people will recognize your talent. Live the schedule of one, train, rehearse and prepare like one. Do amazing work consistently over and over and prove yourself. You cannot expect people to see you as a successful actor if you are not living the life of one.

NEA – its my shortened name or nickname and it means Forever Young.

I have two films coming out next year. I had the privilege of working with and being directed by Channing Tatum in Dog movie and I play a really cool character Vetone in Russian Room. I’m also working on an Ai Artificial Intelligence character for a project. I’m very excited about this type of role, I love these kinds of characters…and that’s all I can say about it for now! I’m in the mix for a few other projects and we’ll see what happens!

Loving someone so much that it fills your heart with joy!

Nikola Tesla – because he changed the world. I would ask him, “I want to know the truth!” hahaha I would also ask him about all of his inventions!

My dad would always say, don’t put off till tomorrow what you can do today.

Albanian Charity – Fundjave Ndryshe – https://fundjavendryshe.org/
“Fundjavë Ndryshe” is the largest foundation in Albania focused in humanitarian help. The mission of “Fundjavë Ndryshe” is to fight poverty, by community development. This organization has focused its activity on the social integration of the individual into society, going first through the stages of economic, health and psychological support. Organized through a detailed structure, we apply the creation and implementation of humanitarian programs in various dimensions of Albanian society.

I have a soft spot for the elderly. I loved being around my grandparents. Growing up in such a poor country, I always took to helping elderly people in need. One of my dreams is to establish fully funded facilities for elderly who cannot afford care themselves.

In theatres near YOU! Working on big box office movies.

I don’t really have a favorite song. I love different types of music.

Book of the Moment – Will by Will Smith

Quote: “The time is always right to do what is right.” MLK

Travel Destination of the Moment – London