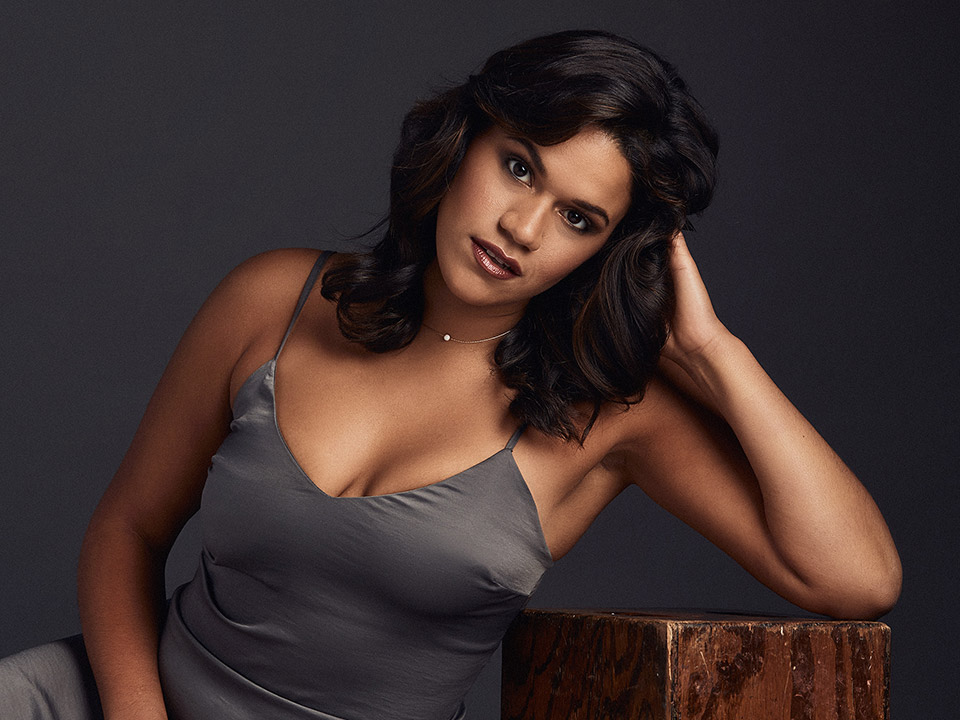 Check our interview with talented Latina actress and vegan/animal activist Justina Adorno who stars in the bold and provocative ABC drama series “Grand Hotel,” opposite Roselyn Sanchez and Academy Award-nominee Demian Bichir; she will play ‘Yoli,’ the black sheep daughter of the extravagant Mendoza family who owns the luxurious Miami Beach Grand Hotel.

Executive produced by Eva Longoria, the series which is loosely based off of the Spanish series “Gran Hotel”, follows the extravagant lives of the Mendoza hotelier family comprised of the charismatic ‘Santiago Mendoza’ (Demián Bichir), his glamorous second wife, ‘Gigi’ (Roselyn Sánchez), and their adult children. The hotel’s loyal staff and patrons round out a contemporary, fresh take on an upstairs/downstairs story. Wealthy and beautiful guests bask in luxury, but scandals, escalating debt and explosive secrets hide beneath the picture-perfect exterior. ‘Yoli’, played by Adorno, is the kindhearted spitfire daughter of ‘Gigi’ who is constantly compared to her thinner and more beautiful twin sister ‘Carolina’ (Feliz Ramirez). 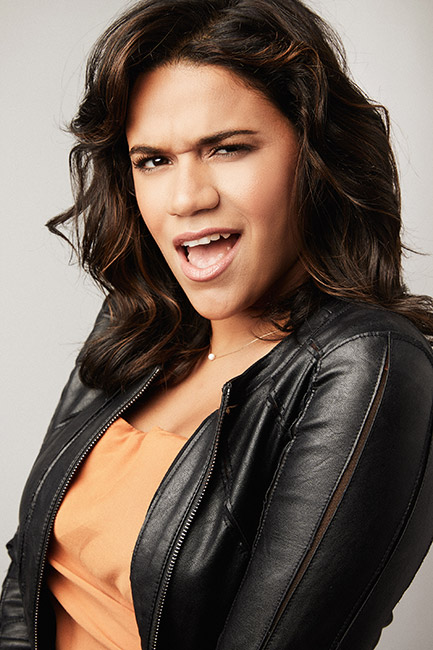 My first acting role was in second grade for my school’s Christmas show as “Queen Elizabeth”.

I have had acting classes since my freshmen year of high school. I was enrolled in a magnet program for the arts and by my sophomore year I went to a boarding arts school to study drama and then continued that into college.

The best part is meeting new people and working on new stories. The worst part is watching people doubt your capabilities but that just makes you a stronger individual and actor.

I find balancing my personal life and acting life not as difficult at this point in my career. When I’m not working, I always make time for those that I love around me and for the things I want to do but I could do better at finding “me” time.

It all just depends. The most common thing I do for all characters I play, is to gather as much information as I can about them within the script. As I’m reading the script, I focus on what others say about them, what they say about themselves, their actions, their wants. I also try to find music that inspire their story to get me in a specific head space. It’s like getting to know someone you’re in a relationship with; you want to know everything possible. Its exciting and you fall in love.

Now tell us about your work in the upcoming ABC drama series “Grand Hotel?”
And about your role as Yoli?

GRAND HOTEL! I’m so excited! I’m just at a loss for words now that the air date is approaching. Truly, this is such a precious moment for me. I knew that my first series regular role was going to be one that I would be proud of and WOAH was I gifted with YOLI. “Grand Hotel” is the type of show I would watch on TV and say to myself, “I wish I was on this show.” Now, I can actually say that I am on the show. I still haven’t watched the whole season, so I’ll be on the end of my seat with the rest of the world that will be watching. I think Yoli will be taken well. She is for sure relatable and I’m proud of our work on the show!

How is working with such a talented cast and also with Executive producer Eva Longoria?

Working with the cast including Eva has been MAGIC! I mean, there was chemistry between us from the moment we all met. I felt it during the filming of the pilot. We are all down to earth individuals who also love having a good time, so we have a great balance on and off set. Being on set was so much fun. I had to tell one of the ADs to make sure they didn’t schedule my scenes in one day so that I would be able to come to set more! And Eva, she has been the sweetest gift of all. She has been a mentor to me and a friend. I’ve felt welcomed and apart of the family since the day I met her. We are both Pisces, we stick together 🙂

I had a reoccurring role in the Netflix series “Seven Seconds,” which happened right before “Grand Hotel” (along with a few other shows and movies). I also assistant with directing a short film a couple of years ago called TRAPPED. The team and I were first time filmmakers, it was on film and we had a very small budget to shoot in a week. It was such a great experience and I hope to direct in the near future!

I love playing the underdog. Giving a voice to the voiceless is something I have always gravitated towards. I would love to be part of an independent film someday, but honestly, I’ve been missing comedy. I watched SOMEONE GREAT on Netflix (with Gina Rodriguez) and was like AHHH I want to be in a movie like this, I basically lived it. 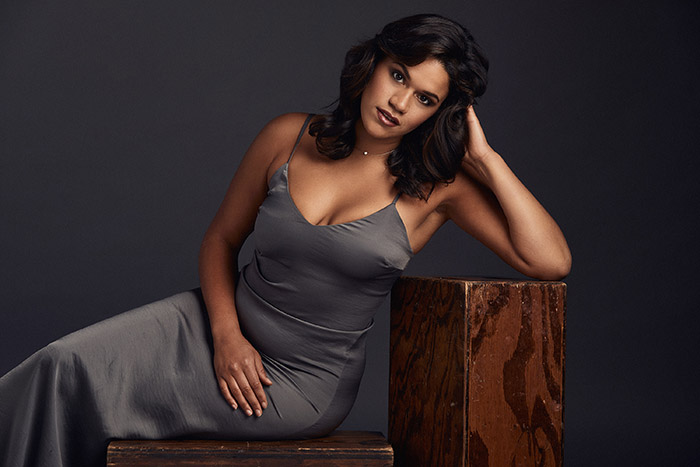 Which role has been the most challenging and which one was your favorite?

The most challenging role would have to be Electra in Iphigenia and other Daughters that I played in college. I was chained to an actual tree stomp, crazed my hair, and ate dirt (which were all my choice). It was for sure difficult because it was a physically demanding role as well as emotionally demanding and that’s theater. I had to live the story with every performance. I love theater and respect Broadway actors so much. I can’t wait to go back to theater and get that experience again.

One of my favorite roles to play (besides Yoli of course) would have to be a role I was cast in for the NBC Diversity showcase. I did a scene called Home Birth written by Krystal Banzon. I had a blast and yt was a theatrical experience where we got to create our own unique version of the script. Everyone was so collaborative, and it was so natural it made my heart smile. I had so much fun working with the director Leta Tremblay and my phenomenal acting partner Talia Thiesfield. I’m telling you, I am so grateful for everyone I’ve worked with in my career so far.

What is next for Justina Adorno in 2019?

Life! I’m excited to see what happens with “Grand Hotel” this year. I’m also working on a project that involves my journey into living a plant-based cruelty free life.

One of my favorite actresses is Kate Winslet. I remember watching TITANIC in theaters at like 6 years old. Kate Winslet as Rose really empowered me to fight for life in every sense. She is such a transformative actress and most every movie she’s been in is in my top favorite movie such as ETERNAL SUNCHINE OF THE SPOTLESS MIND, THE HOLIDAY and THE READER, to name a few.

I can’t leave the house without my phone, my keys, and my glasses.

I love all music. I know everyone says that, but my Spotify account is all over the place from Broadway showtunes, Cardi B, Troye, The Weepies, Ingrid Michaelson, The Veronicas to Phil Colins.

My perfect Sunday is spending time with a loved one eating outdoors at a farmer’s market with a puppy during the day and at night making a nice dinner and creating a song.

I would want to meet the first human on earth. Maybe they will have some answers to all my questions.

I love a plot! That’s why I’ll be watching “Grand Hotel” ;). What’s most important to me is something that has a statement to society. I’m looking forward to AHMT and new episodes from “Dear White People.”

This is too hard… I LOVEEEE FOOD! I would say right now it would be either fresh Jackfruit or Mango or RAW cucumber avocado pasta!

That’s so hard! My favorite cheat food would be a good vegan chicharrón taco and a toss between a good breakfast burrito or French Toast…. All vegan of course!

As of right now there are so many charities that I want to get involved with. I want to support animal rights whenever possible as well as Body positivity /Eating disorder charities and Mental Health.

Quote: “There is only one thing that makes a dream impossible to achieve: the fear of failure.”

Holiday Destination: Wherever my heart feels most full in the moment.

Sports Team: I don’t have one