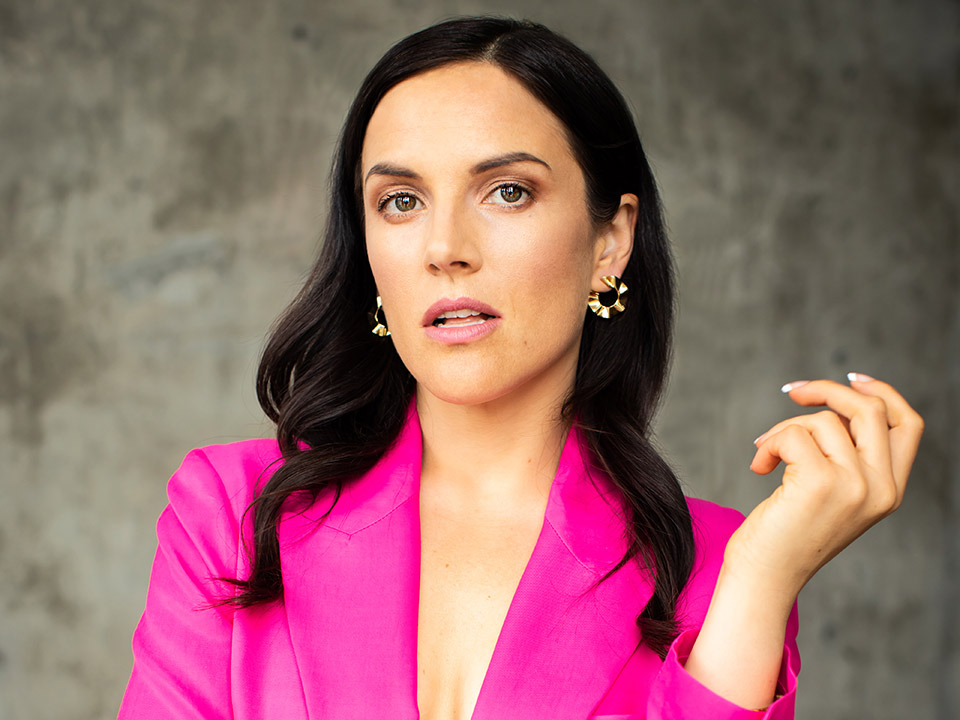 Check out our interview with actress Stephanie Izsak who can be seen as Lena – alongside Randall Park and Melissa Fumero – in the new Netflix comedy “Blockbuster.”

Randall Park leads the series as Timmy Yoon, where he is operating the last remaining Blockbuster Video store in the country. The show follows Timmy and his staff employees, including his long-time crush, Eliza (Melissa Fumero), as they fight to stay relevant. The only way to succeed is to remind their community that they provide something big corporations can’t: human connection.

Stephanie has amassed numerous film and TV credits, recurring on The CW’s ‘The 100’ and Netflix’s ‘Firefly Lane’, appearing in MANY television movies, and continuing holding down the law as Central City’s sweetest cop, Officer Daisy Korber, on The CW’s ‘The Flash’. Hi Stephanie, please tell us a little about you?

Well, I’m an actor, writer, director, cat mom, book nerd Canadian living in Vancouver. And I’m a Taurus, Leo rising, Sagittarius moon, if you care about that kind of thing.

I think my parents saw how much energy and enthusiasm I had for life, and they picked up that theater and acting classes would be a good place for me. My mother loves the theater and started taking me at a very young age, and I got hooked pretty quickly.

It’s tough to imagine my life without being an actor and an artist, it’s such a huge part of how I’ve see myself for so long. Being a working actor is such a gift. I get to constantly explore what it means to be a person in a relationship with the world. It’s so much fun and for all of the ways that this job is hard- and that’s a lot of ways- it really fulfills me.

Best: It’s just the best job on earth. Biased opinion, but I think it is. If I had to narrow it down…the best part is having one of those transcendent acting experiences where you feel so connected and truthful and you’re fighting for something and time seems to slow down…it’s like a high, knowing you’ve done justice to the story and your character, to the best of your ability. Those moments.

Worst: I don’t know if everyone feels this way, but it can get lonely. It can easily get discouraging. It can be hard on you. You need a lot of grit and resilience to deal with all of the silence after pouring your heart into an audition.

Every role is different. Sometimes I need a lot of work to understand who I am and to make the circumstances feel real and other times – boom, I just know it. I connect to it instinctually. Comedy is different than heavier stuff, usually. Comedy is a lot more about tone and making sure you know why things are funny but then never playing the joke….see? It’s all over the place…

Tell us about your work in the upcoming Netflix comedy “Blockbuster,” and about your role as Lena.

Yes! Blockbuster was so much fun. I used to do a lot of comedy on stage, but not as much on camera so this was a DREAM. I play Lena, whose mom owns a bait and tackle store in the same strip mall as Timmy’s Blockbuster store. I’m a bit of an outsider, returning home to live with my mom, and I sort of stir things up a bit for the Blockbuster crew. How was working alongside Randall Park and Melissa Fumero?

Amazing. They’re both such pros, deadly funny and just really kind, gracious people. Doesn’t get better than that.

Many! But I would be remiss if I didn’t mention my role on The Flash. I’ve been playing Officer Daisy Korber for three seasons and I absolutely love it.

Great question. I love letting loose and delving into the areas I don’t experience in my real life. So villains are super attractive to me, darker characters with a lot of fight in them. I’d love to do something set in another era as well.

I’m one of those actors who really looks at what we do as an act of service. I’ve been changed by the stories I’ve connected to on screen or on stage. I’m very proud and humbled to be a part of that process, I hope, for others.

Love it but don’t take it all too seriously. Learn how to trust yourself and trust that what is for you will find you.

Be humble. Be kind. Say thank you.

Oh boy. Probably that I take myself too seriously! Always working on that…but she’d say I’m an earth mama by default and fiery when I need to be.

‘Boy, She Tried Hard’. Sometimes to my detriment!

I’ve got a few projects I can’t quite talk about yet, but I’m very excited about them. I’ll be directing another short in 2023 and am in talks about a feature beyond that. Acting-wise, we’re working on the final season of The Flash, which will air sometime in 2023.

Don’t believe in cheat food. All food is good food.

Friday night with a glass of wine, a good movie, my fiancé and my cat beside me, and in bed by 10.

First person who comes to mind would be Quentin Tarantino, for obvious reasons but also because he just seems like a good time. A close second would probably be Lucille Ball, who I’ve loved since I was a child. I have so many questions for her.

A few! All focused on animal welfare and fighting for legislation that protects animals and animal activists. I really believe people are wising up to how detrimental animal exploitation is, and what that says about us as a society. More and more people feel changed by that and then want to see it change. I’m hopeful. Currently I support the World Wildlife Federation, Animal Justice and the BCSPCA.

Way too hard to pick one, but right now I’m obsessed with a band called Lucious. Its this duo, two women who sing in these gorgeous Americana-style harmonies. Ugh, they kill me. Something about their voices brings tears to my eyes. I’m not joking- there’s one moment in one of there songs where I will always tear up. It’s stunning.

If you see my film Consumer, you’d know…but I think it’s something that we don’t know enough about yet. The effect its had on me…there’s good, but there’s an awful lot of bad, and I don’t see enough being done about that. Social media has been around long enough now that some very scary statistics are beginning to surface about how it affects us, our minds and our societies. I don’t know. It’s complicated, I guess.

Quote: “I want to feel my life while I’m in it” – Meryl Streep

Movie: The Virgin Suicides by Sofia Coppola or Rosemary’s Baby