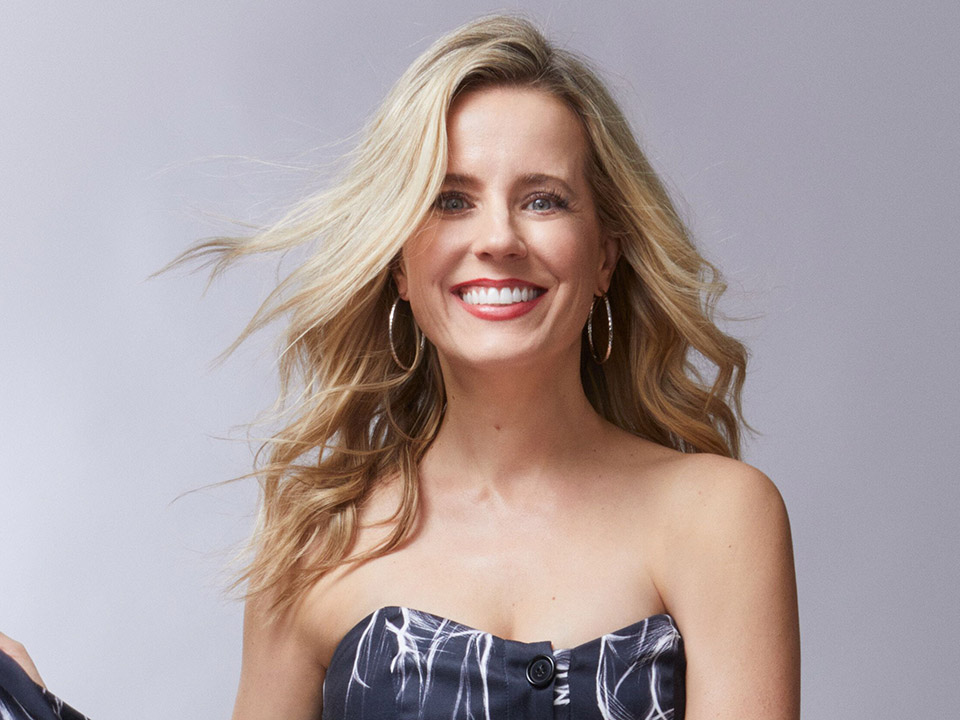 Allison’s career has made her a familiar face among television lovers. She first burst on the scene as ‘Caroline’ in the hit comedy “That 70’s Show” where she played Fez’s stalker. She went on to play Amanda Bynes’ best friend ‘Tina Haven’ in “What I Like About You” before joining the ABC comedy “Carpoolers” with T.J. Miller and Jerry O’Connell directed by The Russo Brothers (“Avengers: Endgame”). She went on to play ‘Lauren Fletcher’ in the soapy high school series The CW’s “One Tree Hill” with Sophia Bush, only to circle back to comedy in one of Nickelodeon’s biggest series “Nicky, Ricky, Dicky, and Dawn” as mom to the foursome, ‘Anne Harper.’ 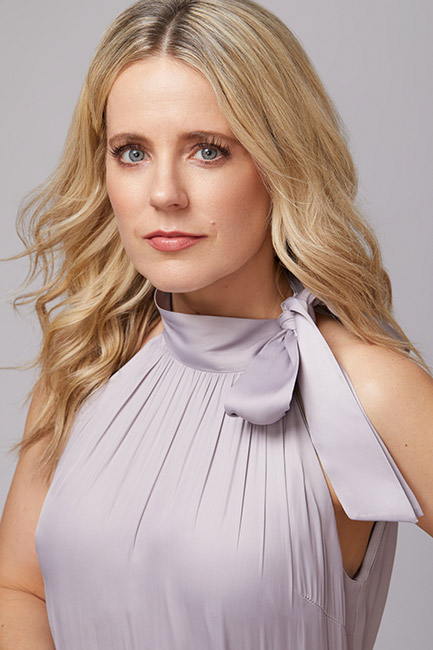 Hi Allison, please tell us a little about you?

Well, I was born in South Carolina. I grew up singing, dancing and doing musical theater. When I graduated from the College of Charleston, I moved to New York to pursue an acting career. I was lucky enough to land a dream role in the off-Broadway production of The Fantasticks, which I performed in for over two years. I then moved to Los Angeles, shifted gears to acting in television and films, married a childhood friend and had 2 awesome kids.

I started out by doing community theater in my hometown of Columbia, South Carolina and I started acting professionally at various summer stock theaters during my summer breaks from college.

Being able to do what I love is one of the greatest gifts the universe has given me. I’m filled with deep gratitude every single day that I drive on to a studio lot, sit in the makeup chair or step on to a set.

Tell us about your work in Netflix’s family comedy “The Big Show Show?”

The Big Show Show is a fun (and funny!) family sitcom that debuts soon on Netflix. I play Cassy Wight – she’s a go-getter real estate agent, the wife of WWE superstar Big Show, and a loving mother to their 2 daughters and 1 step-daughter.

Well, the series begins when Big Show’s teenage daughter from a prior marriage comes to live with him, his wife Cassy (me!), and their two daughters. The 7 foot tall, 400 pound wrestling star quickly becomes outnumbered and outsmarted. Throughout the series we’ll see Big Show figure out exactly what a post-wrestling life looks like and we’ll see Cassy finally chase her real-estate dreams, now that her husband is back home and can share in the parenting duties.

How was working with WWE superstar Big Show?

It has been a dream. He’s a joy on set and his work ethic is incredible. He’s always the first person at work (I pride myself on being hyper-punctual & he always beats me!) and the last to leave. He’s also incredibly funny – his fans are going to love seeing him in a comedy.

Now tell us about the huge success of your work in hit shows “That 70’s Show,” and “What I Like About You?”

Ah! That ‘70s Show was my first real job in Los Angeles. I’d recently moved to town and the entire cast was so welcoming to me – they were my first LA friends. I had so much fun working on that show and Crazy Caroline was a dream role. The writers wrote her so well and I had a blast playing her.

What I Like About You was my first steady, series regular role on television. I remember the day I got the job like it was yesterday – I couldn’t believe my luck. That show was a blast to work on. Tina was so funny and irreverent. I often wonder what she’d be up to today.

After What I Like About You, I did a series on ABC called Carpoolers with Faith Ford, Jerry O’Connell & TJ Miller. I played an anxious young mom and wife named Cindy who was also a little bit crazy. It was a really funny show – it’s a shame we only ran for one season.

After Carpoolers, I joined the cast of One Tree Hill, playing Lauren Fletcher. That job was so much fun because we shot in Wilmington, NC and the cast became really close. I was used to doing half-hour comedies so I had a blast switching genres and doing more dramatic scenes.

After One Tree Hill, I spent 4 years playing Anne Harper on Nicky, Ricky Dicky and Dawn. It was a blast. I loved playing Lizzy Greene’s mom and I still sometimes forget she’s not my real daughter. Love that girl. 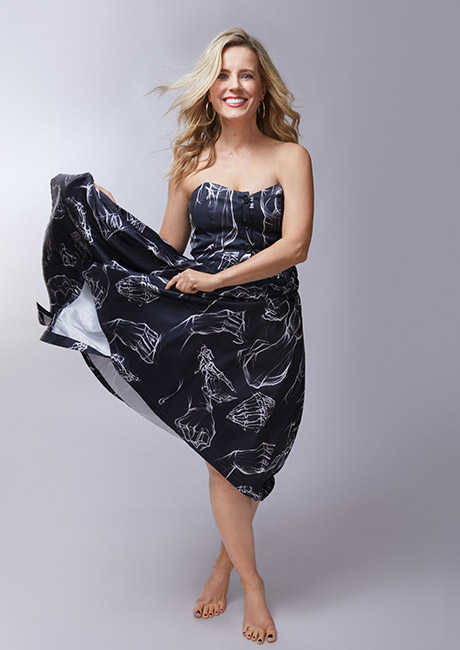 For me, the most rewarding part of my work is the relationships I make on set. When you make a comedy you’re together all day – rehearsing and making each other laugh. It’s a really bonding experience. When a show ends – it’s so tough to say goodbye to all of these people who have become like an extended family. That’s the hardest part of the job for me.

Oooo….I love this question. It’s a tie between a veggie-packed soup or a poke bowl.

“Tired Mom?” Haha – I truly hate shopping so I don’t have an exciting wardrobe.

I guess you’d have to ask Elizabeth, my best friend since we were babies. I hope she’d say that I’m loyal, down-to-earth and always there when times get tough.

Well, I’m looking forward to the release of The Big Show Show and crossing my fingers for a Season 2. I have a few other projects in the works that will be exciting if they work out. Until then, I look forward to some fun trips with my family.

Feeling healthy, safe and loved – and being able to recognize all of those feelings in the moment.

Well, I get woken up around 6/6:30 by one or both of my kids and then it’s a complete circus until they’re both off at their separate schools. That’s when I head to work, rehearse or shoot and then get home in time to help with homework & make dinner. Then it’s about an hour of chaos – chasing kids around, feeding the dog, baths, sometimes (oftentimes) yelling, and finally BEGGING the kids to go to sleep. Then my husband usually gets home and we have dinner and end the night watching a show on Netflix.

Ooooh – I’d wake up around 9AM (this is a fantasy, right?), enjoy an entire cup of coffee without it getting cold, go on a hike with my family, grab tacos from a taco truck on the way home, read a great book while the kids nap or play quietly, prep dinner while the kids & dog play in the back yard, relax while my husband grills burgers and eat outside while we all watch a movie on our movie screen. And as long as this is MY fantasy – the kids give themselves baths and go to sleep early without any whining. And then I end the night with a long bath and that great book.

That’s easy – Lin-Manuel Miranda. Not only is he a genius, he’s also putting love and positivity out into the world.

My mom was big on the Golden Rule when I was growing up and I try to live my life by it. It’s really simple – “Treat others the way you want to be treated.” It never fails.

I’ve done a lot of work with Rock the Vote – I feel passionately about helping young people realize that their voice matters. I also love Miry’s List – they help refugee families get settled through crowdsourcing solutions.

Not including my family? Ah – a good book, solitude, and a warm bath.

Agh – an actor’s life is so crazy – I have no idea where I’ll be in 5 years. Hopefully, I’ll be on a show that I love, surrounded by a cast and a crew that feels like family. OR maybe we’ll be heading into a 5th or 6th season of The Big Show Show! That would be a dream.

Jolene, by Dolly Parton. It’s a haunting, almost love-song sung from the viewpoint of a woman pleading to Jolene to not steal her husband. It’s also an incredibly simple song – there are only 200 words in it and yet it tells a full story. Dolly is a genius.

I really love all types of music. I was raised on Broadway showtunes so that will always be in rotation. When I work out, I like hip hop or pop – loving Lizzo right now. And when I’m at home I’m either listening to Motown or bands like Nathaniel Ratliff & the Night Sweats, Shovels and Rope & Lake Street Dive.

For now, I like it! I’m lucky enough to have not grown up around it and my kids are still too young to be influenced by it. Ask me in a few years – I’m sure that will change.

Thanks for asking! You can follow me at @allisonmunn on both Instagram and Twitter. I’ll be posting a lot of fun behind-the-scenes photos from The Big Show Show.

Tv Show: Of all time? Friends