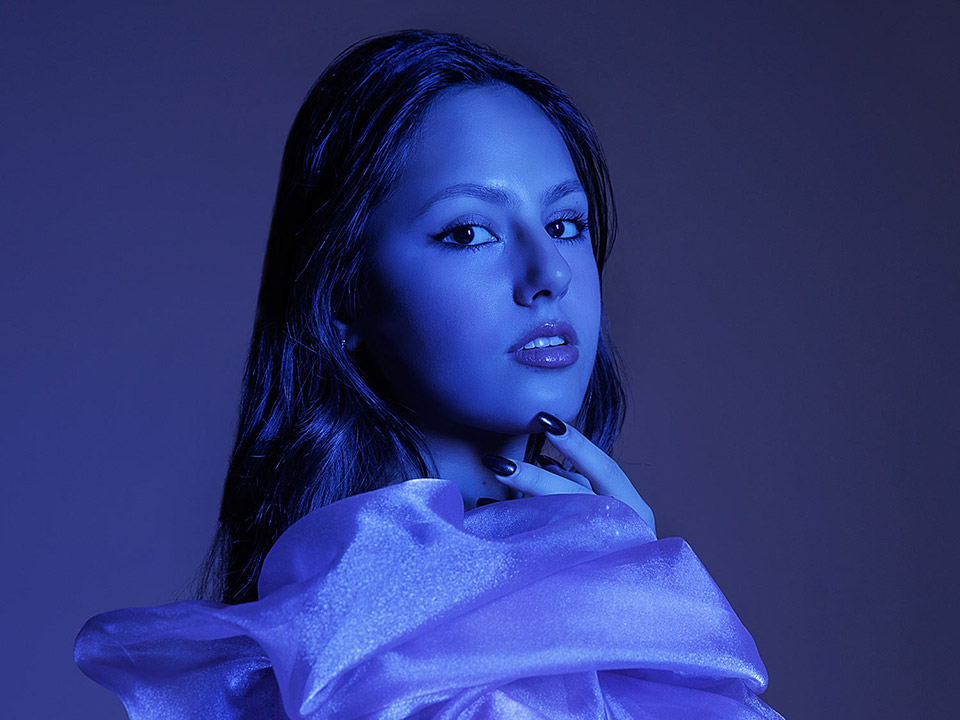 Check out our interview with New York pop artist Sindy Hoxha who just released her new single “feeling blue” that oozes with sincerity and authenticity, as her raw vocals show every ounce of emotion.

Hi Sindy, please tell us a little about you?

Hello! I’m an 18 years old singer/songwriter. My ethnicity is Albanian. I was born and raised in Italy for 11 years, and then moved to New York City. I’m a freshman in college, and pursue singing/songwriting alongside my academic work. I have been singing since I can remember, and began refining my voice professionally at the age of 10. After relocating to New York City, I continued training my voice with a vocal coach. In the meantime, I was uploading weekly covers on social media (i.e. Instagram and YouTube) to track my vocal strengths, weaknesses, and improvements!

Couple years ago, in the midst of an “apocalypse” my creativity surprisingly ignited, and my songwriting journey began! I haven’t stopped composing songs since.

I have always perceived music as my main artistic outlet. In 2020, when I first discovered my songwriting skills, I took it as a sign for me to continue my path in music. This is only the first step of my journey. And I look forward to what is awaiting ahead of me.

Well, I have only recently embarked in this new music journey. Getting recognized by potentially more media for an original single is already life changing – just the idea of having listeners enjoying my songs, especially “feeling blue” means so much to me!

My sound varies depending on the kind of song. The sound of “feeling blue” is: melancholic, soothing, and mellow. 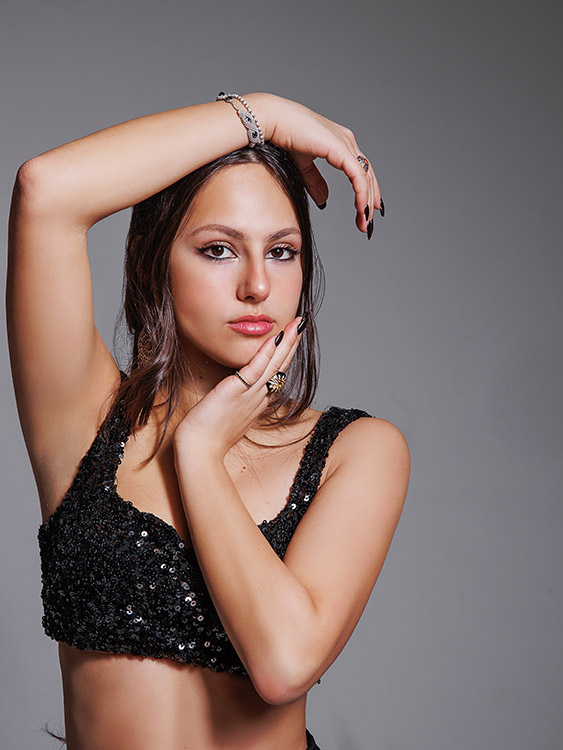 It is rather a chain of influences. Since I was little, my dad and I would dance and sing our hearts out to music on Italian radio stations. Through him, I discovered musicians that have been inspiring me to this day! Most importantly, it is through my dad that I discovered my talent and passion for songwriting. With each new song I’d write, my passion for music grew stronger. I started understanding the valuable and powerful connection among words, music and emotion. Songwriting has become a means through which I can freely express my feelings, and myself.

Yes, I play the piano. At the age of 7, I began taking piano lessons and continued playing professionally for a few years. After moving to the United States, I decided to simply accompany my singing with piano chords and progressions.

There are definitely occasions where I get nervous. Especially on release day, or when I show my songs to my friends. Excitement beats my nervousness every time, though!

Tell us about your new single “feeling blue?”

“feeling blue” is a melancholic ballad that is meant to portray a rollercoaster of emotions resulting from a heartbreak and toxic relationship. I began writing “feeling blue” by simply sitting with my hands on the keyboard. I just let my emotions flow from my mind to my fingertips, to finally the keys. I didn’t overthink it, just let out whatever wanted to come out. As soon as I got my first chord, I knew it was going to be a soft song. A feeling of sadness resonated with me.

The main underlying theme i guess is the aftermath of wishful thinking, which as humans many of us experience haha. It reveals phases an individual might go through when realizing that they have been treated unfairly. Growth is also conveyed in “feeling blue”, as hurt and confusion turn into growth and self-investment! And If anyone will resonate with the theme of “feeling blue”, I hope it encourages them to let go of toxic relationships (whether they’re friendships, romantic, or even professional relationships), and regain their confidence and freedom! 🙂

People genuinely resonating with my work is the most rewarding part. 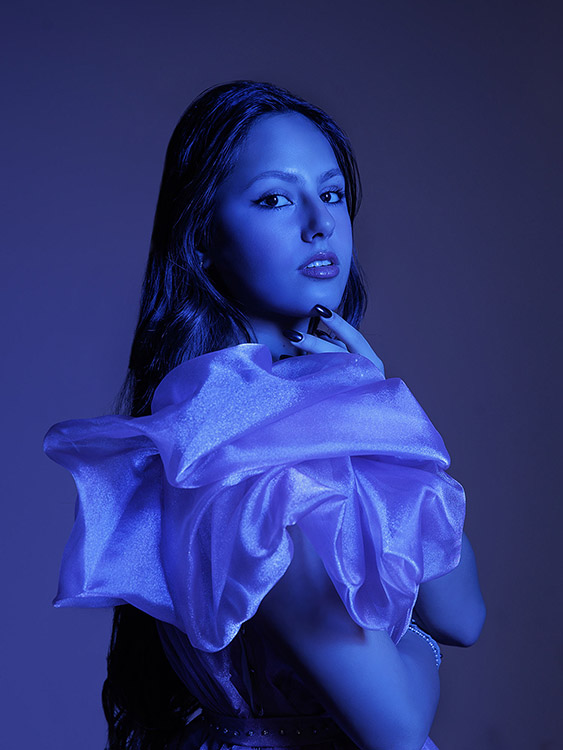 To never assume, and to just push through any obstacles and hard tasks. I realized that Nike’s trademark “Just Do It” holds greater meaning than its simple terms might portray.

Put yourself out there for opportunities, and take the risk.

“The Search” because fundamentally, my journey is a search for a deeper meaning, with the goal of realizing the self in me.

Definitely more releases! (maybe my first EP!? 🙂 I have also been working on new songs, so I look forward to finalizing them and hitting the studio!

Too many to choose! I Love broccoli, I could eat broccoli for breakfast, lunch, and dinner. Oh, and asparagus.

It varies. For instance, this winter I have been craving cinnamon rolls a lot!

My fashion style is a combination of trendy, modern, artistic, and elegant.

Aside from songwriting. Traveling with my family is another one of my main sources of happiness.

The iconic Whitney Houston and Amy Winehouse. I mean, who wouldn’t want to meet Whitney?! Her vocals are beyond incredible. On the other hand, Amy Winehouse’ songs are my go-to karaoke songs. Her voice is so unique, I believe a collab with her would have been so cool.

One of my dream holidays is Fiji. I’d love to go with my parents and my brother, or even a group of friends!

Definitely releasing more and more music (with other artists as well), and performing my own songs at venues!

My favorite song changes every week, lol. “La Mia Storia Tra Le Dita” by Gianluca Grignani will always remain one of the most special songs for me. Since little, it has been our family’s ritual song that we would play every time we travel.

Social Media has its pros and cons. I believe that as an artist, social media is the main way to virtually connect with the audience. Critics, whether positive or negative, are always going to be there on social media. So, as long as I’m able to filter out the good and the bad, I think Social Media can be a safe space to communicate with others.

Book: “A Thousand Splendid Suns” by Khaled Hosseini and “Everything I Never Told You” by Celeste Ng.

Quote: “The greatest glory in living lies not in never falling, but in rising every time we fall” – Nathaniel Hawthorne

Movie: “The Truman Show” and “Where The Crawdads Sing”

Tv Series: “Breaking Bad” and “Stranger Things” are my all time favs!

Favorite Food: An Albanian dish (preferably made by my mom) called Byrek is definitely one of the Top 5.

Sports Team: I am not a huge fan of sports, so I don’t have favorites.