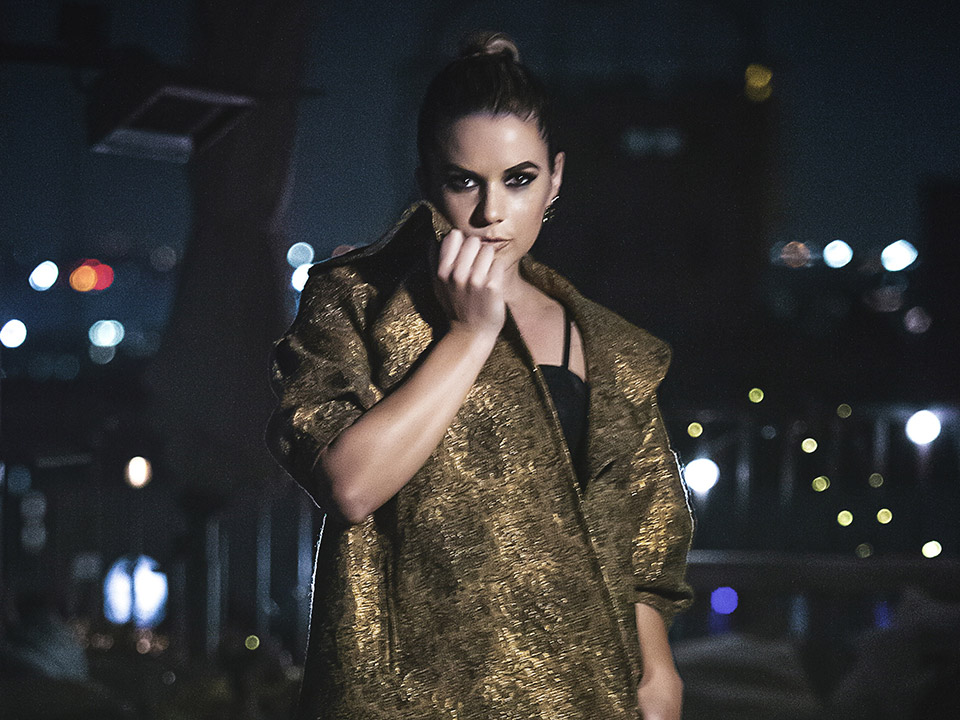 Check out our interview with Pop Soul Singer/Songwriter Jenny JAM who just released her new single and video entitled “Big Lonely Cloud.” The visuals were filmed entirely on an iPhone during lockdown in Los Angeles. Being trapped in downtown Los Angeles with nowhere to go made the urban landscape feel empty and constricting. Jenny’s strong lyrics and fierce beat accompany the 90’s MTV style video.

With a background in musical theatre, acting and modelling, Jenny utilizes her dynamic singing talents and experiences to craft her own unique and genuine music. Inspired to write after a series of traumatic events, Jenny used writing as a form of release, wanting others to hear her story and learn from her experiences and mistakes. The overall theme of her music highlights turning negatives into positives. The musician explains, “You can always take the positive out of the worst of experiences, as there is always a lesson – no matter how big the price to pay is”.

Jenny draws from a panorama of influences ranging from jazz, soul and blues, to the classic 60’s rock bands including The Rolling Stones, The Beatles and Fleetwood Mac.

Hi Jenny, please tell us a little about you?

I’m a London-born singer-songwriter who trained as an actress, worked as a business development manager for London-based holographic company ‘Musion 3D’, and modeled for runway, commercials and catalogue. I now live in Los Angeles writing, recording music, and acting. I write music about real events that have happened in my life, with the hope of motivating, helping or inspiring others with my messages.

After leaving Italia Conti Drama School and Roehampton University London, where I studied Drama and French – I sang in different bands like KooKoo House (you can find them on Spotify), and recorded with a couple of producers in London who had found my demos online. However, I soon realized that the music industry had very much changed and it was no longer a case of getting a record deal and getting paid a lump sum for artist development.

I eventually moved to Los Angeles and met my now producer, Ikuma Matsuda by a chance encounter through a friend of a friend. I performed at his studio and from there we started creating music together. Ikuma used to be part of Interscope records and through him I have met some very talented individuals who have helped launch my career.

I also believe that manifestation, true self belief, and a lot of hard work and perseverance contributed to getting noticed in the industry.

I grew up on a combination of jazz, soul, blues, classical and 60s/70s rock. All had an integral part to play in my influence. People that really inspire me are George Michael, Amy Winehouse, David Bowie, Freddie Mercury and Nina Simone.

I don’t think I ever chose to make music, although I always sang. I wrote poetry and made up classical pieces on the piano from the age of 11. I never thought about marrying the two together until later on after a few traumatic experiences. I then just turned my poetry into songs and was lucky enough to find my current music producer who helped bring these stories to life.

I played violin from age 7-15 then changed to viola for 3 years. I taught myself piano and had guitar lessons for a year – don’t ask me to play guitar!

Anyone who says they don’t is lying!

Tell us about your new single “Big Lonely Cloud?”

“Big Lonely Cloud” depicts the loneliness of trauma and depression and is almost a premonition of events to come.

The lyrics describe feeling sad and alone at a party with people drinking and dancing but in fact the party is all in the mind.

“Faces all around me, guess I’ll be here a while” refers to the numerous zoom calls, tv shows and TikTok videos being watched during lockdown.

“My mind the vortex, a colorful complex, a battlefield by myself”, describes the daily struggle of trauma and depression.

However the chorus shows signs of hope, knowing that this chapter of sadness will end, wanting to move on and believing there is a way.

After coming back from London having nearly lost my Mum to Leukemia, and just on the cusp of the first global pandemic lockdown, I wrote “Big Lonely Cloud”.

I was in a very dark place when I wrote this. It started off as a late night poem, with a few chords on the piano, then turned into the song it is now.

It is a song with dark lyrics but an uplifting message.

Now tell us about filming it on an iPhone only. That’s amazing.

I felt like “Big Lonely Cloud” that was written just as lockdown was happening was very fitting to the times. My house mates (or as you say here ‘roomates’) who are filmmakers ‘The Ladies Dewald’, wanted to help me create a music video for the song.

Being trapped in downtown Los Angeles with nowhere to go made the urban landscape feel empty and constricting. They wanted to recreate that feeling using whatever we had available in the house – which was constricting! So we used the iPhone 8’s that we had, no equipment and a lot of plastic wrap! A true lockdown video, edited perfectly by David Bertolami. I feel like the plastic wrap really represented all the excess plastic used worldwide during 2020. 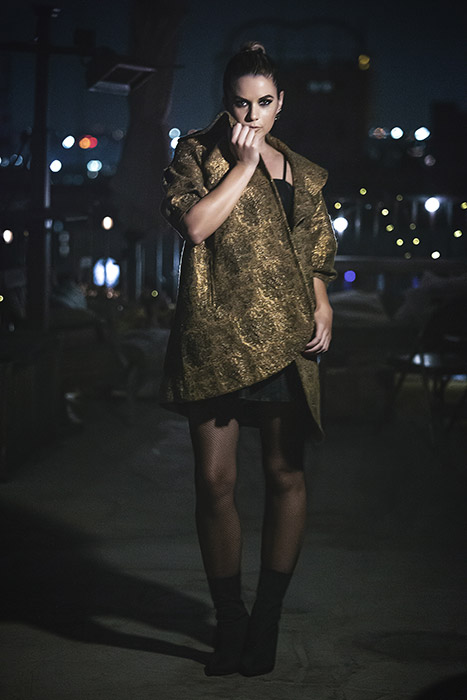 I had a tour planned in the UK at the end of 2020 which has now been put back to October 2021, Covid depending. I had to push back the release of my latest single “Big Lonely Cloud” from November 2020, due to lockdown and the election/storming of the Capitol. This all had affected my radio release date in the US and UK.

I am mainly focusing on writing and recording right now, so that when live shows are possible again, I will have all my new songs to perform. I just went on “Voice of America” and am enjoying being interviewed by various radio stations. I will be doing some online shows in the meantime as well.

To collaborate with a soul/jazz legend, record at Abbey Road studios in London, do an intimate live performance at Smoke Jazz Club in New York, perform at Wembley Stadium, be on the front cover of Rolling Stone Magazine and win a Grammy!

When you get messages from people who are going through something saying your song inspired them/helped them in some way. When I know people are genuinely enjoying my music.

What’s not – the meticulous journey of recording, mixing and going over and over notes because I’m such a perfectionist.

I’m releasing “Prove Who” which was recorded at Capitol Studios, featuring Reuben Alexander. I will also be releasing “My Letter to You” which is a song about my Dad who passed away in 2014 from lung cancer. I am booked on a concert in June in Utah and a mini tour in the UK at the end of the year – all Covid depending.

For someone who listens to music non stop and loves so many different genres of music, that is an impossible question! I can name many favorites but we would be here for a while! Shoutout to artist ‘Yellow Days’ though who I discovered during lockdown last year!

Exploring the world and learning about other cultures and languages. I also love being on set acting because you get to explore, understand and portray a different person.

It’s ok to be wrong. You just have to admit it, own it and learn from it. That’s how we grow.

There is no typical day in my life haha! It either involves writing music, rehearsals, recording in studio, starting the mixing process, producing my next visuals, social media marketing, working out, learning scripts, auditioning, having (virtual) meetings or more recently- being on a plane somewhere again!

Name one of your strengths

I will always make the best out of a terrible situation.

A warm sunny day with all my favourite people on the beach eating seafood, drinking wine, laughing, listening to music til sundown and beyond!

This is mood depending! Either “We are the Champions” by Queen or “River Deep- Mountain High” by Ike and Tina Turner.

To see all the people I love and care about really happy and succeeding. Even those I don’t know – happiness and joy is infectious.

I live 2 blocks from Skid Row – one of the most condensed homeless populations in the US. I mainly give to the people in my area. This can be cash or a hot meal. I also regularly give to gofundme pages for illness or hardship. Dog shelters also hold a special place in my heart!

A truffle burger with cheese from Umami and a Donut Friend – (check them out – they are Vegan donuts and you would never know!)

Probably talking about the other people they were dating as well. Also someone treating a waiter/ member of staff disrespectfully.

In all honesty, something I have definitely learnt is that life can change unexpectedly and rapidly. I have no idea where I will be in 5 years. If you asked me 5 years ago if I thought I would be here, I’d say – no way! I hope to be able to travel with my music and continue to help and inspire people across the globe but on a larger scale.

It’s very tough to keep on top of but it’s a great way of seeing what people I care about are up to. It’s also a great way of finding new artists and discovering their music. It is important however not to get too lost in it or obsessed with it.

Quote: “Always stay true to yourself and believe in you, then you will rise out of the ashes no matter what happens.”

This quote came from writing my first single “Morning Bottle”

Movie: 99 Francs (a French movie), but also American Beauty. A film that makes you reflect on life with a good soundtrack, is key.

Travel Destination: I’ve never been to South America, so would love to travel all around there.

Sports Team: I’m British and used to work at Chelsea football (soccer) club in London, so I guess they are my team!