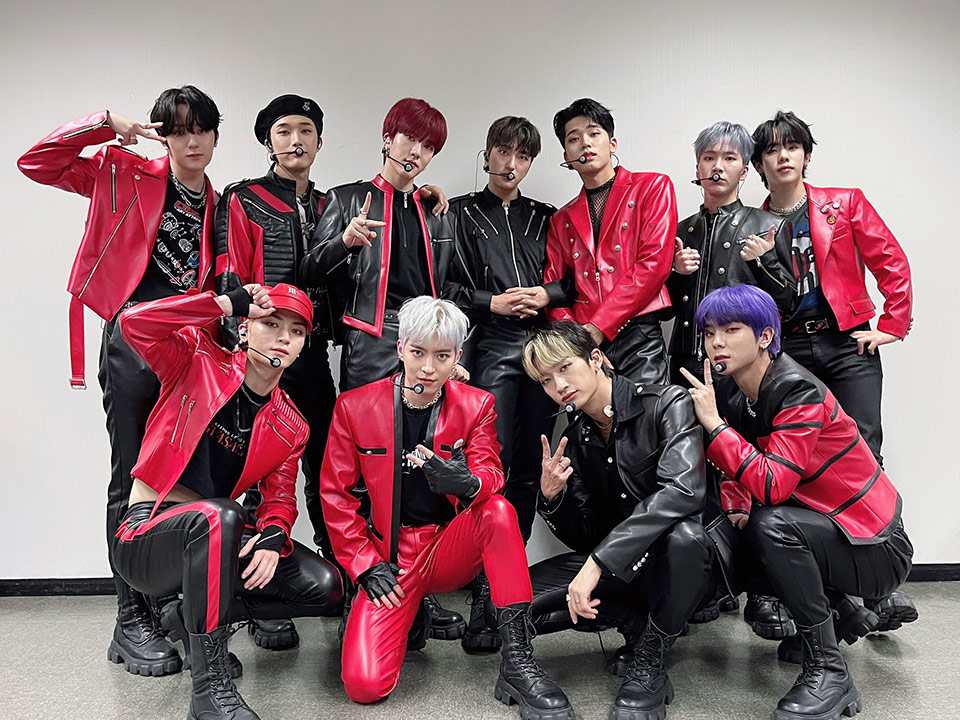 Check out our interview with popular 11 member K-Pop group Omega X. Omega (Ω), the last letter of the Greek alphabet, symbolizes the end, while the letter X denotes the unknown with infinite possibilities. Combined, Omega X symbolizes constant change and growth. All of the members of Omega X have previously appeared on reality TV audition programs or debuted with other K-Pop acts.

After a successful debut last month with their physical album selling out within the first 6 days of it hitting the market, with the music video viewed over 5 million times.

Describe yourselves in 3 words?

How has becoming OMEGA X changed your lives?

Hyuk : I laugh a lot more and love sharing hobbies with the members.
Jehyun : I’m having happy days now that I can make my dream come true once again.
Hwichan : Everything has changed. Practicing is so much fun, and I learn a lot from the members.
Taedong : After meeting the members, I’ve realized that having a team is more important and invaluable than performing well alone.
Hangyeom : I’m happy to see myself smile and no longer lonely now that I’ve got 10 brothers
Xen : I know what it feels like to be happy doing what you love to do.
Junghoon : I’m receiving a lot of love from the fans and living a very happy life.
Jaehan : I get to repay the people who support me. So every day is a happy day.
Sebin : Life has gotten busier and I feel I’ve gotten better looking! Because I’m being loved by many people!
Kevin : I’m very happy now that I feel proud doing what I love.
Yechan: I’m so happy to live and talk with the 10 hyungs every day who are so fun and cool, and I’m really grateful to be able to sing in front of the fans again. 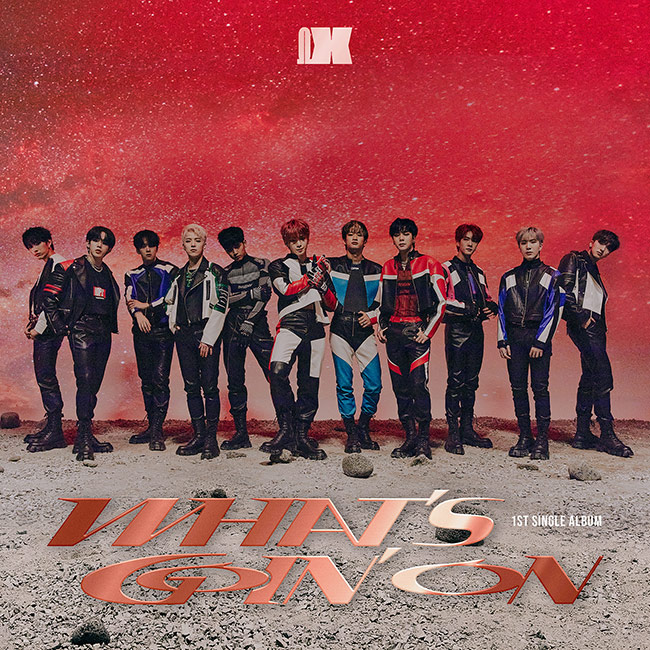 We’re sure you have been asked this million times but what made you all want to become performers?

Hwichan : My childhood dream was to be a singer. I spent a long time trying to become a singer.

Jaehan : I’ve loved singing since I was little, and I was so proud when people listened to my music and expressed their feelings. So I wanted to make people happy and heal their hearts with my music. Now I want to devote everything to fans and sing. That’s why I wanted to be a singer and that’s why I’m a singer now.

Hangyeom : Giriboy.
He is a true artist who’s not limited to a particular genre but freely expresses through music his stories and emotions, whether it be happiness, sadness or exhaustion.
I chose to make music because it suits my habit of writing lyrics when I’m stressed and need to unravel emotions, when I want to break free, or when I want to repay my gratitude for fans through music. I love my fans. ♡♡

Xen : G-Dragon sunbaenim, because he’s a superstar and my dream is to become a superstar.

Do any of you play an instrument?

Hwichan : I used to play drums when I was a trainee. I can still play the basic beats.

Hyuk : I play the guitar! I’ve been playing since I was little and I still play as a hobby.

Yechan : Studying the piano and guitar has helped me a lot in making music. I lack a lot of improvisational performance skills that Hyuk possesses, but I’m doing a lot of research on harmony and sounds.

Tell us about your new self-titled track “OMEGA X?”

All : ‘OMEGA X’, a song that bears our group name, is an energetic track that showcases Omega X’s charms with minimal EDM beats and powerful rapping.

Jehyun : I made a lot of scratchy sounds when singing to the point it felt as if my throat was bleeding.

Taedong : Compared with “Vamos” or “Ice Tag,” the choreography for this song is such a workout. I get my exercise done for the day after dancing to this song once or twice.

Kevin: On the day of the music video shooting, there was a slippery spot on the floor so we sprayed it with anti-slip spray but to no avail!

All: This single album “WHAT’S GOIN’ ON” is filled with OMEGA X’s unique charisma and hip sounds. The eponymous title track shows our unique color along with the intense guitar sounds. The B-side track “BAILA CON OX” is a song with a twist as it means “Dance with Omega X.” It’s a fun dance song that has the explosive power to elevate our performance.

Jehyun: The most rewarding part is reading the fans’ words and seeing them in person as they root for us and show their support and love for us.

Junghoon: It’s when a lot of people respect me and when my fans are happy.

Jaehan: My life has changed a lot since I became a singer and met the fans who listen to my music. It’s overwhelmingly rewarding for me to see the fans who have hope and to realize that I’m influencing them even in the smallest ways as they live their lives. So I always try to be positive and to give happiness.

Do any of you like to read, and if so, what are your favorite books?

Xen : I don’t have a favorite, but I love reading essays.

Hwichan: No one knows what fate brings with it.

Hangyeom: The time will never come back, so enjoy the stage.

Sebin: You have to be crazy to succeed in life.

How would you explain your fashion style overall?

Hyuk: My fashion style is neat and minimalist! Each member’s style is charming in their own way.

Jaehan: All 11 members have different personalities, and with that comes different looks. I like to challenge myself to different styles rather than sticking to one style, so you’ll see me in a variety of styles.

Kevin : It’s when you’re happy and proud doing what you love, and when you look back on life and there’s no regrets.

Hyuk: Don’t be afraid to fail.
Jehyun: I liked the advice my parents gave me: “It’s okay to take a break when you’re tired, but don’t give up.”
Hwichan: A true carpenter is the one who builds the house of his heart well.
Taedong: If you’re in a slump and feeling down, you’re already doing well. Slumps come to those who work hard, so there’s no need to be impatient.
Hangyeom: Giving is living. This is what my uncle always tells me.
Xen: You’re cool.
Junghoon: Be sincere. God knows what’s in the heart. Remember to have fun.
Jaehan: When someone says they’ve found hope because of me. I feel so grateful that I could give someone a reason to live.
Sebin: You have to be crazy to succeed in life.
Kevin: Whatever you do, you’ll do great, so don’t be afraid and go for it.
Yechan: When I was a trainee, I used to have low self-esteem. A staff member once told me, “Yechan, if you don’t love yourself, who would love you first?” From then on, I’ve cultivated a positive mindset.

Where do you see yourself and your careers 5 years from now?

Hyuk : On top of the world.
Jehyun : Receiving Rookie of the Year award at the year-end awards ceremony.
Hwichan: In 5 years, I’ll be a singer who delivers a message to a worldwide audience.
Taedong: I think we would go on a world tour, top the Billboard chart, and I would become the kind of hardworking person that everyone likes and admires.
Hangyeom: I’d become a top star who makes the fans proud and happy.
Xen: Number one in brand reputation.
Junghoon: Billboard’s greatest pop star.
Jaehan: Everyone in the world would’ve heard of Omega X’s music, and Omega X would become an influential group to a lot of people.
Sebin: Someone who’s respected by everyone.
Kevin: A talented performer who’s reached a level of competency based on my experiences.
Yechan: A member of Omega X, a Billboard group, an unprecedented singer-songwriter, and a performer.

Hwichan : I like Omega X’s “Younger,” because the lyrics are relatable and it gives courage and strength to many young people.

Xen : G-Dragon’s “You Do” is my favorite Korean song, because G-Dragon sunbaenim is saying to me that I could be like him.

Jaehan : It’s changed over time, but my current favorite is our song “Younger.” Everyone lives their reality with their childhood dreams in their heart. In this song, we shared our wish for them not to let go of those dreams but to achieve them with us. I hope many would listen to “Younger” and find hope.

Interview with “The Kings of Napa” actress Samora Smallwood