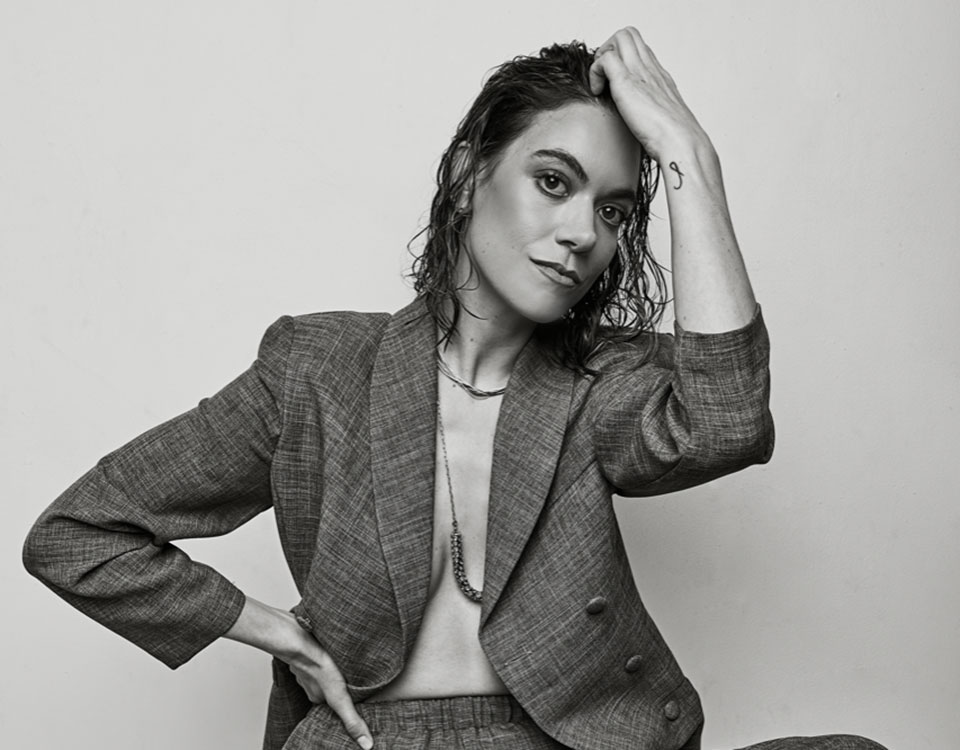 Check out our interview with talented actress J.J. Nolan who can be seen as one of the lead roles in IFC’s Pretty Problems, a satirical takedown of the rich elite. It’s a witty look at wealth, privilege and relationships over a couple of days of hedonism in wine country. JJ plays the fabulously-dressed toxic billionaire Cat Flax. The film took home the audience award at SXSW and the Maui Film Festival and the Jury Award at Sonoma Internationals Film Festival.

Previously J.J. has been see on many comedies including “The Big Leap,” “Silicon Valley,” “The Mindy Project,” ad HBO Max’s comedy horror SNATCHERS which was selected for Sundance. She’s also been known to dabble in drama appearing in such shows as SWAT and Chicago Med. 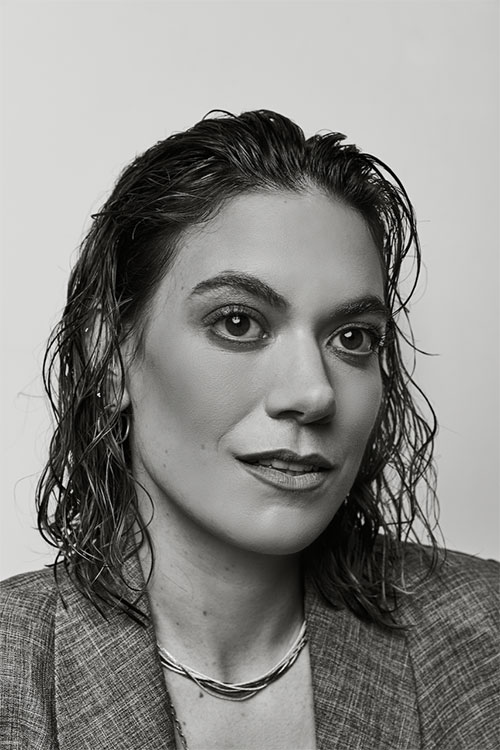 Hi JJ, please tell us a little about you?

I was born and raised in Dallas, TX, and my first love was fashion and my second love was sports. I ended up becoming a pretty big tomboy because sports were at the intersection of uniforms and trophies—and my dad told me I had to stop stealing my brother’s trophies (they looked better in my room). I played every sport I could, both for school teams and club teams. I would say my most notable accomplishment was breaking a wrist in the middle of a soccer game, and playing the rest of the game with a shinguard wrapped around it with ace bandage. I always thought I would play in the Olympics one day, but I decided to take the easy route and become an actor.

I was a tremendously shy kid, but I was a really good singer. I found a way to express myself through singing, which eventually opened the door to theater. I remember my mom dragging me into my first acting class. I thought it was very not cool of her. I was literally scream-crying outside the theater, petrified of having to talk to strangers, but she finally got me in somehow. Probably bribed me with Limited Too. But I ended up loving it and got really into my character, a secretary. I don’t remember what the performance was, but Mom says I typed away like I was born to play this secretary. Performing became such an exciting outlet for me. I started performing in church musicals, school talent shows, private choirs, public choirs, school theater—anywhere I could, while still maintaining my double life as an athlete and extremely shy person.

In every way. I always enjoyed performing, but I didn’t seriously consider doing it professionally until my senior year of high school. I was looking at two different paths—the first was to go to FIT and pursue a career in fashion design; and the second was to major in theater at UT Austin and then probably change my major to communications after a year and find a career in media. If you saw my SAT scores, you would understand why it was such an accomplishment to get into UT. But there were a few people I distinctly remember planting the seed of possibility for a third path—the path I ended up taking: my high school theater teacher, her best friend who was a manager in LA, and my dad. When it came time to make a decision, I chose the path less traveled. Moving to LA completely changed the trajectory of my life.

To say I had no idea what I was getting myself into would be an understatement. I was always enrolled in college classes to make myself feel like I was still doing something normal, but there is nothing normal about moving to Hollywood as an 18 year old with no life experience. Now I’ve been at it long enough to see a lot of close friends become stars and a lot of close friends leave it all behind. It’s been a pretty wild ride.

Well, I have a burning desire to step into other people’s shoes. It’s such a privilege to get to play in that way. I get really into the research that goes into preparing for an audition or a job because I’m so curious about people and I love learning new things that I had no idea could interest me. The worst part…might be the lack of control. It’s extremely difficult to thrive in the unknown, but it just comes with the territory.

This might sound woo-woo, but I approach characters like entities and ask them to help me tell their story. I don’t stir a caldron or anything, but I approach every role with a great deal of respect and try not to force anything. I ask a multitude of questions to piece together a point of view that distinguishes me from the character, and that helps indicate where JJ ends and the character begins. Once I understand the point of view, I explore the world in their shoes. It’s different for every role, but that’s usually a jumping off point. 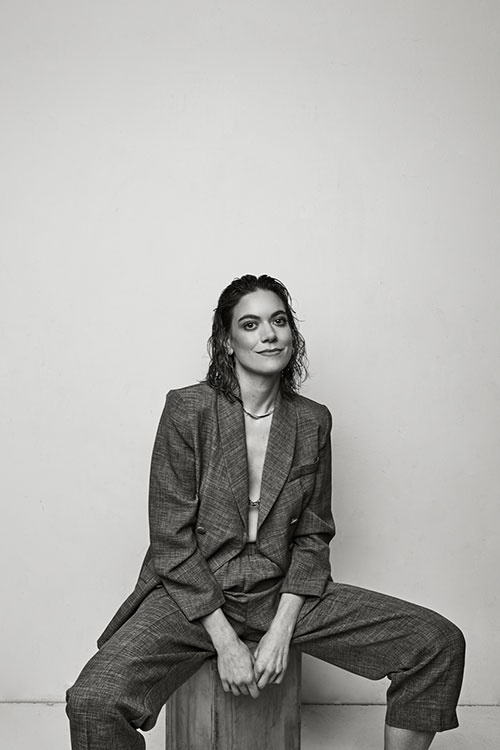 Tell us about your work in the new film “Pretty Problems?”

They did pay me, but it didn’t feel like work. It was like summer camp with the coolest people on Earth. I got to spend every day at this insane property in Sonoma and swim in a gorgeous pool and sit in an infrared sauna. With wine. And friends. And I got to wear couture clothing. Like…what?

And about your character “Cat Flax’?”

Cat’s the best. She’s a toxic billionaire, who is morbidly bored and constantly spiraling on an endless quest to find joy—or at least fill the big gaping hole in her heart. Her boundaries are paper thin, and just when you think she’s cool, she does something so uncool. Everyone in her orbit gets sucked in because she has the ability to change anyone’s life. So she uses that to get close to people and inevitably, everyone who gets close to her ends up getting hurt. Her life is full of transactional relationships, and she’s extremely isolated because of it. But she loves that power as much as she resents it. We call her The Mad Catter because she draws a lot of parallels to The Mad Hatter and she wears a lot of wild hats. And she wears the most impractical clothes and does wardrobe changes like a magician.

I’m very attracted to tremendously flawed, strong female leads. I love fortitude, with a tinge of vulnerability. I also love playing the wacky ones. Some of the most impressionable characters on me have been Dottie in A League of Their Own (my old Jeep was named Dottie); Aileen in Monster; Phoebe in Friends; Nina in All About Nina; and Calamity Jane in Deadwood(Mom calls me Calamity Jayne sometimes because my real name is Jessica Jayne). It almost covers the spectrum of female archetypes, but the one resounding quality they all share is that they’re fiercely independent.

People seriously underestimate how much magic it takes to finish a project. There are so many opportunities for a project to fail, and so many fires to put out along the way—to get to see something through to completion is an incredible feeling. So much work goes into every minute of entertainment. And I love the communal aspect of it. I feel profoundly grateful to get to do what I do.

Oh, man. I could go on for days, but one thing I would say is to remember to find joy outside of acting. Being an actor doesn’t make you interesting—who you are as a person is what makes you interesting. And when it comes down to it, your job as an actor is to be interesting. So I just think it’s very important to lead a full life and take on interests and hobbies outside of acting. Those are the things that will keep you sane when this industry inevitably and mercilessly inflicts pain upon you.

The Tangential Railroad Witch. It’s been said that I go on a lot of tangents, but people underestimate the value of context. So it would be a tangential railroad because there are a lot of detours, but the tangents aren’t going nowhere—they’re definitely going somewhere, but it’s a surprise. And obviously every railroad needs a witch.

Strong is more beautiful than skinny. That’s not to say naturally skinny people aren’t gorgeous, but I was intentionally trying to lose muscle, afraid of getting too bulky. I wasted a lot of time striving for an unattainable (and unhealthy) look. I constantly felt inadequate and like I wasn’t “ready” because I needed to lose ten more pounds. Body positivity was not a concept when I was younger.

I’ve got a few things in the pipeline work-wise: in addition to the release of Pretty Problems, I have another project called Shatter Belt nearing it’s release; as well as another movie and two shorts! I’m also working on a horror-comedy called Invisible Raptor and my character drives an El Camino and has a gambling addiction. Every week brings new surprises, so I really have no idea what will come up by 2023. I just got back from Morocco and I’m really romanticizing the idea of going to Europe in the fall/winter.

What is your favorite healthy food? Does grilled cheese count?

It’s a pretty elusive concept, but I’m pretty sure happiness is a walk in closet and eating pizza in the bath.

Oh Lucile Ball, hands down. She was everything to me growing up, and I would love to pick her brain.

I was very involved in a nonprofit called Young Storytellers before COVID. I mentored kids who were interested in writing, and every week we would get together and work on their script. At the end of it, they got to cast their play with professional actors and see it come to life. There was a red carpet, and their classmates and parents got to come see their productions.

I think it’s destroying society, but I love it. I’m only active on Instagram though, anything more than that gives me anxiety.

Quote: “If you just don’t interfere with yourself, you’re quite interesting.” – Robin Williams

Favorite Food: Pizza and Sriracha are my best friends.

Travel Destination: I took a trip to Heidelberg, Germany before COVID because my mom worked for the army there after she graduated from college. It was magical.