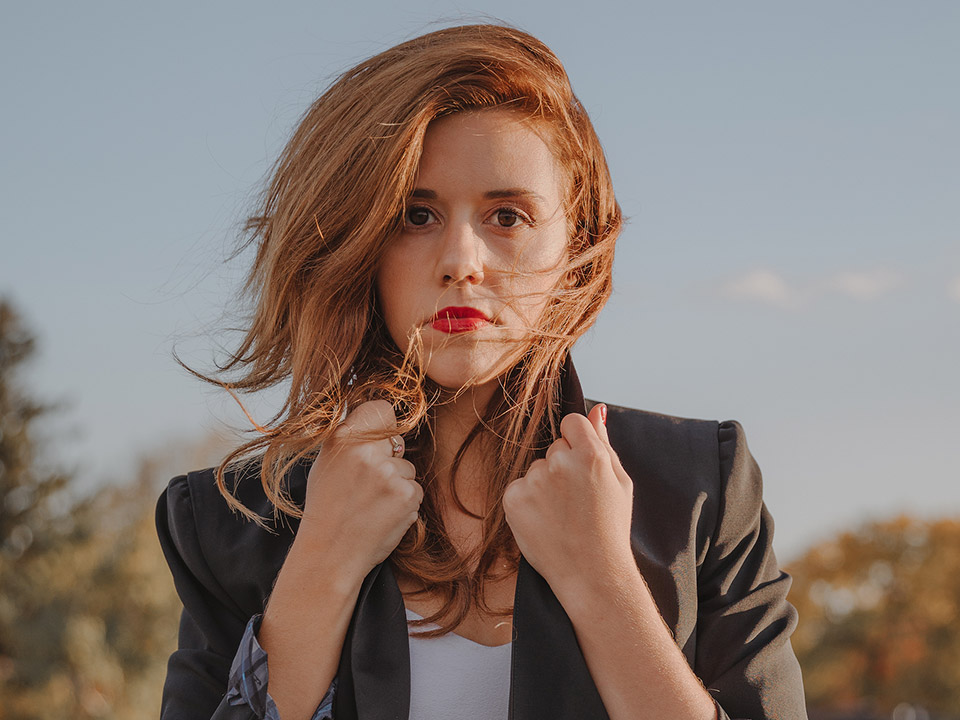 Check out our interview with talented actress Ruth Goodwin who can be seen as Officer Danica Powers in the hit award-winning comedy-drama series Private Eyes season four on Global (Canada) and Ion TV (USA) in 2021.

In addition to her acting, Ruth has recently directed two short films (both in post-production) and at the start of COVID social isolation, she produced a five-episode comedic murder mystery series performed over Instagram Live starring Colin Mochrie, Deb McGrath, Andrew Phung, and Ennis Esmer. 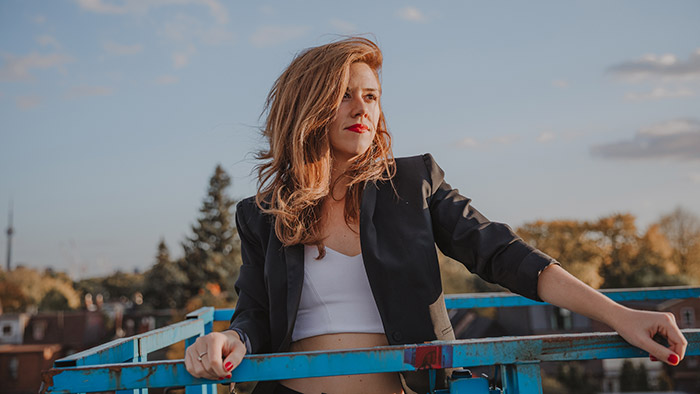 I was always obsessed with musicals and plays (and still am) so when I started high school I immediately got involved with the extra-curricular plays. We did Footloose and Sweet Charity in grade 11 and 12 and I just got bit by the acting bug hard.

I can’t really imagine my life without acting at this point. But I suppose without it I would probably have been much less outgoing and more insecure. I had a lot of learning disabilities growing up (I still do) and dyslexia and even Tourette’s as a child, so it was difficult to really feel good at anything for a long time until I got into drama. That’s where I started to really find my footing and make lasting friendships and gain confidence in my life. I think even if I hadn’t pursued it professionally, drama still would have changed my life for the better and I always encourage people to try it out at any point in life. Take an improv class or join a community theatre production or just read plays out loud with your friends, it’s just such a collaborative and enjoyable art form in my opinion.

What is the best and most challenging part about being an actress?

The best part is the connection you get to have both with the actors and crew you’re working with and with the audience. I love the ability to express an emotion, a situation or a feeling in a story and have someone watch that and think “oh I’ve been through that too’. I have a propensity to feel a bit lonely sometimes and I think the connection we get to experience as storytellers, and the ability to make someone feel less alone, is the absolute best part about this job. There’s a lot of challenging parts of course. There’s obviously not a lot of job security and it’s a risky, subjective medium. But even throughout that, I’ve found what works best for me is to try and constantly be creating my own work either on stage or screen, so that I can have some autonomy over my career and not be fully reliant on waiting for the phone to ring.

Tell us about your work in “Private Eyes.” What can we expect from Season 4?

So this season we have our hands full of new twisty, thrilling, and dangerous cases to solve in Toronto. It’s so fun we’re in a range of different worlds from a Gatsby garden party, to a high-profile celebrity golf tournament, we even go to TIFF ! On the show I play Danica, a newly promoted police detective who Shade and Angie (played by the fantastic Jason Priestly and Cindy Sampson) come to for help with their investigations. My first year on the show Danica was a new, wide eyed recruit, obsessed with the rule book and now by Season 4 she lets her hair down a bit. This season we get to see a lot of Danica’s personal life and how she tries to tackle the one thing she can’t find a rulebook for – romance. Her long-time girlfriend Kate (Supinder Wraich), an intelligent and hard-working journalist, becomes a helpful source during one of Danica’s police investigations, cementing their romantic feelings. But then when Danica realizes she wants to take their relationship to the next level…she has no idea how to proceed.

What is it like working alongside such a talented cast including the legendary Jason Priestley?

It’s the best. Jason and Cindy are such pros and I’ve learned so much from both of them. Jason has been around this industry and medium for so long and on such a large scale, it is so fun to watch him work and he’s a fantastic mentor on the show. He’s taught me so much about the technical ins and outs of filming and is so passionate about this world, it’s inspiring to be around for sure.

I’m getting very into making veggie soups at the moment which are great. And your favorite cheat food? Tiramisu! Although I don’t really call it cheat food, I just call it important food. How would you explain your fashion style? Pre-COVID I would have said I’m quite stylish…during COVID I’d say my style could be best described as “got a little too into tie-dye during isolation”.

What’s next for Ruth Goodwin in the last months of 2020?

We’re shooting Season 5 of Private Eyes right up until mid-December so that will take up most of it! But in the New Year my theatre company, The Howland Company, will be launching some online comedy and theatre content that we are very excited about. Give us a follow on IG @TheHowlandCompany to be updated!

To be surrounded by good people who make me laugh. Also good wine.

Depends on the day! Right now, I’m shooting Private Eyes and developing a few projects so it’s full of writing meetings, pitches and then life on set. Two days ago, I had back to back Zoom meetings and wore sweatpants all day and then yesterday we shot a chase scene for Private Eyes until 2am, just running full speed across the rooftops of Ontario Place in Toronto in freezing rain. And I wouldn’t want it any other way honestly.

I wake up and I’m somehow in Rome with all my loved ones. There is no COVID because it’s over, actually it never happened. I have carbonara for breakfast, lunch and dinner. It’s calorie free. Then we grab a bottle of wine and go out dancing all night because even though it’s Sunday, none of us have to work on Monday. If you could meet someone living or dead, who would it be and why? My grandmother. She passed before I was old enough to know her but I’d really like to have known what she was like.

‘Just breathe.’ – My mother…regularly to me.

Yes I have a few that I am a big fan of, Food Share I think is doing absolutely incredible work right now to tackle issues of food insecurity in Toronto. They connect the issue of hunger with race, class, health, housing and politics and work to find long-term solutions for a food system where everyone has access to affordable, fresh, nutritious food. I also try and support as many not-for-profit theatres/arts organizations as I can, and I encourage anyone who can to do the same. Especially right now during the pandemic so many artists and arts organizations have been hit really hard. Look up your local theatre and see if they are running any sort of fundraiser or find the “Donate” button on their website if you can!

Name 3 things you can’t live without

Air, water, tiramisu (not necessarily in that order).

I would love to be a showrunner.

Right now? In the Room Where It Happens from Hamilton as performed by Leslie Odem. Why? Just listen to it.

I suppose I have mixed feelings about it. It can be a very toxic place for sure, but I think social media has also helped foster a lot of positive growth in the world. It’s been a great tool for political change and has strengthened activism like the BLM Movement and the MeToo Movement and helped give a voice to folks who, prior to social media, were flat out not heard by the mainstream media. So, I guess for me, the benefits of social media outweigh the negatives at the moment.

Quote: This too shall pass.