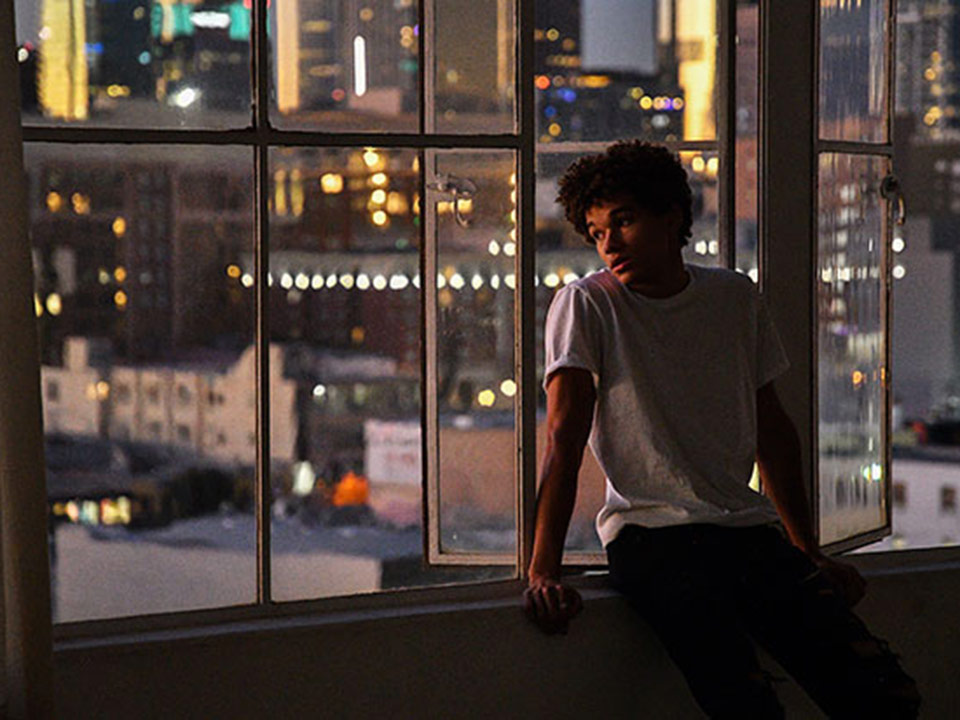 Check out our interview with R&B Singer and Actor Armani Jackson who is known for his starring role alongside Vin Diesel in “The Last Witch Hunter”, Lionsgate’s “Cooties”, and his upcoming lead role as the character “Joey” in the much-anticipated TBS/HBO Max series “Chad”.

Entitled “Out of My Brain”, Armani Jackson’s new single with accompanying visuals is a recollection of the artist’s inner struggle as he tries to get a past love out of his head.  With a captivating hook, a melancholy and masterfully produced beat, and lyrics that capture the true essence of what it feels like to move on after a break-up, this teen is proving that he’s a triple threat and a breakout force in the music industry.

Hi Armani, please tell us a little about you?

I spent my younger years in Wisconsin and then started acting when I was 6 years old. I have a sister that is also an actress and a mom that is a producer. We all formed a production company and now i’ve taken on script writing and pitching shows to studios. Recently, during covid lockdown, I also began songwriting and singing and am involved in a full blown music career now which I really enjoy. I love all things Horror and i’m a little obsessed with escape rooms.

Three words i’d use to describe myself would be Driven, Adventurous, and Honest. I like to be very honest because i feel like it makes things a lot less complicated.

“I’ve been acting for a long time now. My sister, my mother and I moved out to California when I was 6 and started getting some meetings with managers for my sister because originally she was the only one with the desire to act. My sister had signed to a manager and was auditioning and one day after reading lines with her, my mom said I was really talented at reading lines and asked the manager to meet with me. I was terrified to audition in front of the manager so my mom bribed me with a webkinz. I reluctantly went and when I got there, I still didn’t want to go in the room. The manager ended up just talking and had me cold read a scene and then told my mom let’s give him a try. My first audition I got a producer’s session for a major 20th Century Fox role as Tom Hardy’s son and found myself at 6 years old in a room full of big Fox executives and director McG. I almost booked it but then they had to change the ethnicity of the role last minute.

Acting has completely changed my life. Acting is what I’ve always seen myself doing for the rest of my life but now I also want to write and direct some of my own projects. Songwriting and singing has also become a huge passion as well. When I was young i had a hard time talking to people and being social. I think I would have turned out a completely different person without it because it opened me up and squashed a lot of my fears. It definitely comes with its challenges though. I’ve lost so many huge roles that i’ve been inches away from booking and gone from multiple test contracts to losing both roles which can be very hard on a person. I’ve learned to push through though and move onto the next audition and keep moving forward. Songwriting and recording has been helpful because it is something that keeps me busy creating and I can control the outcome more.

The best part about acting is definitely being able to play someone else every time. Some jobs are quite repetitive but in acting there is always something new, always something fresh and different in each job or audition to keep the job exciting. The worst part is definitely losing roles like i mentioned in the last answer. You can go from being up for multiple huge projects and being in the top 2 to losing all of them and going right back to square one. It’s definitely harder in the beginning of your career but you get used to it as it goes on.

Tell us about your starring role alongside Vin Diesel in “The Last Witch Hunter”, Lionsgate’s “Cooties”, and your upcoming lead role as “Joey” in the TBS/HBO Max series “Chad”?

Working with Vin on The Last Witch Hunter was a ton of fun. Who wouldn’t want to be saved from a witch by Vin Diesel. It was my first time in Pittsburg so my mom and I got to go to all the best Pittsburg attractions while we were there. I also got to see Elijah Wood again because he was in The Last Witch Hunter as well as Cooties so it was nice to see him again on a new set. Speaking of Cooties, I had so much fun filming that movie because i’ve always loved horror since a very young age. It was a dream for me to be able to be in that gory horror environment for the months that we filmed and watch how the special effects team and the set decorators do the makeup and props for a horror film. One of my co stars in Cooties was actually Nasim Pedrad, the creator of my new TBS show CHAD. It was so much fun getting to work with Nasim again. This is actually my first comedy that I have done. I play Joey a nicer kid to CHAD more than his peers. He’s part of the friend groups that CHAD wants so desperately to be in. Joey is definitely the nicest to CHAD despite all of the very unforgiving things he does. Filming Chad has been a blast because we’re all able to kind of improv our lines and scenes and come up with our own lines most of the time and utilize our own comedy and not have to just stick to a strict script. Often, it would take us a very long time to film a scene because someone would break and burst out laughing because of how insanely awkward some of those scenes are.

I love working with new actors and meeting new people on set. Working with Nasim Pedrad and the whole cast on Chad was obviously a blast. They did such a great job casting for this show. Jake Ryan is so perfect as Chad’s best friend. I couldn’t imagine a better cast. It’s funny to think Nasim went from playing my teacher in Cooties to playing a much more inferior kid to my character in Chad.

To prepare for a role i do many things. If the show or film is based on an existing story, I’ll read up a ton on the story and watch as many documentaries or you tube videos as I can revolving around the subject. If it’s a remake, I’ll watch the originals. And if it’s new, I’ll work on submitting myself to that character and really gauging how it would make me feel to be that character, to be able to take the situations that happen to my character and find out how I would react to those situations rather than trying to become someone I’m not. That’s something I do with every role but most importantly when I don’t have any existing version of the character to work off of.

One of my favorites was definitely Little Boxes which was a Netflix Original film I played the lead role in. It filmed in New York so it was a lot of fun to be in a new place since most of the stuff I had done previously filmed in my hometown of Los Angeles. The film got into the Tribeca Film Festival so it was tons of fun going to all of the premieres, Q&A’s and Red Carpet interviews. Many people also remember me from Grey’s Anatomy as Braden Morris, the Bubble Boy.

I love a24 films. Those films are among the best of the best. I think playing a role in a horror a24 film or even any a24 film in general is a huge goal for me. I’d also love to be in a Jordan Peele or Blumhouse movie too.

Now on the music side, describe your sound in 3 words?

I think the best way to describe my music style would be Alternative Melodic Rap. I’m honestly still figuring out what genre to call myself but i don’t think that’s very important right now. I like to make different genres of music before submitting myself to one style.

Honestly, I don’t really get nervous. Sometimes I get a little jittery before a network test but it’s mainly if I really want the role. But i think it’s good to be a little jittery because when it’s time to audition, I use that energy to put everything I have into it. I never let that feeling hinder my performance. When it comes to music, I used to be really really nervous to make music and put it out but the more I started writing the easier it became.

Tell us about your new single “Out of My Brain?”

I wrote Out Of My Brain during quarantine in 2020. I wrote about the feeling of wanting to get the memories of a past relationship out of your brain and work on moving forward with your life. I think it can be hard to go forward when a huge change like ending a long term relationship occurs, but you really have to just keep going and try hard to not think about it. Out Of My Brain was definitely the first song i made where i was extremely happy with the end result and fully figured out the song writing process. I also make all of my own melodies on the songs. And every song I’ve made since then I am super proud of and I can’t wait for everyone to hear. I think a lot of people will be very surprised with the progression of my songwriting, especially the new stuff I’m working on.

I’ve definitely been inspired by artists like Lil Peep, The Kid Laroi & Kid Cudi. They’re definitely doing the right thing and I love the music they put out. However I wouldn’t compare myself to a certain artist because I want to do something different and not just try and do things like someone who already exists.

Any advice to other entrepreneurs?

I think if I had to give advice to people who want to start acting or singing is really just to stay consistent and work hard. You can’t get around not working hard. Don’t focus on people seeing your work or having a lot of followers, because they will find you if you are doing good work. My advice to entrepreneurs is always make steps in the direction you want to end up. See the end goal, and every day make a step towards that end goal and before you know it, you will be half way there or all the way there. Don’t just talk about it, make steps to do it. But also, don’t neglect yourself which is a big part of being successful.