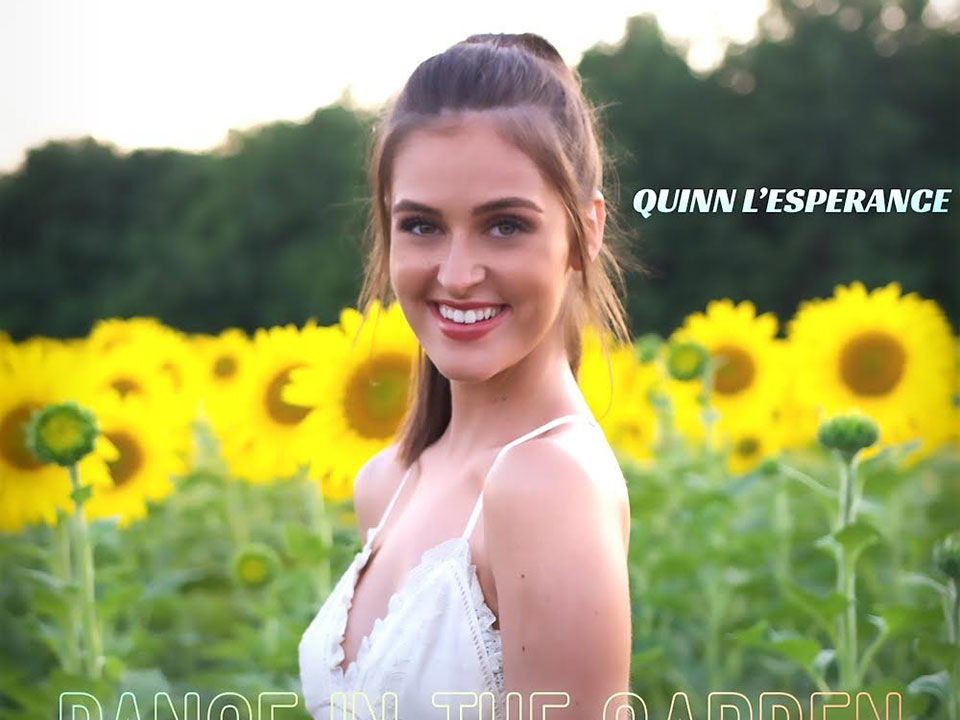 Check out our interview with singer, actress and Autism advocate Quinn L’Esperance who just released her new single and video “Dance In The Garden.”

The inspiration behind “Dance In The Garden” came from a saying from Quinn’s Dad: “Connor lives in the garden, we live in the world. We have the ability to come in and out of the garden, but Connor gets to experience the beauty of just the garden.” Through this message, Quinn wanted to write an empowering anthem for Connor and others like him.

Quinn has teamed up with the autism advocacy organization Autism Speaks and performed at their virtual walk in Cleveland, OH in support of their work in promoting awareness about autism and creating a kinder, more inclusive world.

Hi Quinn, please tell us a little about you?

I was born and raised in Cleveland, Ohio. My family and friends are the most important things in my life. My brother Connor is autistic.

We’re sure you have been asked this a million times but how did you get in to the industry?

I was actually a competitive figure skater growing up and have always loved performing. When I was 11 years old, I hurt my knees and had to stop skating. The time off the ice allowed me to pursue a passion for performance that I’d always had, but never had the time to try, which was musical theater. I’ve been pursuing a career in TV/Film and music ever since!

I think Vanessa Carlton was the first female artist that I ever looked up to. I remember her CD playing whenever we were in the car and quickly memorized all the words to her album “Be Not Nobody.”

I occasionally get nervous, but I think it’s more excitement than nervousness.

Tell us about your new single and video “Dance In The Garden?”

This song was actually the second original song that I had ever written and has since been
rewritten six times. It’s a song I wrote about my brother Connor and the common
misconceptions people have about the special needs community. This video is extra special
because my brother Connor and his friends actually got to star in it with me. I had such a fun time on set working with Connor and his friends just dancing and having fun in the garden. Connor truly shines in this video.

My dad has a saying in which he says, “Connor lives in the garden, we live in the world. We have the ability to come in and out of the garden, but Connor gets to experience the beauty of just the garden.” Through this message, I wanted to show people that the spectrum widely varies and that we all see the world in our own, special way.

Now tell us about the success of your other singles “Heavyweight,” “Human Connection” and “Unstoppable?”

My previous singles are such fun pop songs. They all touch on the message that I want to
promote as an artist, which is to spread positivity and inclusivity. It’s now more than ever so important to lift people up. Music is the perfect way to do so.

Over the first few months of quarantine, I had been doing Facebook and Instagram live
performances every Tuesday night. It was something for my family and I to look forward to and then I built a fanbase of people that kept returning to watch each week! It was honestly so much fun and I’m so glad I did it. It definitely helped keep me sane.

I really want to collaborate with Jon Bellion one day. He’s my all-time favorite artist and
songwriter.

I love being a role model and inspiring people through my music. If I had to say something that isn’t rewarding, I would say that it’s hard to please everybody because someone is always going to have an opinion about what you’re doing.

In 2021, I am focusing on myself and creating true and honest art through music and acting.

This is such a tough question because I have so many favorite songs but right now. I think it’s “Love Dad” by Harry Hudson. Whenever I listen to it, I just feel connected to my family.

I love acting just as much as music. I also love cooking, practicing yoga, trying new things and going on adventures with my friends.

If I’m feeling really motivated, I get up and work out. I feel like that always sets my day up for success. Then, I plan out my day and all of the things I want to accomplish. Sometimes I’ll have a full day on set, or a vocal coaching session or writing session. It all kind of varies.

I am an empathetic leader.

Sleep in, wake up and go to the beach.

I would say that happiness is accepting the love and energy that is around you and returned to you by those you love. It is allowing yourself to enjoy the little things in life and to appreciate how they make you feel.

Supporting charities and nonprofits is one of the things I find most important. I was actually able to collaborate with Autism Speaks on the release of “Dance In The Garden.”

My family and I have also started a nonprofit in Connor’s name called “Connor’s Hope.” Our mission is to assist young adults with special needs by providing access to goods and services to enrich their lives and bring fulfillment and joy.

My diet is really all healthy foods. I love fruits and veggies.

I like fun, easy going, driven people. If you aren’t driven or ambitious, you probably won’t hear back from me.

I see myself on a successful TV show while simultaneously working on films. I would also love to go on tour prior to the release of an album.

I would say my style is boho chic.

I love all the opportunities that social media has to offer. You can reach so many people through promoting your craft. However, it can also be really toxic. I try to use it in the most positive way possible.

Favorite Quote: “If it wasn’t hard, everyone would do it. It’s the hard that makes it great.” Tom Hanks

Favorite Travel Destination: Hawaii, but I would love to travel to Europe.