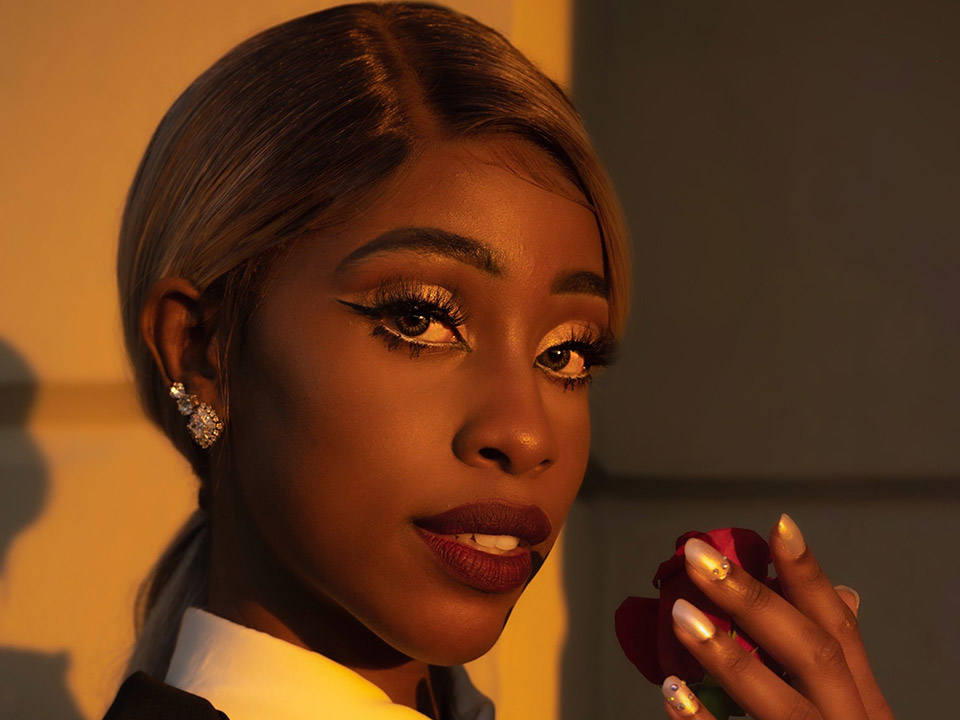 Check out our interview with multi-talented singer, songwriter, and dancer from New York  Chantel Nicole. Starting her creative career as a background dancer and choreographer, Chantel started making a name for herself while appearing on popular Youtube segments and magazines and K-Pop outlets. She has made appearances on

Her first set of 3 singles intrigued fans and critics alike, giving them a taste of what was in store. Recently, her TikTok has skyrocketed with teasers to her new single while building an authentic and engaged audience of music lovers.

Chantel Nicole’s latest single “Here I Am” released on July 16th, 2021 is the single from her unreleased project, “CHROMA,” which will serve as a palette for her mix of genres in Pop and R&B. The single was originally a K-POP demo crafted under the tutelage of singer-songwriter Rodnae “Chikk” Bell. After completing the track Chantel knew this piece of work had to be on her project as it incorporates the multi-faceted nature of her personality and creativity.

Chantel Nicole - HERE I AM

I got started background dancing/singing in college. I was okay with being in the background until I wasn’t. I wanted to write my own song and perform it and I felt that I was ready. After four years of college life, in 2017 I released my first single and that was the start of the #CNICRoute

Well, it has made me feel beautiful, confused, and accomplished. Working in this business will make, shake, and break you just see if you can handle it. Granted, I’m in the little leagues, but the quality of emotion remains.

As I take of stock of everything, I can say that the business has changed my life for the better.

My introduction into this business has been as an auxiliary character. Background dancing, singing and even working as an intern for companies in the industry. I conducted myself with two intentions:

I wanted to have fun and also wanted to learn. Those two motives resulted in me being seen as a pleasant co-worker/team member/ business person and me learning to tips and tricks of the industry. Now the side-character has her own spin-off.

As a former background dancer, the dancer-turned-singers-slash-dancing-singers inspired me. That’s Janet Jackson, Paula Abdul, J.Lo, BoA, CIARA, and Britney Spears. I have more but those are the main ladies that you can see and hear in my music.

I chose to make music because I felt that the words I wrote needed to be heard. I feel the most beautiful when I am performing and being myself. Music allows me to do that! 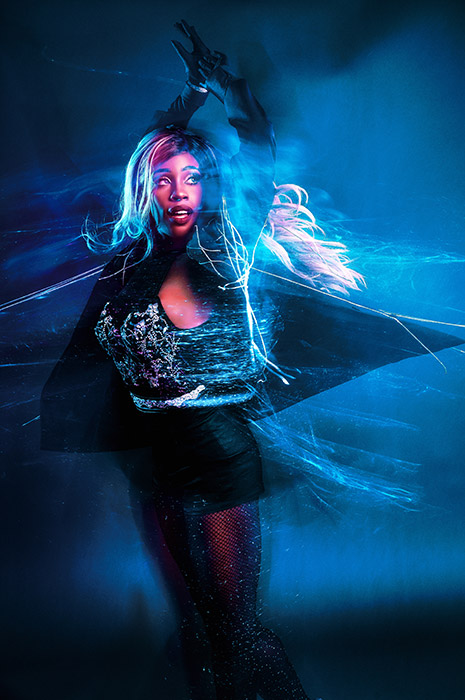 No, I do not. I have an interest in learning for sure. I want to learn the bass and drums one day.

In the past, I used to be extremely nervous about performing. Early on, I had a feeling that a lack of preparedness and vocal technique impacted my nerves a great deal. Now, I feel nerves both good and “bad.” I feel excited about the opportunities afforded to me, but sometimes I worry about the reception of the performance.

Tell us about your new single “Here I Am?”

The idea for the song was inspired by the childhood animation, Sailor Moon, and I take on the role of the “Damsel in This Dress,” ready to save someone from a broken heart. The track is sultry, dynamic, and keeps listeners guessing. It’s written in K-pop style as it was originally for a girl group. As the production builds, new musical textures are introduced and the energy keeps building. It’s really become a fan fave!

In 2020, I was mentored by one of K-Pop’s well know contributors, Chikk Bell. She has written several lead singles for South Korea’s biggest boy band, EXO. She offered a collection of productions that were created with K-Pop in mind and told me to write two songs. I did and “Here I Am” was a result of that. A friend of mine heard the demo of the song and suggested I keep the song and I did and now I have one of the best songs I’ve written as a part of my catalog!

When someone enjoys my work and then becomes a supporter. I don’t know if that sounds selfish, I only know that it feels good when someone picks up when I’m putting down. Catching someone’s eyes is eyes, capturing their hearts is something special. 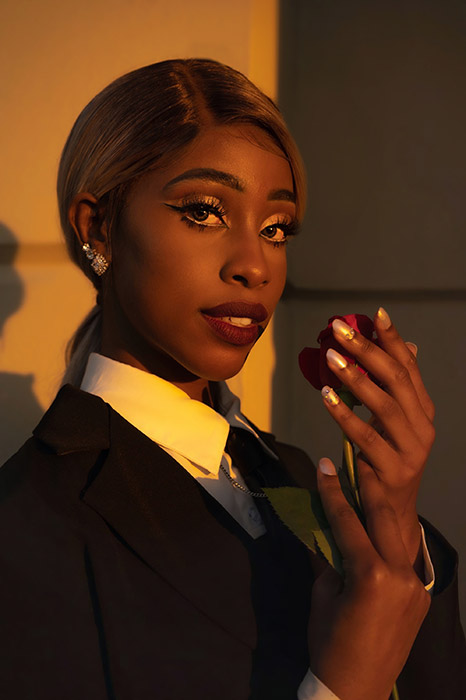 The Art of War by Sun Tzu

I learned to use or lose my fear. It is okay to be afraid. The trick is to not let it hinder your progress. If you are a scaredy-cat like I am, use it to propel you forward! I am afraid of failure, so I work hard so that I don’t fall into a life I just “settled for.” What are you afraid of? Why are you afraid of it? What’s the worst that will happen? You will always lose if you choose to not play.

You are considered brave when you overcome a fear or face it head-on, right? So do the thing! DO IT or lose it.

Another thing I learned is self-acceptance/knowing oneself. Without it, you are always going to be a victim of others’ projections.

I think my best friend would say that I’m someone who is always there for her, that I’m a goof, “one of the healthiest people” she knows, and a hard worker.

The title would be, Baby, I’m a Star. My first dance company performance in 2000-something was to the Prince song of the same title. The lyrics have always stuck with me. Don’t even get me started on the reversed audio in the beginning. Mr. Rogers Nelson was speaking facts.

“Hey, look me over/Tell me, do you like what you see/Hey, I ain’t got no money/But I’m rich on personality/…Might not know it now/Baby, but I are, I’m a star (Star!)”

I’ve not had a lot of money, but I’ve invested time and energy in my work and it shows! You might know me (or my worth) now, but I do and I shine, baby! I’m a star and I want to light up your life.

Well, she is going to finish her mini-album CHROMA! Or at least, that is what I expect. I’ve saved up money for studio time, so I’m hoping for a more expedited process! In 2022, I am expecting to perform live! I’m preparing live versions of my song, new and old and I cannot wait to get out there and show myself!

Ooh, good question! I recommend a Buffalo, Veggie chicken wrap. I use bleu cheese, celery, and lettuce as I make it, so it has flavor. It’s my go-to honestly and it’s super easy to make.

McDonald’s. Truly. I have the app and I’m sitting at 11K points.

Mood. However I feel, is how I dress. By default, I tend to dress like a dapper tomboy–think Ellen, but swaggy like Jidenna

Doing what I love. Being able to live in (what I consider to be) my purpose. People come and go, but I will always have Chantel. Being her, loving her, and treating her well makes me happy.

Good question. No one comes to mind, really. I’ve met some people I respect and all I did was offer accolades and adoration. I learn by example really, so I wouldn’t just ask questions.

For the sake of collaboration or even just friendship, I’d like to meet Janet Jackson, Bree Runway, Rina Sawayama, or Little Mix.

“Make the music you want to make.” To female rappers within the same year told me to do this after I expressed nervousness about releasing my first single. Shout out JLynn and Dizzy Senze.

Honestly, I do not. Financially, I do not provide assistance. This does not mean that I do advocate for women’s rights and the prosperity of minorities. I volunteer and do some outreach when I can. Some of the posts are archived now, but honestly, I don’t engage in performative activism, so I do know how to “prove” that I care/support.

What I do is invest in is other artists. They know what I’ve done and what I do.

Where am I after 5 years? Well…

I am touring, making more music, and acting! I am doing what I did in 2021 but on a larger scale. I am on Billboard’s Hot 100 for the umpteenth time with one of the top 10 singles! My fans, my Wings, and I will #taketheCNicroute by celebrating award wins and making beautiful memories together.

On a personal level, I’ve paid off college debts, helped my parents live comfortably, I’ve finally got my own place and I’m with someone special (but no one really knows who he is because I’m not posting him on social media).

A favorite song? Like ever!? I listen to rock/metal, Pop, Rap, and R&B so the catalog of faves is vast. For me, my fave song captures the zeitgeist of where I am in life, so choosing one is tough.

Honestly, my favorite song is “I MISS U” by me! Sad girl autumn has swept me up and I’ve been listening to that song non-stop.

Social media is great! It’s been how I’ve made connections and learned about new things. I believe it becomes toxic when we delve into those environments that generate feelings of envy, hate, and self-doubt. People invest time in drama and leave comments just to argue about celebrities that don’t care about us. People follow influencers that make them feel great deals of FOMO, but if it isn’t inspiring you or making you feel good, unfollow that person. Don’t compare yourself to them.

I have a universal link that readers can use to access all of my social media, music platforms, and endeavors! https://linktr.ee/ms.chantelnicole

I look forward to e-meeting you all. Be sure to reach out so that I can speak with you!

Travel Destination: I’ve never been outside the country. I’d love to visit Santorini in Greece.

Sports Team: The Toon Squad? Haha, I don’t have one. I watch sports without any particular allegiance. If I’m watching with my dad, I pick an opposing team just to have some friendly competition.