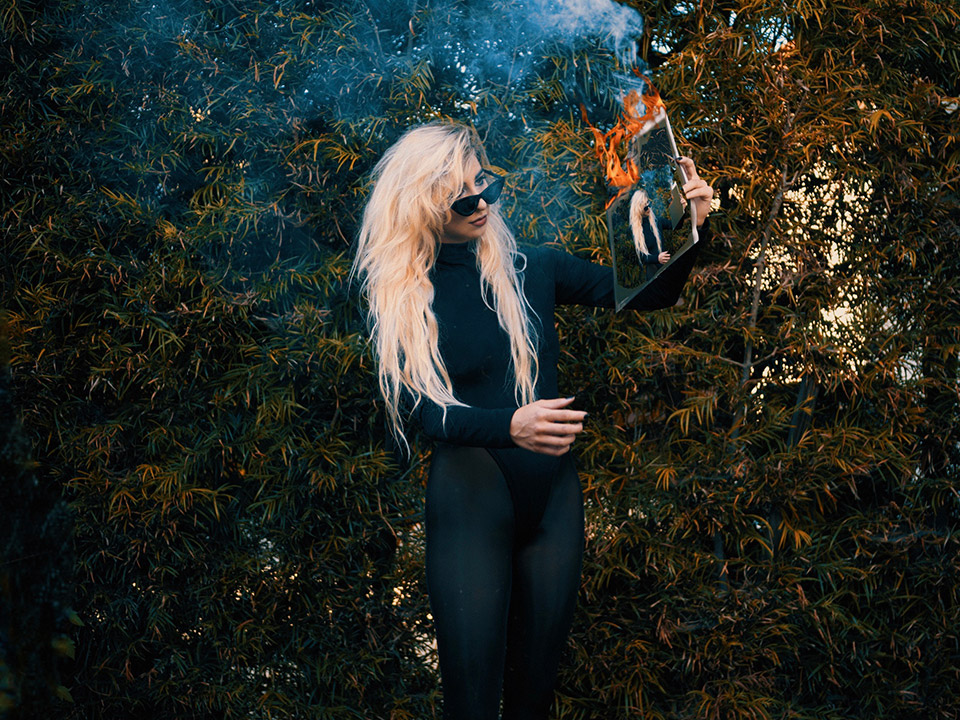 Check out our interview with Los Angeles-based singer/songwriter/classically-trained pianist and model Alexa Villa who has played on The Warped Tour and has opened for acts including The Darkness, Drake Bell, Ryan Cabrera, and Mark Ballas & BC Jean of Alexander Jean to name a few. Alexa just released her new single “Invisible – Dan Heath Orchestral Reprise” the song details Alex’s personal experiences in surviving unrequited love, power plays, and unhealthy relationship dynamics that leave a partner feeling alone and used.

The singer/songwriter/classically-trained pianist is also a model, working with several fashion companies and regularly participating in events at L.A. Fashion Week.

I grew up in a musical family. They always encouraged me to chase my passion.

I’ve had a love for music for as long as I can remember. I come from a musical family, parents that met in a band, a brother that plays guitar, and grew up around live music. I started taking piano lessons at 7 and have been writing ever since. From there I started a band at 16, and eventually started my own project. It’s really the people in my life that have gotten me to the place I’m at and the music I am making now is the most honest its ever been.

My latest release is called “Invisible (Dan Heath Orchestral Reprise). This is a song that I wrote with my guitarist, Dre DiMura, one rainy day after a show we played in Hollywood the night before. I had just gone through a break up and we were painting our toes and chatting about it. He pulled out his guitar, strummed a few chords and the words just fell out. We wanted to keep it simple and raw with this one to match the sentiment. Bringing us to now, it landed in the hands of Dan Heath who has worked on many of Lana Del Rey’s greats and he has, in his genius way, remixed it, adding in this beautiful blend of strings.

It was inspired by that breakup. By exiting that toxic situation, I was able to regain clarity, power, and freedom.

Tell us about your experience opening for big name artists like The Darkness, Drake Bell, Ryan Cabrera, and Mark Ballas to name a few?

I treat every show the same. Even when there were only two people in the audience, I’d sing like I would if it were one of these shows. So when these opportunities showed up I was so ready. The Darkness show is one I will never forget. I remember sitting on my Mom’s couch when I booked it, then sound checking the night of. The energy was unreal and I felt so grateful to be able to connect with so many people in one room.

Music, beach, ice cream, family, art. I might’ve said make up but that falls under the art category, right?

I am so excited for what’s to come! I have a brand new EP on the horizon. At this point I actually have enough songs for an entire album and then some so we’re in the process of deciding which ones make the cut! A good problem to have!

I have so many favorite songs! If I HAD to choose, I would probably say The Rain Song by Led Zeppelin. That’s my favorite band and there is never a time that I don’t want to listen to that song. I’d never hit skip, that’s how you know.

I love creating in general. I love making things out of nothing and playing with colors. Usually if I’m not doing that, you can find me at the beach.

Don’t be afraid to make a fool of yourself. And always keep writing. Both come from my Dad.

You just have to be the last one standing.

Morning stretches, turn on the keyboard, make coffee. Three musts. Then depending on the day, I’ll be in the studio, writing, or shooting into the night. And (pre lockdown) I’d usually go to a live show around 10pm and be awake until about 3am every night.

My perfect Sunday starts at the farmers market, fresh berries and sunshine of course. I’ll spend the afternoon in a bathing suit sleeping on the sand and swimming in the waves, Sweetgreen and writing music or performing to cap it off. Happy girl.

Rock and Roll by Led Zeppelin, or I Have Nothing by Whitney Houston. So much fun singing my heart out to these two!

My definition of happiness is doing what I love with the people I love.

For a moment I was involved with Not For Sale, who fight to end modern slavery and exploitation. I’d love to reconnect. This kind of work is something I want to dive deeper into.

Bad hygiene and zero sense of humor. Got to have a laugh!

My fashion style is a cotton candy, sweet and salty blend of colors and every icon I’ve been inspired by. I love bending rules and fusing worlds. I like to be edgy with a little bit of sweetness. I want it to say, “don’t mess with me” but also, “hello how are you lets be friends?”

Quote: Art is never finished, only abandoned. This has helped me more than once. And also Cher’s, “Mom, I am a rich man.”

Movie: He’s just not that into you. I’m a sucker for a good romcom.

Travel Destination: So many destinations! I’ve always wanted to see the city of Petra and the Dead Sea, also Spain where part of my family is from, Paris, Santorini, Thailand, so many.