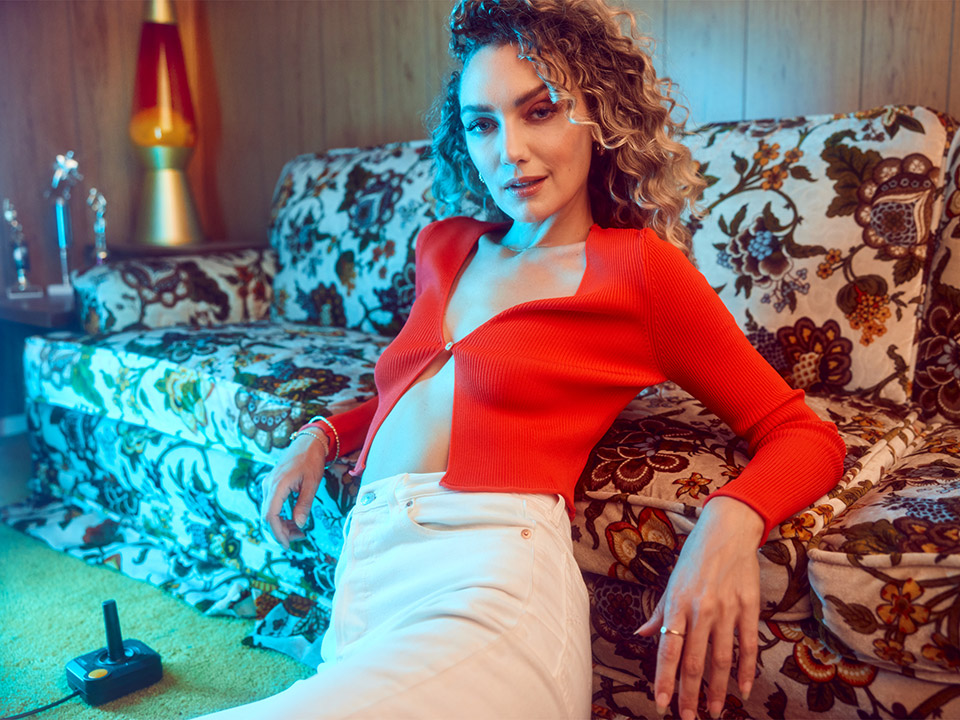 Hannah plays Christine Woods, Code’s live-in girlfriend who works in real estate and isn’t a big fan of Lisa and her destructive energy. Code is Lisa’s ex boyfriend-turned-bestie who has a couch for her to crash on when she comes to L.A.

I took drama classes when I was young. But I wouldn’t say I loved it. I remember being affected by the adrenaline of being on stage. In front of people. And the rush of feeling big emotions. But as I grew into my teens and started watching more movies, I just loved being so affected by the story and characters’ emotions. I really wanted to be able to do that. Affect an audience and tell a story. And so… I started taking classes more seriously. And then I auditioned and went to drama school after high school.

I can’t imagine my life without acting. I’ve been doing it so long, it just feels like it’s always a part of me.

Best: collaborating. Discovering things about a character and the story that surprise you. Working! Working is good!

Challenging… not working (haha!). Auditioning and rejection can be very tough and can really wear you down. Learning to manage that rollercoaster is incredibly hard.

Honestly it really depends on the role and how much I know about a character at the outset of a project. For film/tv, sometimes your character is still being developed and written as you are filming. I definitely mix it up. I’ll spend time on the material, with an acting coach. Breaking scenes down, mapping it all out. But then I try to get in the character’s body and live some of their experiences. With Brand New Cherry Flavor, I did a ride along with a friend who is a real estate agent haha. We went to a few open houses and I observed everything. It was fun! I also had an animal persona for my character (a flamingo) and certain songs I would listen to on set (Maniac by Michael Sembello is one of them – hahaha!). It all helps flesh it out for me and makes the process one of discovery and surprise.

Brand New Cherry Flavor is based on the novel by Todd Grimson. The premise is: A filmmaker (Lisa Nova played by Rosa Salazar) heads to Hollywood in the early ‘90s to make her first feature film, but tumbles down a hallucinatory rabbit hole of sex, magic, revenge – and kittens. I play Christine Woods, an Australian real estate agent living in LA and dating Lisa’s ex boyfriend Code (Manny Jacinto “The Good Place”), a kind, designer drug dealer. Christine becomes Lisa’s unlikely friend and co-conspirator in her revenge mission. The series is a wild ride… it’s really a total trip, and on-set we all just had to commit and jump in. It felt like we took a lot of risks… but that’s an exciting space to work in!

I think more than any particular type of role, I really like good writing. Having lots of clues about who a character is in the material. And threading them together. I’d love to play a role where I had to learn a new skill – like boxing, ice skating… a new language. I think it’s an interesting way to step into a role.

Collaborating with the creative team. Bringing everyone’s vision together – together. No department exists without the other in filmmaking. It’s such a fulfilling experience.

Focus on learning your “craft” and on understanding & learning about “the industry” and to an extent. But then get out there and start doing it. We learn by doing. Make your own stuff. Really let yourself love what you do. The most precious thing you have is your own voice and your own autonomy. Don’t let anyone take that from you! And don’t give it away.

Trust in the timing of things. Learn to be kind to yourself, and hold yourself accountable. Sounds simple… but it isn’t (haha!).

Warm, generous, a connector of people… always late! (It’s terrible but it’s true!). I have terrible time management! Someone help me lol.

The Mind is Outside… It’s a mantra that I think summarizes my polarizing fear and curiosity of what is beyond the things at the forefront of my mind on any given day (haha!).

I have a sci-fi feature film in development with Telefilm Canada. It’s based on a short film I wrote and acted in called Hunting Season. We played a lot of film festivals through 2019 and had such a great response – we’re turning it into a feature! And hopefully some travel! That would be nice!

Honesty, love and acceptance of oneself.

David Bowie. He was such a creative genius. And my first crush haha.

I see myself happy, surrounded by good people, hopefully with a dog and good projects in the van and on the way. I’d love to segue into directing at some point too!

Rebel Rebel by David Bowie. Because he’s… David Bowie lol. That song always gets me riled up to take on the day! And the lyrics are so fun and surprising.

I think at it’s best it’s a fun, creative outlet and a way to connect people. And it’s worst, it’s brain-draining and addictive and can be downright nasty. I try to keep a healthy attitude about it and have fun with it.