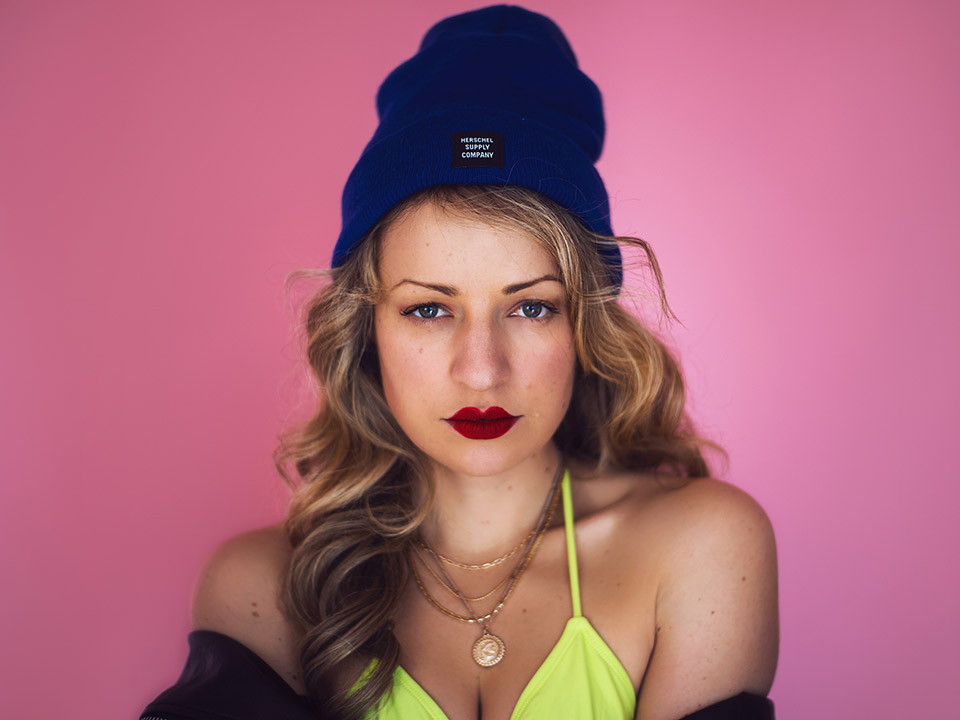 BARBELLE follows the story of a newly famous Toronto based pop-star duo, Veronica Vale and Alice O’Hara, whose meteoric rise to stardom has led to a blitzkrieg on their personal lives.

With over 4 million views to date, season two of BARBELLE serves up the series’ classic flare and humour while rounding out the story with the timely exploration for some of 2018’s most vital topics: The #metoo movement through a queer lens, adversity facing women in music industry, and the nasty effects of an over-curated digital identity on the psyche.

Hi Karen, please tell us a little about you?

I’m a filmmaker and artist living in Toronto. You might know my work from the series BARBELLE where I play a jaded lesbian pop star with a heart of gold. If you’re a gamer, you can play me as SHAID in Ubisoft’s Starlink, she’s an all sass space pirate bounty hunter. I’ve also written/directed some short films that have played festivals including TIFF, Canadian Film Festival, Venice Short FIlm Festival, and the Grand Budapest Film Festival.

I do a very impressive re-telling of the Biblical story The Ten Commandments. It’s lit.

My creative partner who I’ve been working with for the past ten years, Gwenlyn Cumyn. I really don’t know how I would function without her!

As an actor I did the traditional route. Small town community theatre plays, then some nerdy ass time in the high school drama club, then drama school (I went to LAMDA in the UK). After all that, I realized I wanted to work creatively as more than just an actor. Instead of getting a degree in writing or film, I took the school-of-life route and self taught. School of life is interesting. You cry more, but it’s less expensive.

The first one I remember vividly was Gollum in an adaptation of Tolkien’s The Hobbit. It’s still one of my favourite roles. Parts where you just get to look straight up UGLY are amazing. It’s actually SUCH a job having to look beautiful on camera. I’m serious. If I have to act AND try to look nice I’m doing TWO JOBS. When I’m playing parts where I don’t have to “look nice” I get the luxury of only focusing on the acting.

So many. So so many.

I’m not very good at that. I find the two cross over at an extraordinary rate. They can be very difficult to balance. I don’t know that, that always a bad thing either.

If you are undertaking a massive endeavour like making a series or writing a feature, don’t let the big picture overwhelm you. When you wake up, just ask yourself, what can I do TODAY, literally JUST TODAY that will help me get my series made. The Big picture can be crippling if you let it dominate your trajectory.

Honestly, I just say the words, a lot, out loud, as much as possible until I like the way they sound.

Now tell us about your award-winning short form series “BARBELLE” What can we expect for the new season?

BARBELLE is the show I created along with Gwenlyn Cumyn. The first season was released about a year ago and you can watch the first season on Revry, Amazon Prime, Bell Fibe TV1, and KindaTV. We like to refer to the series as the Gay Soap Opera of your dreams with good jokes, or if you prefer, a woke lesbian spiceworld for 2019. Season two is a hot magic mess of drama & music. I cannot wait for it to drop.

I have two dream rolls right now. One of them is basically me doing a remake of the not excellent 2005 BBC adaptation of Casanova starring David Tennant where I play the gender swapped title character. My other one is Snape. Yes, Harry Potter Snape. I have this obsession with “double agents.” Characters who are seemingly the bad guy, but really THEY SUFFER FOR THE GREATER GOOD. I want to play a character like that.

I’m working on a series called For the Record right now in association with Universal Music and Ithentic. It’s filming this spring! Gwenlyn and I are also working on getting our first feature made called MemeLord.

Oh man. That’s a huge question. I’ve always loved classical. LATELY here are just a few artists I been grooving on. Bille Eilish, Cartel Madras, Leikeli47, Teyana Taylor, Emily King, Toro y Moi, Marie Davidson. But I also know like every word to the Hamilton soundtrack. Go to karaoke is some TIGHT Phantom of the Opera.

I actually hate Sundays. Tuesday is my favourite day of the week because Tuesday is the day people send you emails about “future projects.” It’s the day of 6-months-down-the-line-prepping.

I have a twin brother.

Being on the treadmill and having an original thought.

Fave shows of the past little while include: Fleabag, Killing Eve, High Maintenance, Paul Rust’s Love, Handmaid’s Tale, and The Bisexual.

Song: Anything from My Chemical Romance’s Three Cheers for Sweet Revenge