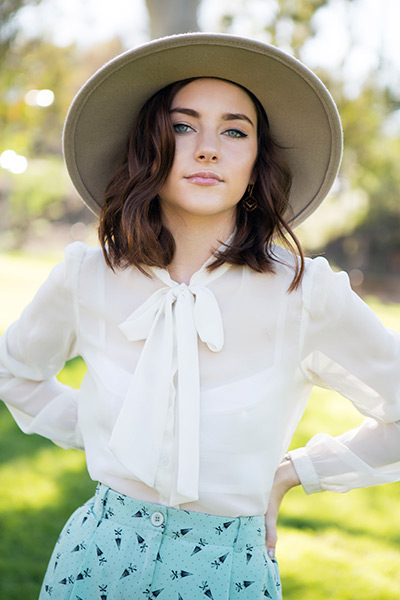 Haley has been making a name for herself over the past 12 years as a result of her work in film and television. At only 22 years old, Haley has already worked with Hollywood veterans such as Jodie Foster, Sean Penn, Halle Berry and Hugh Jackman, and this list continues to grow. Her innocent beauty coupled with her gritty roles makes her a standout among young Hollywood, last year Haley  took her talent to prime-time with co-stars Italia Ricci and Mary Page Keller in  “Chasing Life.”

“Chasing Life” follows ‘ her sister’s illness who is trying to balance her career and family, and discovers unexpectedly that she has cancer.  Haley stars as ‘Brenna,’ the rebellious teen sister of April.  Ramm’s character will no doubt push the envelope on the show as ‘Brenna’ struggles with her sexuality, school and her secret sister ’Natalie Ortiz’ played by Jessica Meraz.

On the film front, Haley has captured audiences in DISCONNECT (2012), INTO THE WILD (2007), X-MEN: THE LAST STAND (2006), and FLIGHTPLAN (2005).  Most recently, she wrapped independent films, DAKOTA’S SUMMER [in which she stars as ‘Dakota Rose’ with Emily Rickards and Marin Hinkle],  IMAGIGARY [directed by and starring The Middle’s Charlie McDermott], and VICTOR [with Khleo Thomas].

Haley, a budding fashionista, enjoys vintage shopping with her mom for pieces that they sell in their online store. Her favorite style decade is the 1960s and she enjoys mixing retro inspired accents with current trends. 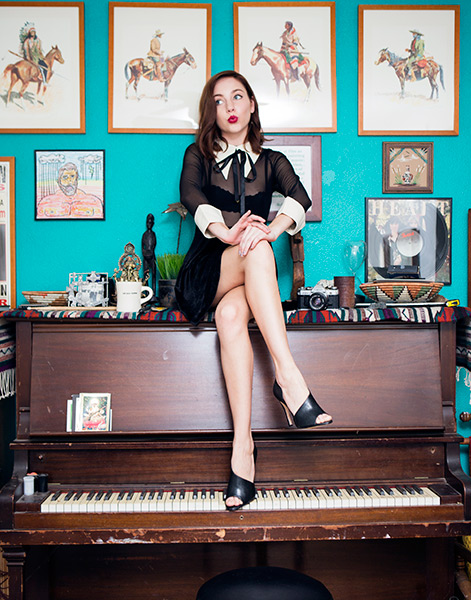 Tell us about you.

I was born in Texas and moved to Los Angeles when I was 11. I loved acting and performing and my parents really believed in me. I made the trip with just my mom and eventually my dad and brother moved out as well. There used to be hundreds of parents and children coming to LA every January for Pilot Season but I was blissfully unaware of this when we moved. In Texas there wasn’t a huge amount of competition for the smaller projects that are filmed there but this was a whole different thing. In Los Angeles, thousands of submissions are made for one part and only a few get called in to read for it. I am thankful for being a little bit naive in the beginning.

How long have you been acting?

I think I had my first real acting job at 7 or 8 years old. It was a horror film and I loved every minute of it. I even let them put Madagascar Hissing Cockroaches on my neck for a scene. I was all in even as a kid.

What do you enjoy most about acting?

I learn something new with every role. And I love being around creative people. Plus, when you are fortunate enough to be on a show I love the way everyone pulls together every week to make it as good as it can be. We become like a family.

What advice would you give aspiring actors?

Be natural and don’t over think it. Find a support system but be prepared that not everyone will understand your desire to be an actor.  It’s not an easy job if you’re a slacker because even when you are not on set you need to be working on yourself and your skills. I even consider the audition a job because you’ve got to get in there and work for the role. And if you don’t get the part, you’ve already learned from the audition so keep the lesson and go on to the next audition and the next and the next.

Which actor/director would you most like to work with?

Which actor/actress do you admire most and why?

Julianne Moore because she’s just amazing and watching her finally win the Oscar made me so happy. I love a career that doesn’t rush itself. 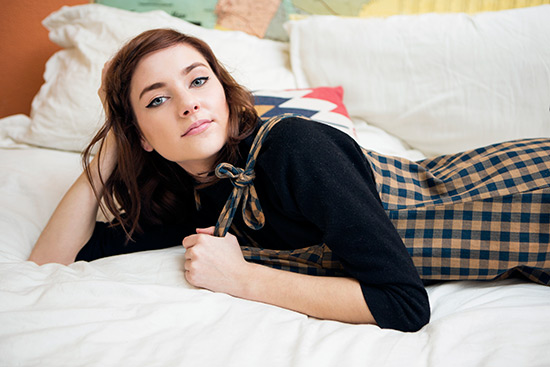 What is your favorite role that you have played?

Playing Brenna Carver in “Chasing Life” is right up there at the top of my list. The feedback from young people who, like Brenna, are questioning their sexuality, has been very touching. It’s great to play a character that touches so many people. Abby, my character in Disconnect (a film with Jason Bateman) was also a favorite of mine. The movie deals with attempted suicide, our addiction to the Internet and family. Emotionally, it was a hard role, but it was so rewarding.

What’s the hardest part of being an actress?

How was working on X-Men?

I look back on that now and I think of how comfortable I was on that set. My scene was with Patrick Stewart and Sir Ian McClellan, who are just like the best of friends in real life, and I loved just sitting with them and listening to their stories of the theater and their growing up years. They were so kind to each other. That’s a good memory.

You have worked with A List celebrities like Jodie Foster and Sean Penn. Tell us about that.

I worked with Jodie on “Flightplan.” That was the first movie I did when I moved to LA. My role wasn’t huge but since it was filmed on a plane I had to be there every day for continuity-even when I didn’t have a line. She is a such a great role model and I learned so much just by watching her. We had to film Halloween night so she threw a costume party after we had wrapped. Most movie sets don’t care if the kids have to work on Halloween.

I would love to work with Sean Penn again. He had to cut one of my scenes in “Into the Wild” and when he saw me at the cast and crew screening he apologized for it. Not many people would take the time to do  that.  I was just happy to get to work with him. I’ve been pretty lucky because when I was young I was able to be a part of some huge blockbusters but I didn’t have the pressure of having to carry a big role at a young age. And for some reason every small role I booked like that required more time on set than normal so I was able to hang around and watch and learn.

Tell us about your character in Chasing Life.

Brenna is feisty, rebellious and kind even if you didn’t believe it when you first met her. As the baby of the family, her mom, sister and grandmother try to protect her but Brenna usually thinks she knows better than everyone else. In season one she is dating both a guy and a girl for awhile. I love that Brenna is confused because she likes two people and not because one is male and one is female. She doesn’t believe in labels. Love is love for her.

I love to write.  Maybe a little producing in my later years. I would love to direct something some day. Even if it’s small and just for me. Maybe a short film.

If you weren’t an actress, what do you think you would be doing for a living?

I would most likely be in costume design. Fashion history is fascinating. I have a vintage store with my mom so I am always out hunting for clothing from the 1930s or earlier on up to the 1980s.

It’s different every time and depends on who I’m working with. I like not having a specific way of preparing every time and getting the chance to learn from my peers. My acting coach, Lisa Picotte once tied me to a chair when I was 14. I was playing  a girl who had lung problems and she wanted me to know what it felt like to struggle. I was up for it and it was helpful.  We laugh about those times now. 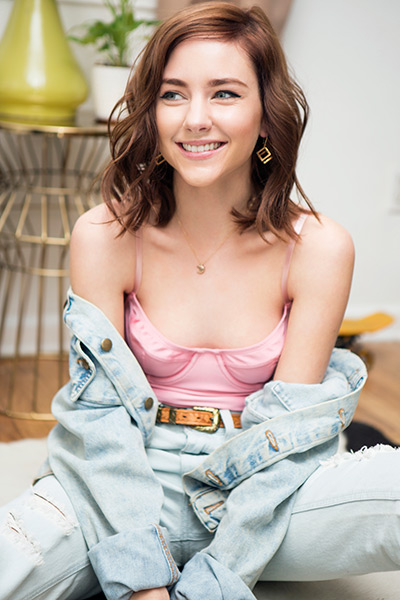 What is the funniest thing that has ever happened to you on set?

When I was 13 I did a movie called “Yours Mine and Ours” with Dennis Quaid and Rene Russo. There were 18 kids in the film and we had to do a scene involving a paint fight that took 3 days to film. Every day we slipped right back into our crusty wet paint covered clothes. It was pretty gross sometimes, but every kids dream is to be a mess rolling around in paint, right?

Hang out with my friends. A lot of them mean so much to me so getting to hear about what they’re doing on off days is great. Catching up and sharing new music. I’m trying to get into water coloring again.

What music can we find on your iPod?

Right now? I’m loving the Dixie Cups, Shovel and Rope has a good album called Swimmin Time. James Bay is super talented and on the rise. Not to mention girls will probably swoon.

Super excited to get back into filming Chasing Life. I met with the writers the other day and I’m very excited about all of the story lines.

If I’m working I like to get to set earlier than my call time so I can grab breakfast from the catering department, settle in and visit with everyone and go over my scenes for the day. If I’m not working I love to sleep in, walk the dog, hang out with friends and try new restaurants. Maybe I would do some vintage shopping at thrift stores. Write a bit. I’m really enjoying cooking lately- cooking in the crockpot. It always makes me feel accomplished but it’s actually the easiest way to make dinner.

Drink: Non alcoholic- iced tea. Alcohol– jameson and ginger.
Restaurant: Dominick’s
Travel Destination: I want to travel to Europe this year. Germany has always been on the list. I’ve never had a tropical vacation so that would be fun too.
Designer: That’s hard. Maybe Zac Posen.
Singer: Freddy Mercury
Quote: when Johnny Carson asked Bette Davis for advice on “the best way an aspiring starlet could get into Hollywood,” Ms. Davis replied without hesitation, “Take Fountain!”
Book: The Measure of a Man by Sidney Poitier.
TV Show: Transparent was wonderful.
Sports Team: LA Kings 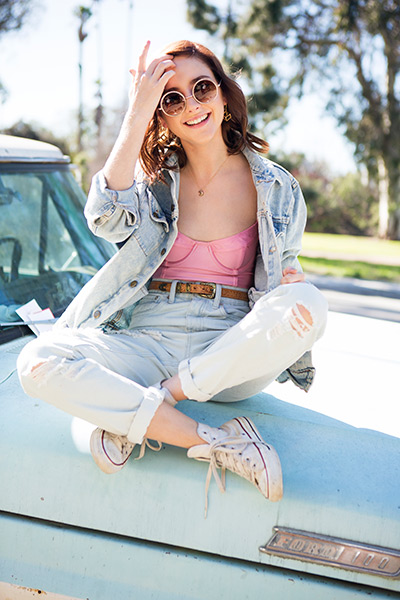